Peconic Bay Scallops Come Back From the Brink of Extinction

How we almost lost the Peconic Bay scallop—and why we’ve almost got it back. 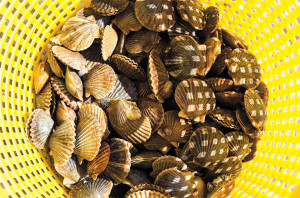 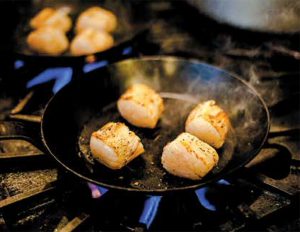 That this incredulous, thankless question was ever posed around my family’s table suggests that I grew up in some odd, alternate universe where we not only took the fruits of our local estuaries for granted, we believed they were something to complain about.

This was back in the 1970s and early ’80s on eastern Long Island, where Peconic Bay scallops ruled not just the table but the local economy, too—to the tune of several million dollars annually.

Bay scallops are much smaller and sweeter than sea scallops. But you might ask, What’s so great about a Peconic Bay scallop? What makes it any different from a bay scallop from, say, Nantucket or Florida?

In a word: terroir. Just as two identical grapevines grown in two different fields can yield completely different-tasting wines—or, perhaps in a more fitting example, the way an oyster from one part of the watery world has a completely different flavor, size and texture from another (would you ever mistake a Kumamoto for a Blue Point?)—so, too, does the Peconic Bay scallop stand apart.

Thimble-size, cylindrical and with a sweet, velvety flesh, they were so incredibly plentiful that their shells were nearly a nuisance on the rocky beaches of Shelter Island, where I grew up, and in the those sandy shelves lining the waters of the Peconic Bay, which ebbs and flows between eastern Long Island’s North and South Forks.

“We live in a world in which size matters, whether it’s your car or your scallop,” he continues. “Customers always want to see the big ones, but the smaller bay scallops are typically a lot more tender. They’re firmer and sweeter than Nantucket’s, which tend to be softer. And they usually have higher content of sugar, so when you sear them quickly you get this great caramelization.”

Back in the day, my dad would get bags of bivalves so cheaply from the local baymen, he sold them alongside the “turf” in his butcher shop, and brought them home for us to eat on a weekly basis. At mere single-digit dollars to the pound, it was an inexpensive way to change up our family’s usual diet of pork chops and chicken and hamburgers.

On the first day of scallop season, which typically runs from fall to early spring, it seemed like at least half the able-bodied boys in the high school wing of Shelter Island’s one-building school were absent, out helping to bring in a big haul to sell. Even my sister Laura spent a cold winter or two in our neighbor’s garage, squat knife in freezing hand, opening a mountain of scallops to earn a little extra cash.

But for the region, scallops earned more than just a little cash—it was a lot. According to a report from Cornell Cooperative Extension, Peconic Bay scallops contributed nearly half of eastern Long Island’s $10 million commercial fishing industry annually, supporting up to 600 full-time jobs for scallopers alone.

“It’s hard to describe if you weren’t there—it’s hard for anyone to imagine because there were so many scallops when I was growing up,” says lifelong bayman Ken Clark, whose family were part of the earlier waves of settlers of Shelter Island centuries ago, and who have made a living from the local waters for generations. “There were hundreds of people catching [scallops] for months. There’s nowhere as many as there used to be.”

That’s because in 1985, the unthinkable happened: The Peconic Bay scallop all but disappeared. In its place was a choking algae bloom that turned the waters of the Peconic Bay from pretty blue-green to a frightening coffee-brown. It didn’t look good, and it wasn’t. Dubbed the “brown tide,” its source was a bacteria-size, single-cell algae that exploded all over eastern Long Island’s waters, keeping bathers on the beach and, beneath the surface, taking a much more sinister toll. It was so invasive, it squashed other healthy algae, some of which the Peconic Bay scallop relied upon for food. But that wasn’t all it killed.

The murky, mysterious algae also prevented light from reaching the sea floor, where bay scallops nestled in a local seagrass called “eelgrass.” The eelgrass needs that dappled sunlight to grow, and when it didn’t get it, began to die off. No eelgrass, no scallops.

But it wasn’t only scallops’ predators that were the danger. Bay scallops are filter feeders, and spent an inordinate amount of energy filtering out the brown-tide algae they can’t digest in search of something they could. Inevitably, they starved to death.

By the mid-’80s, Peconic Bay scallops were on the brink of extinction. No cries of “Scallops again?” were heard ’round the dinner table. For a frightening couple of decades it seemed as if the memory of those sweet, plump, tender shellfish would remain just that: a memory.

“I do remember eating them my whole early life,” says Pasternack of childhood family treks to eastern Long Island. As he grew up, those once-abundant shellfish his parents picked up from a little white shack just before old Montauk Highway suddenly became scarce. “They just disappeared, and we didn’t know why.”

But after the total dropoff of the ’80s and slim pickings of the ’90s, things began to turn around, thanks to dogged work by Cornell and Long Island University, federal and state grants and volunteer programs like Southold Project in Aquaculture Training (the acronym SPAT is also the name for the shellfish at its smallest and most vulnerable size). These programs and others like them have been filling fishmonger shelves with quart containers full of the cream-colored sweet little orbs.

While the restoration has many moving parts, central to the success has been funding to reduce pollutants leaking into the estuary via stormwater and wastewater treatment plants. Then there’s the work toward the restoration of the eelgrass by Pickerell and his team, who find sites well-suited for eelgrass, and conduct test plantings. “If these work,” he says, “we scale-up to larger and larger plantings until a self-sustaining population is created.”

“ ‘Seeding’ the bays involves the creation of large numbers of bay scallops that will survive to spawn, and thus produce greater numbers of future generations,” says Smith. This begins at the world’s largest bay scallop spawner sanctuary, which houses over half a million baby bays until they are of spawning size. Then, under the watchful eye of Smith, his colleagues and SPAT volunteers, they are carefully spawned in the safety of nets and cages at the county-owned, state-of-the-art shellfish hatchery in Cedar Beach. The goal: to reestablish the bay scallop and associated fisheries to numbers that existed before 1985.

“To date, the project has been responsible for over $3 million in direct landings of bay scallops worth $17 million to the regional economy,” Smith says. “Hundreds of jobs have been created and a heritage industry partially restored.”

Brown tide has not been completely eliminated and the work is not nearly done, but the decades-long efforts have paid off. Each year has produced more Peconic Bay scallops than the one before. And while we’re not even near the days when the opening of scallop season coincided with a drop in high-school attendance, the words “scalloping industry” aren’t yet an oxymoron, either. Official statistics weren’t ready at the time this story was written, but it looks like each of the last two years will easily beat out 2010’s decent 40,000-pound harvest (that’s weight in meat, not shells), which earned a little more than a half million in profit.

Recently, I went to a Peconic Bay scallop and oyster tasting at Jimmy’s No. 43 in the East Village, with Cornell aquaculture specialist Gregg Rivara and his oyster-farming wife, Karen, telling salty tales while shucking shellfish and opening bivalves to a small but hungry crowd. I brought along a friend who’d never had a Peconic Bay scallop. As we scooped the meat from the shells off plates piled high with Rivara’s in-shell version, gently cooked in butter and wine, my friend’s eyes grew wide as she raved: “I’ve never had anything like this! It’s…sweet and so tender. My God, I love them!”

It was exciting to see someone discover that unique flavor for the first time, and as I sat there savoring the last of mine I thought maybe, just maybe, the bay scallop won’t become the kind of history that only old timers talk about. If we’re lucky, Long Island kids will be complaining about them for generations to come.

If you open Amy Zavatto’s freezer too fast, you might break a toe when frozen blocks of Peconic gems fall out.