Delicacies by the Sea

Saga is a wonderland of rice, tea, nori, sake and sesame. 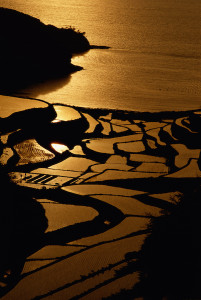 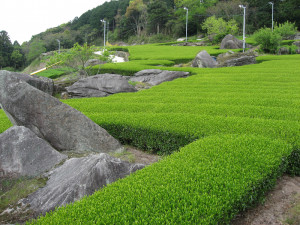 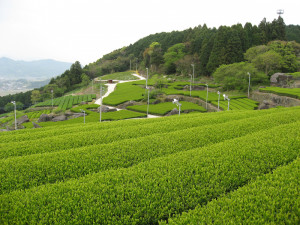 Green tea gets the gold. A Saga-born monk brought sencha to the common people in the 18th century. Today the region grows the finest tea in Japan. 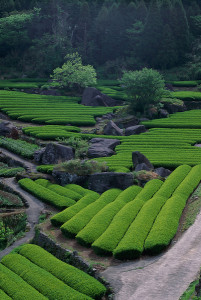 If your passion is pottery, you likely know Saga, Japan, for its celebrated ceramics, or perhaps for its international hot air Balloon Fiesta. But the prefecture’s rich aquatic and agricultural bounty, while virtually unknown in America, is just as spectacular. For centuries, its pristine fresh water has nourished high-quality rice harvests, sake breweries and the finest green tea. Artisans make small-batch sesame products and palate-prickling, chili-spiked yuzu paste, while the Ariake Sea’s nutrient-rich waters yield world-class nori.

The pace of life is relaxed here in the smallest prefecture on Japan’s southernmost island of Kyushu, but it once teemed with over 100 feudal clans. As Japan went through a period of rapid modernization in the late 19th century, samurai fiercely loyal to the old order attempted to overthrow the Emperor Meiji in 1874; the coup failed but the area is still typified by taciturn independent thinkers, quite different from their outgoing neighbors in Fukuoka.

In American terms, Saga would be more Maine than Miami, its terrain dotted with tiled rooftops, variegated green forests, terraced tea farms and barley fields. Lately it’s developed a reputation for high-quality beef and luxury crops of strawberries and tomatoes. Here’s a sampling of the region’s prized ingredients:

Nori: “When you think of mountains, you think of Fuji; when you think of nori, you think of Saga.” That’s the catchphrase of Saga Prefecture Fishery Cooperative Federation, and it’s entirely appropriate: The prefecture is the largest and best nori producer in Japan. The seaweed sheets used for rolling sushi are so important that they were once were called “black bills” and used as currency. Fishermen here cultivate nori by seeding seaweed in oyster shells in nets attached to poles. The plants grow rapidly in the swaying waves and, at picking time, a portion is left on the nets, so the plants can produce several more harvests.

Tadanori Egashira, sales manager for the cooperative, explains that commonly seen green sheets of nori pocked with holes are likely less-expensive products from China or Korea. The secret to Saga nori’s deep color and concentrated flavor: very cold bay temperature and wind exposure resulting from a nearly 20-foot difference between high and low tide. Equally essential are the bountiful freshwater tributaries that deliver a wide variety of micronutrients to the bay. In addition to sushi-ready sheets, the Saga fishery cooperative makes a delicious raw paste (namanori) of seaweed just pulled from the ocean.

Sake: Joji Koga’s family has been in business for 13 generations, making his company, Madonoume, not just the oldest sake brewery in Saga but also “older than America,” as he likes to say. Today Madonoume makes a variety of aged sake and shochu (a distilled spirit) from both rice and barley. For his nadeshiko shochu, Koga uses wild yeast taken from the pink dianthus flower, responsible for the sake’s floral notes. Koga ferments sake from January through March, and shochu in the hotter months from April through October, as it requires a higher temperature. After experimentation with metal tanks, about 40 years ago Koga returned to brewing sake in an oke, or traditional wooden barrel. The wood imparts a subtle aroma, and the open fermentation allows wild yeasts in, adding a more robust flavor. In a corner of his cool, dark warehouse Koga stores 32-year-old aged sake in a porcelain cask, which he says he’ll drink when his son, Madonoume’s master brewer, marries.

Fermented Sake Lees: Sake brewing long ago led to the tradition of using sake lees (the pressed sedimentary solids that remain after fermentation) to pickle vegetables, known as sakekasu. With the bounty of the Ariake Sea at their feet, explains Yaso Takehachi, a third-generation sakekasu maker at the family company, Takehachi, it was also natural to use the lees to preserve all kinds of seafood, from black cod and Spanish mackerel to scallops and squid. As the sakekasu is laid down in layers, a worker stomps on it to soften the lees, not unlike old-fashioned grape crushing for wine. The mash ferments for 60 days, then it’s ground and sweetened into a creamy, boozy, sublime paste. The choice of seafood is large because, as Takehachi explains, “There are all kinds of things in the Ariake Sea you don’t find elsewhere.” His favorite is fermented umitake, a crunchy bivalve similar to the clam.

Yuzukosho: The Mifukuan company headquarters look like a sleek, modernist take on a traditional Japanese farmhouse. The same impeccable taste is evident in Hirohide Kawahara’s beautiful line of yuzu products, favored by many well-known Japanese chefs for their rich, pure flavor. Although originally used as a condiment instead of wasabi to accompany raw fish, chefs and home cooks now use yuzukosho (citron-chili pepper) in soups, hot pots and to season everything from tofu to steak and pasta. Preserved in salt, the citron and pepper mixture ripens for more than six months to develop its flavor. Kawahara calls his version yuzugoshow and offers it in paste, liquid and powder form. Every ingredient is organic and local, he notes, even the mineral-rich Ichino salt extracted from the nearby Tsushima Strait. The products are made in micro-batches in a gleaming state-of-the-art facility that feels like it’s operated by NASA.

Sesame: The king of sesame seeds in Saga is Hideki Takao. Although sesame was cultivated widely in Saga during the 19th-century heyday of the Nabeshima ruling clan, production had fallen. Now, Takao and fellow farmers are trying to revive it as a staple crop. His company Manten (meaning “perfect score,” and an exhortation to himself to go beyond that) produces 20 different products ranging from ground white, golden and black sesame seeds to sesame oils and pastes. He also makes a deliciously addictive cookie of rich shortbread topped with roasted white and black sesame seeds called gomasabure (sesame sable). Manten seeds are roasted one bucket at a time, then ground by a team of five women and one man, says Takao, because women are “much more critical tasters.” Perhaps it’s true: His ground white sesame seeds and black sesame oil both won gold from the Belgian Monde Selection competition.

While many of Saga’s best-known foodstuffs descend from centuries-old traditions there is still room for innovation.

Seafood and vegetable noodles: “Irrepressible,” is the adjective that springs to mind to describe Fumio Yoshimoto, former farmer, government office worker and Encyclopedia Britannica salesman, who’s taken it upon himself to create imaginative ingredients that are pure, healthful and that minimize waste. As president of the company Saganoito, he came up with a way to incorporate less-than-perfect nori into seaweed soba, udon and pasta. Yoshimoto’s next product was born when he learned that Saga’s asparagus producers waste approximately 16 percent of the yearly crop, or 32 tons. He developed a process of drying both the discarded stems and the more mature green ferns, grinding them into powder and using locally sourced flour to make preservative-free dried pasta with it. Asparagus is rich in nutrients, including the phytonutrient lutein (considered beneficial for eyesight), a big selling point for health-conscious Japanese.

Green tea: Barely 60 miles from the port city of Nagasaki, Saga City is located on what was once known as the “Sugar Road,” for the European sweets that made their way from Nakasaki to commercial centers and caught the fancy of the Japanese. Chinese Zen Buddhism and sencha, or green tea, were two other imports that left their mark on Saga. Today the tea-growing town of Ureshino near the border of Nagasaki Prefecture is known for producing among the finest green tea in Japan.

The Saga-born monk, poet and calligrapher-turned-tea-peddler Baisaō brought sencha, until then reserved for the elite, to the common people in the 18th century. Offering the finest brewed tea in return for donations to sustain a humble life of Zen purity, he attracted the widespread admiration of the literati of his era. There is even a nonprofit dedicated to preserving his legacy and sencha-do, or the way of green tea. Says Koyugai Baisaō Honoring Society board chair Kimiko Kawamoto, “There would be no teahouse culture in Japan if it were not for him.”

Special thanks to Shigeko Fuke for making this story possible. To learn more about Saga City visit city.saga.lg.jp/en/