The Story Behind the City’s Best Taps 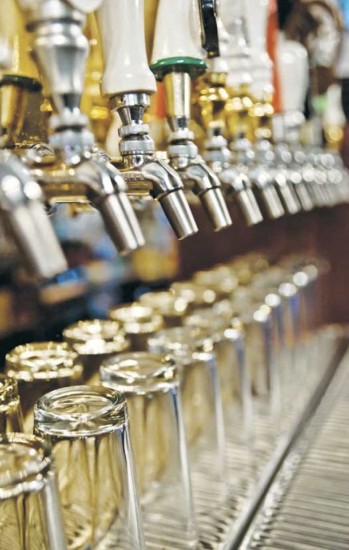 The big secret behind the city’s best draft beer isn’t clandestine kegs of small-batch suds delivered by a local brewer, or some celeb bartender who knows the proper way to pour. Instead it’s the plumbing—thanks to a humble draft beer system installation and maintenance company launched by Dave Moore back in 1995.

If you drink draft craft in Manhattan, you’re familiar with their work: Not only does the aptly named Pipe Dreams likely clean the lines of your local—d.b.a, DBGB, Colicchio & Sons, Spitzer’s Corner, The Ginger Man, Heineken Corporate Headquarters, Peculier Pub, Gramercy Tavern, Zum Schneider and Amity Hall, shown here, for starters—but the outfit probably put them in, too. They’re behind some of the city’s most beloved taps, from the ones that rest along the countertop at Bleecker Street’s Blind Tiger Ale House—a serving set-up appropriately known in the trade, says Moore, as an Irish Coffin—to Amity Hall’s one-of-a-kind double-decker draft system and the new high-tech basement beer refrigerator room at GMT in Greenwich Village.

In short, they’re the reason your Victory Prima Pils tastes crisp instead of like butterscotch (that’s caused by the buildup of a chemical compound called “diacetyl”), or your Guinness stout comes with its tightly knit cap of cream instead of three inches of foam. (Beyond a symbol of something gone awry in a draft line, those bubbles are pricey, too. Says Moore: “No bar owner wants to lose half of a $700 keg as bubbles down the drain.”)

The concept of clean taps and highpowered draft systems might seem like a no brainer in the age of a Whole Foods Beer Room—yep, Pipe Dreams maintains those, too—but when Moore first moved to Manhattan, it was a different milieu.  A California native and graduate of Portland State in Oregon, he came of age drinking microbrews. But when he moved to New York to work on Wall Street in the early 1990s, he recalls, the Big Apple was throwing back Bud, Coors, Miller and Heineken. Seeking likeminded drinkers, he quickly ditched the office for a job delivering some of the city’s first craft kegs for the beer distribution company then owned by the new Brooklyn Brewery. But when he’d stop to savor a pint from their portfolio after work, something tasted funny.

Moore says mainstream beer doesn’t change much even when things go wrong. “But with Brooklyn Lager and Sierra Nevada,” he says, “you know what a good one is, and you know what one is supposed to taste like.”

Heading down into basements to try and help barkeeps fix their beers, he was surprised at what he found: kegs connected to musty, rusty air compressors stuck in a corner—and, more often than not, a litter box, used by the cats the majority of bar owners kept to rid their establishments of rats and mice. “You’re putting that,” says Moore of the rancid air, “in your beer.”

Just 20 years ago, draft systems were in the dark ages, composed of stainless steel piping, air compressors and maybe a simple tank of carbon dioxide, as opposed to today’s special bespoke-for-beer gas mixes and high-tech plastic tubing that includes a layer of coolant to keep the brews cold en route. (Not to mention extras like gas blending boxes to extend the life of kegs or special foam detection devices.)

“Beer is a living thing, so stuff grows inside the lines,” says Moore of the black goop he sometimes still finds. But those old set-ups were designed at a time when most brews were variations on a watery theme and most drinkers didn’t know much about beer, so even if yeasty bacteria took over the pipes, the subtly funky flavor didn’t seem to matter. Neither did the type of beer:

Back in those days, jokes Moore, he often found a place with four different taps, all pouring from the same kegs of Meister Brau.

But the bartenders Moore was delivering to were serving better, more expensive beers to customers who could tell the difference—as a result, they needed better equipment. And Moore—who also has a background in art installation and auto body repair—started installing lines on the side. One of his first jobs was the original Blind Street Ale House on Hudson Street, whose taps he built for a stake in the business. (He’s no longer an investor in their new location, though he does own a piece of Williamsburg’s Brooklyn Ale House and Zum Schneider, whose taps are plenty impressive.)

Eventually he left the delivery biz to start Pipe Dreams fulltime—named, he says, because nobody believed people would pay him to put in pipes—building draft systems from the bottom up and sending in one of nine draft technicians trained by his colleague Theresa Vitug to keep them clean. And thanks in large part to the company—they now have more than 700 clients between 125th Street and Park Slope, Brooklyn—good beer that tastes like it should is now almost as easy to score as a pitcher of Bud Light.

Not that Moore takes any chances: “If I go for a beer in a bar that I don’t know,” he admits, “I’ll stick with a bottle.”