In The Barrio, a Flurry of Snow Cones

Andrés Fabre learned the shaved ice trade from his father, who pushed his own cart on the Lower East Side for 18 years. 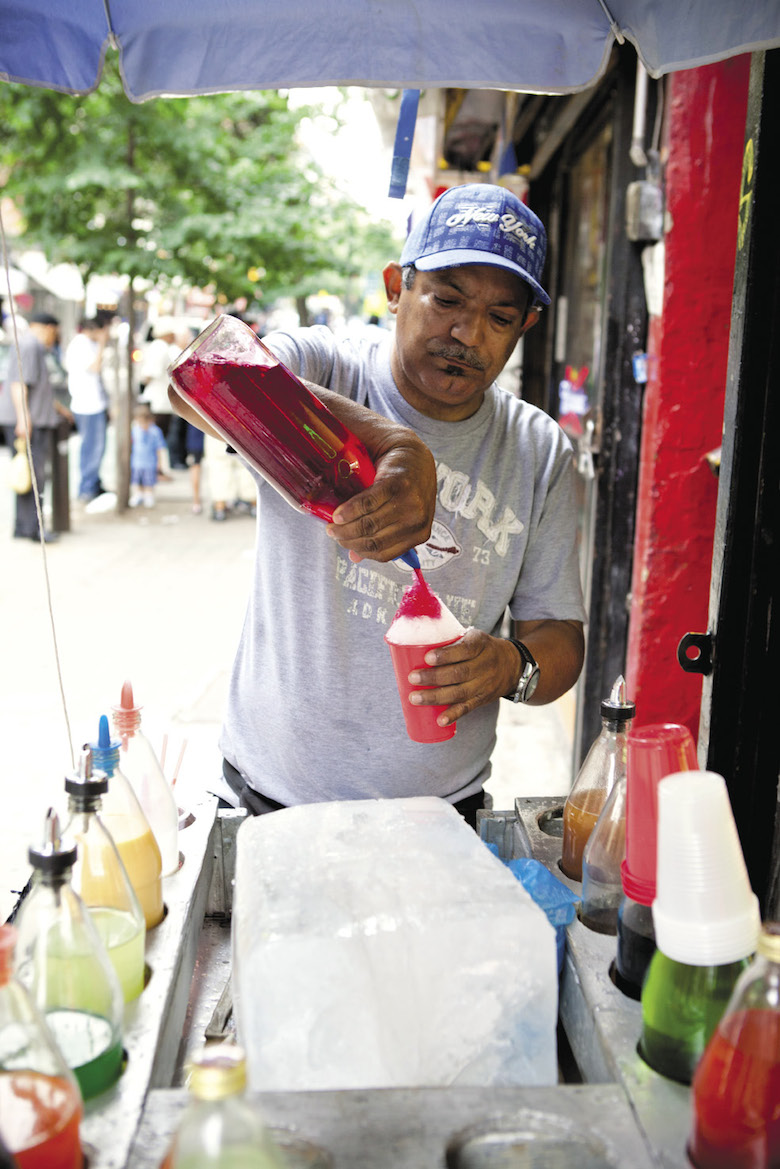 Whether it’s the Lower East Side, East Harlem or Washington Heights, people from the hottest climates seem to know the most about making it snow. On scorching summer days, Latin American and Caribbean pushcart vendors uptown and down keep the neighborhood kids cool with made-to-order mounds of syrup-drenched shaved ice.

Down on the corner of Clinton and Essex Streets, Andrés Fabre has operated a shaved ice cart since immigrating to the United States from Santo Domingo in 1996. He learned the trade from his father, who pushed his own cart on the Lower East Side for 18 years. Working with an enormous block of ice and old-fashioned metal hand scraper, Fabre, 52, packs the delicate shavings into a plastic cup then shapes it with an inverted funnel to form an icy peak.

He offers a variety of flavors—classics like cherry, grape, orange and lime, plus tamarind syrup from nearby Asian markets and strawberry he sources directly from the Dominican Republic—but the kids place their orders by color. They’ll ask for a swirl of red and orange plus a splash of deep purple or bright green. For them, it’s not about having your favorite flavor, but having all of them at the same time.

Though the casual observer may see just a snow cone, their names are as varied as the vendors’ backgrounds. Dominicans call them frio-frio (“cold-cold”)—which is what you might mumble to yourself when you spot a telltale umbrella and realize relief is only a few steps away. For Mexicans, it’s a raspado (meaning “scraped”) for the motion that produces even shavings that best absorb the flavors. If you’re Cuban, it’s a granizado for the fast-melting grains of ice that dissolve into a refreshing slushie as you work your way through it. Puerto Ricans call them piragüas (“piramide” + “agua”) for the ices’ distinctive shape—a pyramid-of-water mirage that appears just when you need it most.

Picking up one of the spouted clear glass bottles that line his cart, Fabre douses each custom creation with incandescent fruit syrup, then drops in a Day-Glo straw and hands it off to the waiting customer as the line keeps forming.

Andrés Fabre learned the shaved ice trade from his father, who pushed his own cart on the AndrésLower East Side for 18 years. Photo credit: Nicole Franzen