To paraphrase the famous French epicure Brillat-Savarin, “Show me where you cook and I’ll tell you who you are.” 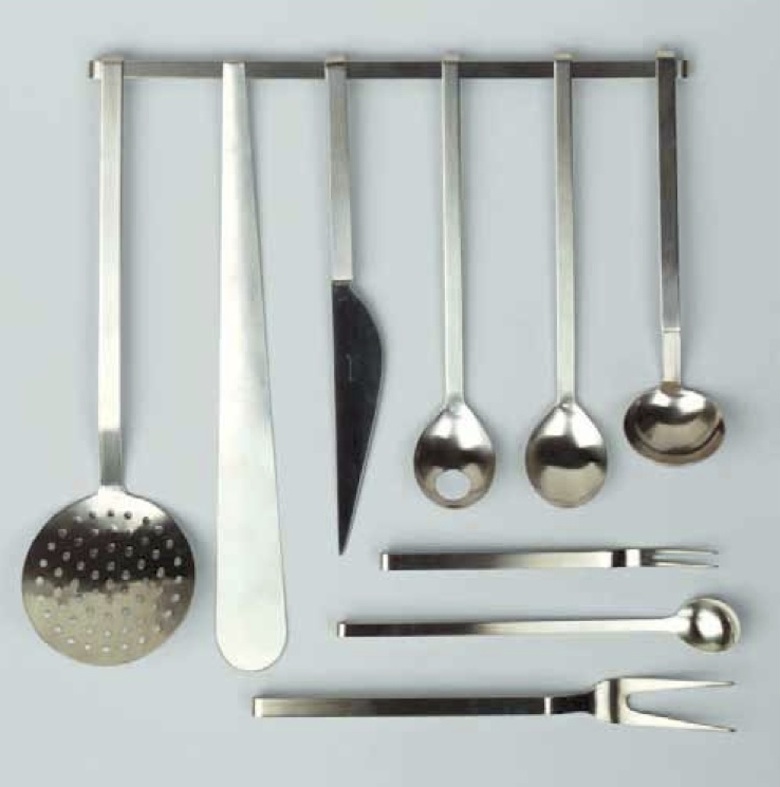 To paraphrase the famous French epicure Brillat-Savarin, “Show me where you cook and I’ll tell you who you are.” Stuffed with kitchen artifacts ranging from the sugar cube to the flow-through tea bag to frozen-food knives and plastic pitchers, the Museum of Modern Art’s “Counterspace: Design and the Modern Kitchen,” on exhibit through March 14, examines the evolution of culinary accoutrements as a window into 20th-century culture.

MoMA has acquired various cooking-related objects throughout its history, adding the iconic Chemex coffeepot to its collection alongside rarefied canvases, but a single important acquisition last year sparked the idea for this culinary-centric show. Post–World War I progressive architects’ utopian goal of bringing beautiful and functional design to the masses extended to a well-designed, efficient, hygienic and standardized “New Kitchen,” and Austrian architect Margarete Schutte-Lihotzky’s seminal Frankfurt Kitchen was the most lasting of these designs. When the Museum purchased it last year, MoMA curator Juliet Kinchin was inspired to make it the centerpiece for an exhibit. “The museum has collected certain functional, well-designed and utilitarian kitchen objects since the 1930s,” says Kinchin, “but the Frankfurt Kitchen gave us a much larger architectural focus.”

The exhibit’s first section showcases the efficient kitchen design that flourished between the world wars, some of which were born of wartime technology: heat-resistant glass from Corning Glass Works, beakers from Coors Porcelain Co. and Wear-Ever cake pans. Schutte-Lihotzky’s rationally planned 1926–27 kitchen—with its built-in waste container and food warmer, aluminum storage bins and efficient countertop workspaces—was a compact, ergonomic wonder.  Ten thousand of them were manufactured as part of an ambitious project to address Germany’s post-war shortage of public housing.

The exhibit next examines the transformation of the kitchen in post–World War II America. As birth rates soared and suburbs boomed, fully automated appliances flooded the market. Tupperware and dishwashers starred in glamorous ad campaigns, magazine spreads and even movies. Refrigerators and ranges became highly exportable consumer products and even propaganda tools.  Take, for example, the famous 1959 televised skirmish between Richard Nixon and Nikita Khrushchev dubbed “The Kitchen Debate.” Nixon, showing off a model American kitchen, asked the Russian leader, “Would it not be better to compete in the relative merit of washing machines than in the strength of rockets?”

The exhibit concludes with an examination of the kitchen’s overt and hidden messages. A smart selection of artworks explores how the space serves as a symbol and can evoke a welter of emotions from nostalgia to loneliness and anxiety. Tom Wesselmann’s 1963 Still Life #30 embodies the optimistic abundance of the postwar period with a pink refrigerator door and a collage of all-American foods, including Rice Krispies, 7Up and Dole pineapple.  Martha Rosler’s 1975 feminist video Semiotics of the Kitchen lampoons that narcotic of the frustrated housewife, the cooking show.

Kinchin notes that a number of current kitchen design trends did not make it into this show: solar energy, recycling and the use of recycled materials, and the proliferation of kitchens in corporations and workplaces. I don’t know about you, but I’m setting the alarm clock in my cryogenic chamber for the 21st-century sequel.

Photo courtesty of the MoMA. www.moma.org