With Science, Shoots & Roots Bitters Aims to Capture the Origin of Their Ingredients 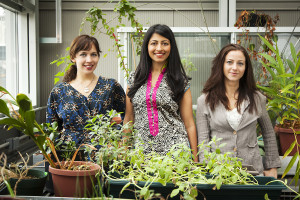 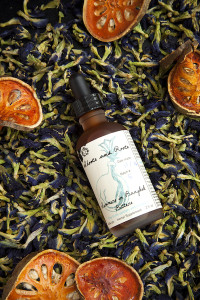 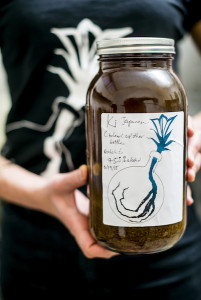 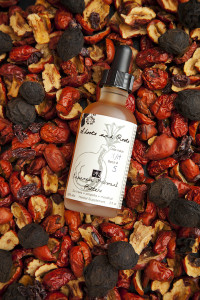 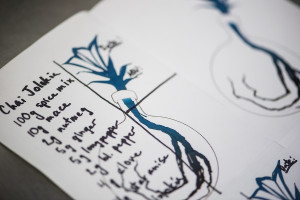 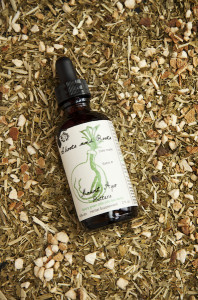 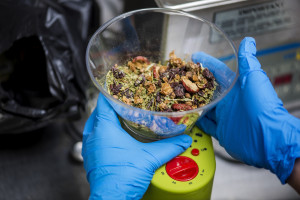 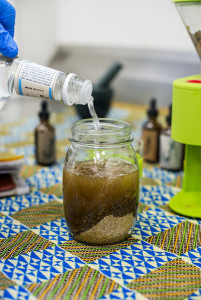 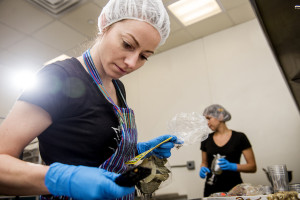 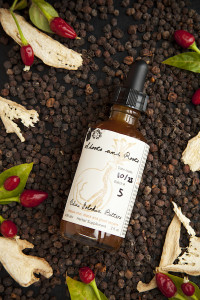 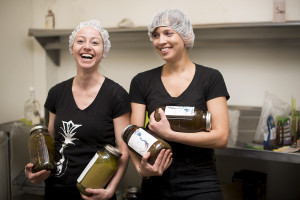 We can thank the olfactory bulb — a neuron-laden protuberance in our brain — for both our ability to identify smells and for our rich sense of taste. Because this scrap of tissue is smack dab in the limbic system, where emotion and long-term memory reside, it also links some smells and flavors with intense memories.

This is why, as Diane Ackerman put it, even a fleeting whiff of salt air or bay leaves and pork can transport us to “a childhood summer beside a lake in the mountains… a family dinner of pot roast and sweet potatoes during a myrtle-mad August in a Midwestern town.”

It’s just such invocations of place and experience that Shoots & Roots Bitters, a Harlem-based start-up run by three botanists, seeks to bottle up and drip-drop into your cocktail. Rachel Meyer, Ashley Duval and Selena Ahmed, the three women behind the venture, combine their scientific expertise with a passion for raising awareness about the incredible diversity of plants found around the world.

Each of their nine flavors of bitters aims to capture the spirit of the place where their ingredients — more than 200 flowers, fruits, seeds, stems and leaves — grow. Many of those species have so far escaped the notice of Westerners, despite having deliciously curious names and tastes, including the devil’s hand flower, the skullcap and the blue clitoria.

Bitters were not always in the plan for the three researchers, but botany was. Each one traces her plant-love to childhood, though diverse paths brought them to the lab.

Ahmed, an assistant professor of sustainable food systems at Montana State University, spent her formative years moving around the world. Call it mental terroir: She found that some of her most intense place memories — from Saudi Arabia to New Zealand to New York — were linked to the foods she ate there, and that those, in turn, channeled plants that grew nearby.

While young Ahmed had skimmed the surface of many places, Duval, now a researcher at the Yale School of Forestry and Environmental Studies, became intimately familiar with local flora by spending untold hours playing in her Northern California backyard. She gathered poppies, wild mustard, miner’s lettuce and more, mixing it all into potions in empty shampoo bottles (one of her earliest memories is having her stomach pumped after eating a mushroom found on an ingredient-gathering expedition).

Meyer, meanwhile, grew up in West Hollywood and wasn’t allowed to leave her backyard. But she started a nature club, loved pressing flowers and at some point “realized I could work at an herbarium and glue plants onto paper for a living” — an epiphany that led to a career as an evolutionary biologist at NYU.

The women’s paths crossed when they were all graduate students — Meyer and Ahmed at CUNY, Duval at Yale — and each enrolled in a consortium program at the New York Botanical Garden in the Bronx. The scientists soon began collaborating on projects ranging from investigating phytochemical diversity to creating a database of all known existing and ancient crop cultivars.

By 2008 the three had gotten into science outreach for the public, first through talks ranging from nomadism and baobab trees to the Silk Road and buckwheat, held at places like the American Museum of Natural History and the Rubin Museum of Art.

But eventually they added bars to their repertoire of venues, including a Christmas party at Kinfolk Studios in Williamsburg, which they co-hosted with Brooklyn Gin. There, the researchers served boozy extracts of the botanical ingredients that go into gin and explained the molecular components that give that junipery concoction its flavor.

“We found that people were more receptive and responsive to our work when we brought along physical specimens,” Duval says. And all the more so when those specimens were drink-able — and alcoholic.

At the Brooklyn Gin party, the botanists had their “aha!” moment. If people were this excited about single-ingredient extracts, why not take those infusions to the next level and create bona fide bitters? The idea was met with encouragement.

And just as the fictional White made the best meth in town, the botanists’ product, too, is arguably the most superior bitters around, easily outperforming the stuff cooked up by amateurs in its complexity and chemical harmony.

“We realized that the whole beverage industry in the city is really friendly: If you say you want to do something, they’re, like, ‘Yeah!’” Meyer laughs. “Plus, we had all published in academic journals together before we went into business, so we knew we could get things done under high pressure.”

So they began meeting after hours in Meyer’s 125th Street loft, which still serves as the company’s headquarters. They approached the art of making bitters like Breaking Bad’s Walter White did crystal meth — with a scientist’s precision, knowledge and discipline. And just as the fictional White made the best meth in town, the botanists’ product, too, is arguably the most superior bitters around, easily outperforming the stuff cooked up by amateurs in its complexity and chemical harmony.

For the first two years following Shoots & Roots Bitters’ debut, their unique flavors were only available at their special events and workshops. That changed in December 2013, when they launched a Kickstarter campaign and quickly exceeded their fund-raising goal, closing just shy of $17,000. The first bottles began shipping out last August, and Shoots & Roots Bitters is already featured on menus and shelves around town, including Duke’s Liquor Box, SOS Chefs and Mutual Trading Company.

Rather than just combining ingredients for flavor, each of their concoctions honors a single, special location — say, a mountain in the Philippines, the expanses of the Western U.S.— many of which are near and dear to their creators’ hearts. Summers in Bangkok, for example, recollects Ahmed’s childhood memories of Thailand, drawing upon an infusion of pandan leaf, Kaffir lime leaf, lemongrass, tamarind, turmeric and more to coax forth the tropical flavors of Southeast Asia.

“It was kind of a weirdo one, but it was cool,” Denton says. “It tasted like a Tootsie Roll on acid.”

“Their bitters are complex enough that you can have them sort of on their own and not mess about with them too much,” he raves. “But you can also try to take those flavors and amplify them or pull them out so you’re getting an even richer experience.”

That complexity is the fruit of many hours of research and experimentation. The researchers begin by consulting the scientific literature to ensure a potential ingredient is not a rare or imperiled species, to certify that it’s safe to consume and to see what potential compounds they might like to extract. They avoid species that require the entire root to be destructively pulled up, instead favoring clippings, fruits, flowers or seeds.

The next step is evaluating flavor profile in the lab, oftentimes down to the molecular level. Additionally, before any extracts wind up in bitters, the women first leave samples bottled up for a year, just to make sure the flavors stand the test of time in a liquor cabinet.

“It’s a good thing, because some flavors started out very strong but faded over time,” Duval says. “Wasabi no longer had the burn — it just tasted sweet — and black cumin, well, I was so hopeful — but nothing.”

“We’ve had some awesome experiments, and some hideous ones,” Ahmed adds. “We’re not afraid to fail.”

Rather than just combining ingredients for flavor, each of their concoctions honors a single, special location — say, a mountain in the Philippines, the expanses of the Western U.S.— many of which are near and dear to their creators’ hearts.

After ensuring an ingredient is sustainable, harmless, flavorful and lasting, only then do the three scientists begin tinkering with combinations. As a rule, each bitters blend must contain at least 10 different plant parts or species, and must hit several flavor notes. For example, Ki Japanese Arboreal — designed to invoke Japanese old-growth forests — begins with a smoky, peaty profile. This melts into a tart plum, reminiscent of umeshu but without the sweetness. The experience then concludes on a coniferous note, giving the impression that you have just sipped on a tree.

To produce these complex perfumes of smell and taste, the researchers draw from their training — phytochemistry, to be precise. In Hot Bread Kitchen’s incubator on 115th and Park Avenue, where they produce their bitters, they begin by grinding the plants and immersing them in a solution of ethanol and water — the same technique many DIY bartenders use. But that’s where the comparison ends. “We’re not all, like, ‘Hey, you, wanna try this stuff?’” Meyer says. “We use an evidence-based approach to our business.”

To wit: Post immersion, they use a device called a “sonicator” to break up molecules and release flavor, and then let that solution sit for a few weeks. After additional careful rounds of filtering, boiling and mixing, they are left with the boozy liquid essence of their floral ingredients.

Many of the ingredients they use are believed to have medicinal value by people who live where they grow. To attain these flavorful finds, Shoots & Roots turns to a highly diverse group of purveyors, including a mom-and-pop market in Berkeley, Mexican bodegas in Harlem, a single guy’s backyard in Yunnan and small-scale farmers and ethnic groups from around the world.

“The world is very diverse,” Meyer says, “and there’s a need to preserve that diversity.”

Those who have visited the places these bitters reference might take a sip and suddenly be caught up in a wave of nostalgia for the markets of southern India, or return in vivid detail to a particularly flaming plate of chilaquiles from a trip to Mexico.

But even with people who know nothing about the backstory behind the bitters or aren’t botanical buffs, these bitters have struck a chord. So much so that they’re having a hard time keeping up with demand (not least because they all still hold full-time jobs). They have plans to expand and recently made their first full-time hires to help out. New flavors are also in the works, and they’re ramping up relationships with city restaurants and bars while developing a non-alcoholic, kid-friendly line slotted for release this summer, which they plan to use as a teaching tool to get younger audiences interested in botany.

“We might be working ridiculous hours, but for us, this is the fun part of our week,” Duval says. “This is play time.”