At An Choi on Orchard Street real ginger ale gets goosed with dark rum for a sparkly Dark ‘n’ Stormy. GuS is the only soda served at the Green Table. 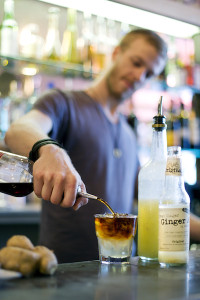 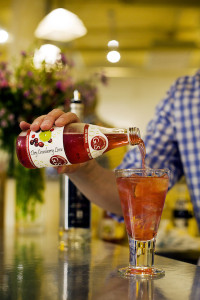 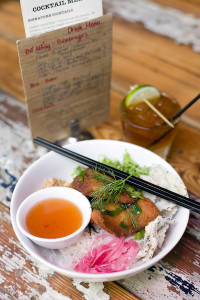 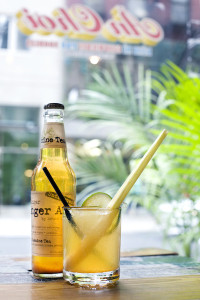 Many urban epicureans applaud our mayor’s efforts to kick cola to the curb. But come summer, even New Yorkers crave virtuous variations of the sweet stuff swilled across Carbonation Nation. Artisan-minded sodas made with pedigreed ingredients are increasingly on offer at hot watering holes and stirred by Manhattan mixologists. Here’s a look at some of these pop stars, all made in the New York area.

GuS, short for “Grown-up Soda,” is headquartered on East 57th Street and claims to be the first soda “made truly for adult palates.” Debuted in 2003, it’s made with cane sugar, and the flavors (Meyer lemon, grapefruit, black currant) certainly skew toward the drier end of the spectrum.

“They’re the only soda we have on our menu,” says Rick Hickman, beverage director of the Green Table, which sits in Chelsea Market and operates a summer kiosk in Battery Park, but philosophically is located at the intersection of seasonal, sustainable and delicious.

Hickman chuckles at the befuddled tourists who stop in on their way to the High Line or Statue of Liberty, expecting to slurp their usual Diet Coke. But even they quickly get with the (beverage) program. “Once they realize what we’re doing—that we’re local and care about what we’re serving—we usually get a positive reaction.” A particularly popular pairing? GuS Meyer Lemon with an order of seared Long Island scallops. Or better still, Hickman says: a splash of vodka.

Fizzy Lizzy: Founder Lizzy Marlin came up with the idea for this beverage biz during a Long Island bike ride when she mixed grapefruit juice and seltzer, and wondered why she couldn’t find the combination by the bottle. Today you can: Fizzy Lizzy is made in Jersey City, and flavors such as tart Cranberry and Fuji Apple are on offer at serious restaurants including L’Ecole at the French Culinary Institute, Perilla in the West Village and Ideya Latin Bistro on West Broadway.

At Ideya, the pineapple soda stars in cocktails: a refreshing, not-too-sweet Piña Colada (along with Cruzan coconut rum, lime juice and a splash of coconut cream) and the Goombay Smash (with coconut rum, Don Q Añejo dark rum and triple sec.) Owner Lauryn Small favors the line because its sweetness is subtle: “It’s not cloying,” she says.

Fresh Ginger Ale by Bruce Cost: Peer into the bottle of this unfiltered, pure cane ginger ale and you’ll notice chopped-up pieces of real ginger. No wonder it’s poured at the Porchetta and Momofuku Ssäm bars.

Made in Brooklyn, this spicy-tart libation has become a particular favorite for Dark ‘n’ Stormy variations.

“I love how he incorporated real ginger bits,” enthuses Tuan Bui, owner of the Lower East Side’s An Choi, where it’s mixed with Gosling’s dark rum, fresh lime and a splash of seltzer to make that sparkly, spicy, barely sweet standby. Bui says the soda, which has a little kick, can hold its own against zingy Vietnamese ingredients such as fish sauce, lime juice and chile peppers.

Bruce Cost also makes a Green Jasmine Tea ginger ale, which An Choi offers in another cocktail, the Hanoi Hostess, along with lemongrass, vodka and orange liqueur. The libation is perfect with his flavors, Bui says: “It’s refreshing and tart.”

Q Tonic: The idea for this company was born in founder Jordan Silbert’s Brooklyn backyard in 2004, as he sat drinking G&Ts with a couple of friends. Bristling at the high fructose and preservatives listed on a bottle of tonic water, he resolved to make a version worthy of Tanqueray gin. Four year later, he had perfected an artisan incarnation made with Peruvian quinine and organic Mexican agave.

Although the Tonic remains the brand’s best-known bottle, the line expanded rapidly, and earlier this year the company officially changed its name to Q Drinks. Other offerings include high-minded ginger ale, club soda and its latest addition, a spiced “Q Kola,” perfect for mixing with darker spirits like bourbon and aged rum.

But the Q Tonic is the darling of the mixology community. Bartenders from Locanda Verde and Freeman’s to Junoon and Kin Shop love the stuff—which is more than we can say for Mountain Dew.