A massive city wholesaler now sources from its own backyard. 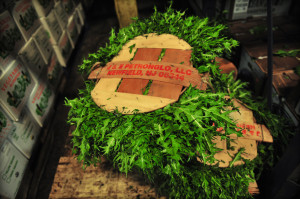 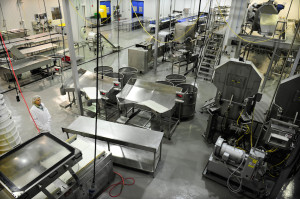 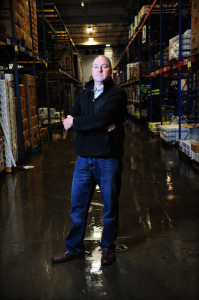 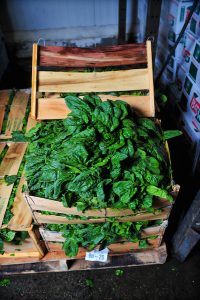 Few in New York have ever heard of Baldor. But while they’re not loved on Yelp or trending on Twitter, chances are, they feed you several times a week. That’s because they’re one of the city’s biggest behind-the-scenes businesses. A massive supplier of fruits, vegetables and fancy foodstuffs for the Northeast, they sell wholesale to restaurants and retailers. And for those who do know the brand, the first word that springs to mind is behemoth.

All told, the place packages thousands of orders, seven days a week, for supermarkets, hotels, culinary schools, corner stores, corporate dining rooms and thousands and thousands of restaurants from Philadelphia to Maine, including everyplace from your corner deli to the holy walk-ins at Le Bernardin, Daniel and Jean-Georges.

Yet over the last five years, this gastronomical goliath has gone seriously locavore. While they still scour the globe country by country, now they stake out our state—and those nearby—county by county. In between French mache, Italian “00” pasta flour and nine-pound pails of Canadian Honeycup mustard, you’ll now found washed-rind cow’s milk cheese made in Ghent, New York; heirloom tomatoes picked in Eastern Pennsylvania; and peppery purple microgreens grown on Long Island.

A 2008 press release, for example, didn’t just drop the terms “food miles” and “locavore” like old pros, but also detailed Baldor’s Catskill Mountains produce line and Hudson Valley cheese program—Baldor literally delivers the goods from them at least twice a week. And last year, in an event entitled “Radius 250,” 11 Madison Park chef Daniel Humm and some of his staff were bused up to Baldor’s tricked-out Bronx training kitchen to meet a dozen producers from around the region who grow their curlicued pea shoots or make their cheeses or smoked fish.

It might sound like lip service for local-obsessed chefs, but it’s also legit: Today Baldor serves as an all important hub for regional producers and likely moves as much locally grown food as the almighty Greenmarket, supporting farming communities of all sizes throughout our foodshed. (Though the city nonprofit may have taken notice: It now has its own wholesale arm, just a few blocks down the road from Baldor in the New Fulton Fish Market at Hunts Point.)

While they’ve long stocked upstate onions and Jersey tomatoes, Baldor certainly didn’t start out as the locavore chef’s food-service savior. The whole thing began as a side project of Balducci’s, whose once-legendary Greenwich Village flagship specialty supermarket was famous mainly for its imported fruits and vegetables. Opened in 1946 by Louis Balducci, an Italian immigrant, even in the ’90s the place was still one of the few in town stocking then-exotic foodstuffs like olive oil, arugula and basil. (Which we now take for granted precisely because companies like Baldor deliver them to so many outlets).

“At that time,” recalls Michael Romano, then the chef at Union Square Café, fresh ingredients were hard to find—“and forget about local.” In those days he’d just moved from market-manic kitchens in Europe to the Midtown stalwart La Caravelle, where he was surprised at how much product came frozen. “I’d come back to the States,” remembers Romano, now Union Square Hospitality Group’s chief of culinary development, “and you couldn’t get tarragon or chervil. We used canned chanterelles!”

But Balducci’s stocked the fresh stuff on lower Sixth Avenue, and chefs wanted to buy it in bulk. After dealing with white-coated shoppers who require special set-ups like 30-day credit, the market birthed an independent wholesale company in 1991—naming it with a mash-up of “Bal,” for Balducci, and “Dor,” for Grace Balducci Doria, Joseph’s granddaughter, who left the family business to open Grace’s Marketplace on 71st Street in 1985. (Balducci’s Manhattan shops shuttered in 2006 after the family sold the business to another brand, though there’s now a Balducci’s Gourmet on the Go in the Hearst Tower on 56th Street and a Balducci’s Express in JFK.)

In its infancy, Baldor had just one truck and one employee: founder Kevin Murphy, then married to a Balducci and now Baldor’s CEO. “I’d start at 5 am and end at 12 am,” says Murphy, “and then I’d wake up and do it again. It was the beginning of ‘I want fresh.’ And whatever they wanted,” he says of his chef-customers, “we got.”

Gotham Bar & Grill chef Alfred Portale, a customer since before the wholesaler was born, has long relied on Murphy to source the hard-to-find colossal asparagus he prefers, or whatever else his kitchen calls for. “If you only want baby lettuces under six inches,” says Portale, “Baldor will hand-select the lettuces so you only get those smaller leaves.”

Fresh Cuts—that produce-processing program with the automated onion peeler—was added in 1998 when Bruno Pison, the executive chef of the Plaza, wanted Portobellos. He needed a thousand of them, says Michael Muzyk, then Pison’s sales rep, but he also wanted them prepped, pronto. He wanted them cleaned, stemmed and gilled. “So I bought a Robot Coupe [a commercial food processor], some knives and a cutting board,” Muzyk recalls with the relish of a hunter recounting a big score, “and I got to work.”

With clients like the Plaza, Union Square Café, Gotham Bar & Grill, the 21 Club, The Carlyle Hotel, the Culinary Institute of America and the executive dining room at Lehman Bros. as early regulars—each with its own special requests—Baldor outgrew its first warehouse space in Long Island City by 1995. It would move twice more before it opened its current Bronx showplace, and has grown from just one employee to more than 700.

That includes 15 full-time buyers, who visit farms from Chile to the Catskills, test soil, chase harvests (ramps hit Virginia hills in March, then sprout in New York by May) and taste-test product when it’s delivered using a Brix scale of sweetness normally used for wine. Its 40-person sales force, meanwhile, is expected to know when Eric Ripert calls in and begs for more spinach by sunset, whether he means California flat leaf, four 2.5-pound triple-washed bags, a case of 10-ounce cellophane bags, baby greens, hydroponic or organic, to name but a few.

Or, more likely these days, that spinach will need to be local. If chefs were seeking colossal asparagus, Italian puntarelle and fresh chanterelles in 1991 (and organic California mache in 2001), by now they’re just as likely to request ramps from Pine Plains or Satur Farms’ North Fork frisée.

And so are their customers, says Paulette Satur, who runs Satur Farms on Long Island with her husband and co-owner, Eberhard Müller. By the time the term locavore hit the new edition of Merriam-Webster, “Baldor,” she says, “became interested in our products.”

The wholesaler’s trucks now stop at Satur two or three times a week for enormous orders of salad greens harvested mere hours before. Working with the distributor hasn’t just enabled Satur expand their already-successful business to accounts they couldn’t reach on their own, says Satur, whose husband himself used to buy from the company, but helps them sell mizuna, for example, when yields are too high.

“And it’s brilliant for them,” adds Satur, noting that empty Baldor trucks pick up product only after they have made deliveries on the island. That “backhauling,” as she calls it, saves real food miles—especially important as fuel prices climb.

Baldor’s been a boon to her neighbors, too. When Orient, Long Island, tomato grower Danny Latham got wind of Satur’s success, the notoriously reticent farmer called up to find out her secrets. “Hey, lady,” Satur remembers him saying, “I hear you’re doing a lot of business.” She connected him with Baldor, who now has the farmer growing multiple varieties of heirlooms for a premium.

Latham is prime example of yet another reason Baldor buys local, beyond saving on fuel or satisfying the latest request for an ingredient: A Green Zebra tomato that can be sliced in Midtown less than a day later isn’t just a better-tasting tomato, but also one worth a whole lot more to a chef. Think of it as Baldor’s “Dorothy” moment: They realized what could be found right in their own backyard.

Yes, Baldor does take a cut of the action, whereas growers who sell directly to customers at a Union Square stall make more cash per collard. But that’s not practical for all farmers, like those outside of Greenmarket’s 250-mile range or those growing commodity crops—fields of onions or tomatoes—that don’t make sense to sell at city markets. Big growers need big orders—by the bushel, not the bunch. Plus, Baldor has the ability to go pick up fresh product from anywhere they’re already delivering.

Baldor buyers now work side by side with small growers from the North Fork to larger farms along the Canadian border, says Terrulli, visiting their fields and facilities, going over crop plans as demand changes throughout the season, talking to growers about where demand is going. And their counterparts over in sales are in touch with chefs on a near-daily basis, so they can telegraph what’s top of mind for cooks to the folks on the tractors.

In fact some of Baldor’s biggest business was spurred by the State itself, in 2008. At that point, says Terrulli, large farms near the state’s northern border were growing cabbage typically headed for canned sauerkraut. But the price per head plunged to less than the cost to grow it. Hillary Clinton, then a New York State senator, connected with the company, says Terrulli, asking, ‘Hey, you’re Baldor, what can [some farmers] do differently to fit into your big program?’”

With Baldor’s help pinpointing what city chefs were hungry for—and their direct connection to that profitable new market—a few farmers stopped growing cabbage and started growing microgreens long before they became mainstream. And in Upstate New York, Baldor worked with Gurda Farms to get the grower topping and tailing their excellent Romaine and stacking the heads in lined bins before it went to the Bronx, earning the farmer more per head. Others, meanwhile, might be encouraged to diversify: Lynn-Ette & Sons Farms near the Canadian border now sells leeks and arugula to Baldor when they are available, in addition to pumpkins and gourds in fall.

This is not just a boon to our state’s agricultural economy: It also means we city eaters are now getting salads, squash or alliums that are thousands of miles fresher than before.

True, die-hard market devotees aren’t stocking their walk-ins with borage or Brandywines from Baldor, even those grown by Rick Bishop. Bill Telepan, a serious sustainable-agriculture supporter and a Baldor customer off and on since the start, admits he selects his super-specialty stuff from city stands or direct from small farmers. Yet even committed chefs like he still need enormous quantities of staples each week: cases of onions, crates of broccoli or Swiss chard, for example, not the kind of order you can tote home in a satchel from 14th Street, especially when your kitchen needs it delivered every workday.