Citymeals on Wheels Is Home (Bound) for the Holidays

They deliver, literally and figuratively. 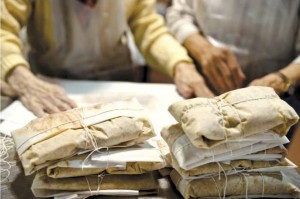 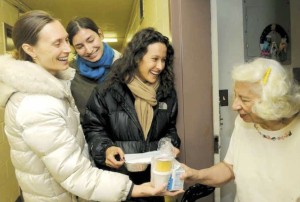 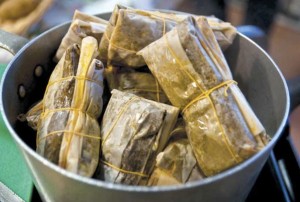 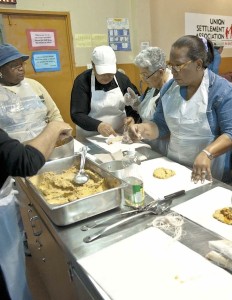 Fifty steaming pasteles are enough to bulge the lid off a giant stockpot. But that’s nothing to Victoria Rivera, who filled and wrapped every one of those Puerto Rican tamales by hand.

Every Christmas, she grates enough green plantains and stews enough pork to fill 12 to 14 stockpots with these tidily tied little packets. And that’s six 40-pound boxes of bananas and 120 pounds of pernil. In one day.

Rivera’s mission for the last 13 years has been to cook up a taste of tradition for over 300 elderly East Harlem residents who are home alone and dependent on Citymeals-on-Wheels for sustenance.  They each receive a Navidad dinner of roast pork, rice and pigeon peas, potato salad and green salad, plus rice pudding, but the pastel takes it to another emotional level.

For Puerto Rican, Dominican and other Latino immigrants, “the smell of pasteles cooking is the smell of the holidays,” says Maria Alejandro, director of senior services at the Union Settlement Association on First Avenue at 113th Street. The industrial kitchen at the center, where Rivera makes them, is also where Citymeals are cooked Monday through Saturday year-round for delivery seven days a week in the neighborhood.

Pasteles are just one example of culturally appropriate foods distributed by the not-for-profit, which turns 29 this Christmas and now feeds at least 16,000 New Yorkers every day of the year.  Chinatown residents, for instance, are provided bok choy stir-fry;

When she demonstrates how to make them in the seniors’ lunchroom one afternoon in early October, she is surrounded by elderly women not just from Puerto Rico and the Dominican Republic but also Argentina, Guatemala and Ecuador. In some of the Latinas’ home countries, the foundation of pasteles might be cornmeal rather than grated vegetables, and the filling might be shrimp, fish or chicken. But all the “students” get the rhythm quickly: Sluice a ladleful of oil over a sheet of oiled paper (substituting for out-of-season plantain leaves). Spread a ladleful of the plantain masa, made pliable with the addition of grated calabaza (squash), potatoes and that hairy root yautia. Top it with a dainty ladleful of diced pork simmered with achiote, onions, garlic, red and green peppers, sweet Mexican peppers, cilantro, coriander and fresh tomatoes. Then wrap, roll and tie with thin string. After an hour of steaming, the pasteles will be ready, firm enough to hold their shape but soft enough to eat with a spoon.

At Christmastime, dinners complete with pasteles will be walked to their recipients; as marketing director Beth A. Shapiro of Citymeals-on-Wheels noted, in Manhattan it’s “meals-on-heels” because parking is such a pain. (And six flights of stairs are not to be underestimated, especially with dinner in tow.) Luckily, the organization generally draws on extra volunteers moved by the holiday spirit and blessed with time off from work. (To lend a hand, visit citymeals.org/volunteer.)

The project was born back in 1981, when restaurant critic Gael Greene read in the New York Times about homebound elderly with zero food for the holidays. She called her friend James Beard, “thinking we could fill food baskets” for them, and the two of them wound up raising $35,000 by telephone from the food world in one weekend.

“On Monday we called the Department of Aging mentioned in the article and said we had $35,000 and some chickens to give, but ‘you can’t take one dime or quarter out for stamps or anything; it’s only for meals.’” That year, “6,000 people who would not have had a Christmas meal” were fed—which was 5,650 more than Greene and Beard had thought needed help.

Dollar donations have dropped in the last two years thanks to the bushwhacked economy and the Madoff rip-off, Greene says, but the organization still raised $19 million last year. She herself goes out once a year or so to deliver food, not least to feel less guilty about eating the lavish meals required by her job but also to see the need, and the range of recipients. Citymeals feeds “more than 100 who are over 100,” Greene says.

“Once you see the people you’re feeding and have a sense of the gratefulness, and the desperate austerity of their lives, and their isolation, you feel responsible,” she says. “It haunts you.” In addition to the once-a-day meal, accompanied by a snack for later, the elderly on the delivery list each get a box every fall containing 12 shelf-stable meals, Shapiro says, so they will have something to eat on days when the weather is too rough for volunteers to reach them and they’re back where they were before Citymeals.

But Maria Alejandro notes one other little lift for Christmas: Along with pasteles, her center sends out a little shot of a vital holiday taste: coquito, which is the Caribbean Latino equivalent of rum-spiked eggnog.