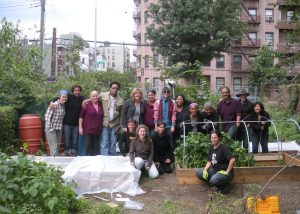 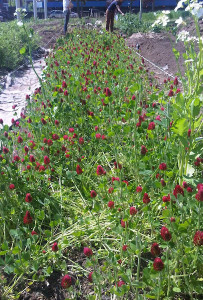 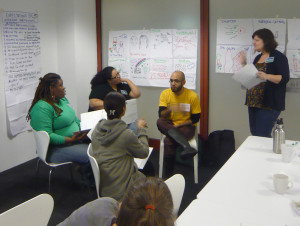 It used to be that urbanites who wanted to learn how to farm would have to save their pennies, put their city lives on hold and rusticate at sustainable-agriculture programs in Santa Cruz or East Lansing. Now New Yorkers can get back to the land without having to give up their livelihoods, or even their apartments, thanks to Farm School NYC, a comprehensive training program in urban agriculture offered through a homegrown network of urban farms and community gardens, and administered through pioneering nonprofit Just Food.

Farm School got its start in 2007, when a dozen New York nonprofits and community stakeholders came together to reflect on where the food movement they helped to spark was heading.

“We were asking ourselves, ‘How are we doing? Where are we going? What do we want?’” says Farm School director Jane Hodge, who was then Just Food’s “City Farms” market coordinator. “The idea of a ‘farm school’ just kept coming up, and we decided it was something we wanted to pursue.” The group obtained a planning microgrant, and the project soon had a life of its own—even after the money ran out.

“A bunch of people had a vision about where we needed to be,” says Hodge of that passionate but unpaid period. “We created it together.” Their big break came in August 2010, when their proposal won a three-year grant from the USDA Beginning Farmer and Rancher Development Program, proof that, from as far away as Washington DC, the most densely populated city in the United States was seen as fertile ground for farmer training. “It’s a big acknowledgment of how important urban agriculture has become within the larger farming movement,” says Hodge.

The result is a rigorous certificate program specifically designed for New Yorkers: Classes are offered on nights and weekends, everywhere from the Manhattan borough president’s office to BK Farmyard’s chicken run, and tuition is on a sliding scale (tuition for the two-year program ranges from $420 to $5,670 based on applicants’ income). Fifteen adults are accepted each year to work toward a Certificate in Urban Agriculture, and many more take individual classes to hone specific skill sets in things from planning beds to propagating seeds, and from backyard hens to rooftop bees. Students also complete hands-on apprenticeships all over the city, from the row crops at Snug Harbor Heritage Farm on Staten Island to the kitchen at Gramercy Tavern and the gardens at La Finca del Sur in the Bronx.

Best of all, the offerings are specifically geared toward urban ag. Existing programs outside the city offer solid farming foundations, but they pass over key issues that many city growers face. Tractor skills won’t get you far on a rooftop; cover crops won’t do much for lead contamination. And urban farmers have other unique considerations, like brown lots and zoning laws, not to mention neighbors living cheek-by-jowl with compost piles or chicken coops. Most importantly, traditional farmer training emphasizes yield and profitability, but sideline the issues of food access and food justice that come to fore in urban farms and gardens, where $200 farm-to-table tasting menus and $7 heirloom tomatoes share the same area code with chronic food insecurity and record rates of diet-related disease.

“Right now there’s so much structural dysfunction that creates barriers and divisions within the food scene,” says Maggie Cheney, Farm School NYC’s “Advanced Crop Production” instructor, and manager at Bushwick Campus Farms. “That’s why we’re not just teaching farming. It’s a powerful position to be a grower in your community, because you impact people’s bodies, people’s well-being. So I’m excited to share all the knowledge I can.”

This year’s graduating class—Farm School’s first—is already busy starting farms of their own and working with community partners to develop new projects. Squeezed out of garden space in her Lower East Side neighborhood, second-year student Tairena Gilbert is apprenticing with Boswyk Farms and building a new community farm from the ground up. Or rather, from the floor up: The Loisaida Hydroponics Studio, New York’s first indoor community farm, sprouted this spring, growing baby greens,
tomatoes and peppers, as well as flowers and herbs for a local
senior center.

“There’s this incredible invisible force where we don’t realize how much impact the whole [food] system has on our lives, not just individually, but as a society,” says Gilbert. “I didn’t really think about it until I went to Farm School. I wasn’t in that world. It was not obvious to me.”

Too often, she says, “it’s easy to feel daunted and overwhelmed. Most people just want to be able to feed their family. You’re just worried about what you can afford. But being able to grow your own, it’s like being given the keys to the kingdom. There’s freedom there.”

In some ways, Farm School marks the New York food movement’s coming of age. In a town better known for penthouses than farmhouses, a solid network of highly skilled urban growers is now training a new generation of farmers who reflect the city’s capacity and diversity.

Now if only you could rent a mini-tractor through Zipcar.