I envisioned stories on scallops and seltzer, irrigation and infusions. 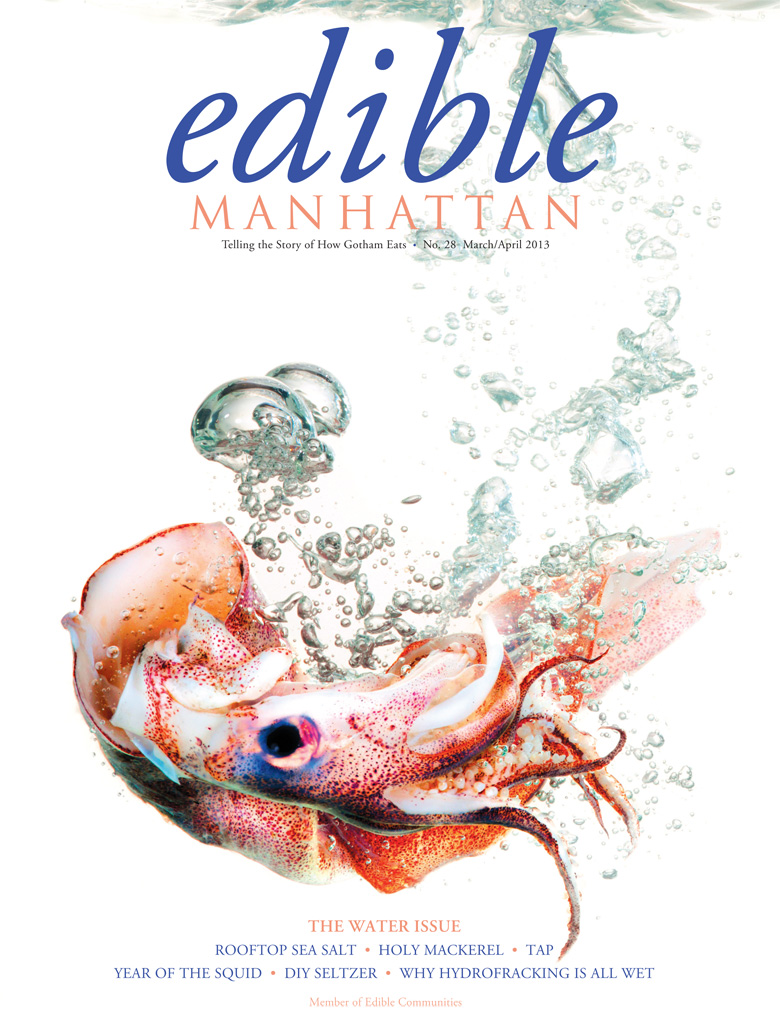 When I told our photo editor that I was working on a special water issue, her response was somewhere between skepticism and incredulity. Water? she repeated. A whole issue about … water?

We’ve done travel themes and alcohol editions, but last summer, when Judith LaBelle of the Glynwood Center suggested a special all-water issue of Edible, I was sold on the spot. We were toasting good water at Taste of the Marcellus, a fund-raiser for Chefs for the Marcellus and New Yorkers Against Fracking, two great groups fighting to keep hydro-fracking away from upstate farmland and out of our watershed. That night, as chefs served ingredients grown where Governor Cuomo may permit the risky drilling, these pages appeared before my eyes as if I were Moses receiving the Ten Commandments.

I envisioned stories on scallops and seltzer, irrigation and infusions. While Rebecca would later wonder how we’d fill our pages, my worry was the opposite—more stories than I could possibly fit between our covers.

Soon, I saw water, water, everywhere, and all of it made me think. I heard of a Randall’s Island rice paddy where Harlem high schoolers thresh alongside Momofuku chefs. Of a rainwater-harvesting initiative that helps urban gardeners capture rooftop runoff. Of ice-selling brothers whose great-grandfather hawked 100-pound blocks from a horse-drawn cart. Of artisans making sea salt on a midtown rooftop. Of Bloomberg’s efforts to promote tap. And of a new café in the East Village selling exactly one thing: water.

I also dove headlong into two big stories I’d been thinking about for years.

One is our cover girl: squid. We’ve all heard the catastrophic news about collapsing fish stocks worldwide, and I hope you agree that genetically engineered salmon is not the answer (though the FDA is likely approving frankenfish as you read this). So a few years ago, when I heard that squid is arguably the most resilient species in the sea, I made it a standard Greenmarket purchase and soon had only one question: Squid, where have you been all my life? The little, leggy creature is ecological, economical, healthful and delicious, and it cooks in three minutes flat. I’m not the only one who’s recently fallen for it: a generation ago, squid was nearly unknown in America. Today it’s everywhere from Le Bernardin to Hooters.

Another ingredient has been on my mind even longer: New York tap, and its rumored mystical powers. Decades ago my dad (a statistics professor incapable of exaggeration) told me that a Manhattan pizzaiola simply could not reproduce perfect crust outside the city because of one irreplaceable ingredient: our water. Is it true? We assigned a knowledge-thirsting science writer to find out.

But the most important topic in this issue is the one that inspired it: hydrofracking. Chef Peter Hoffman’s op-ed lays out its risks to our water supply and after editing it, I believe that fracking is not the answer to our nation’s energy needs, but that banning it is no better if we simply stick with coal. Instead we need a two-pronged solution: federal investment in renewable energy and serious citizen-level commitment to conservation.

So let’s drink to both—with a glass of the miracle that flows from our taps. May it do so for generations to come.

Squid, where have you been all my life?