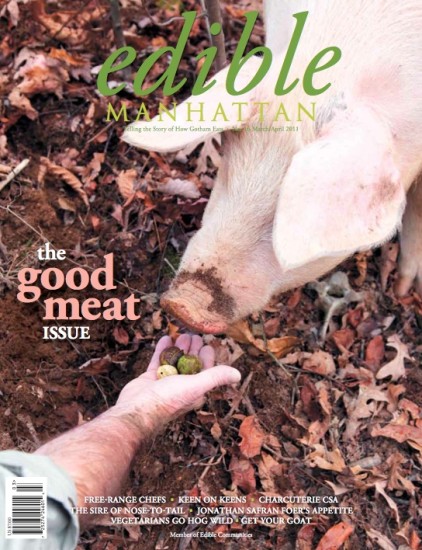 With apologies to Jonathan Safran Foer (whom I loved interviewing) Edible Manhattan’s first all-meat issue is dedicated to former vegetarians.

I’m not being flip, and I didn’t mean to say “lapsed.” Editing this issue upheld my impression that just about everyone involved in good meat today was supping on tofu a decade ago. It seems I’m one of many herbivores to convert to conscientious omnivorousness.

For most of my teens and 20s, I was a vegetarian myself, as was everyone I knew who cared about ecology. To eat with the Earth in mind was to eat plants, and to know anything about factory farming was to lose all appetite for meat, not to mention dairy and eggs.

But today I’m a meat eater married to a livestock farmer. It’s not because I became careless (see: “I didn’t mean ‘lapsed’”). I still regard factory farming as an abomination. But I’ve learned that CAFOs and feedlots aren’t the only way to make meat, that it’s possible to raise animals not in caged torture but on green grass, under blue sky. Several of the passionate protein professionals in this issue traveled similar paths. After years avoiding steak knives in the name of ethics, they’ve picked up pitchforks and cleavers—with the same intention.

Take Heather Sandford. She and her partner raise 200 pastured pigs a year, butcher the animals themselves, then make everything from pâté to scrapple, all to the delight of their Manhattan CSA shareholders. Once you read about the way they raise their animals—and ponder the photo of their gorgeous goldenrod-kissed fields—you might agree that Heather now does more for animals than she did when she lived on grilled-cheese-and-tofu sandwiches (which she recalls with regret were made with commercial cheese and conventional soybeans).

Or consider Josh Applestone. He and his wife launched Fleisher’s Grassfed and Organic Meats, one of the first butchers in the country to only offer meats raised right on small local farms. But the shop’s strict standards were only one way Josh did right by animals; the other was his veganism. Today Josh eats meat—he certainly knows how it lived and died—but it feels right to me that the man largely credited with launching the butchery renaissance began the role as an herbivore.

Nicolette Hahn Niman’s story follows a similar trajectory. Ten years ago she wasn’t just an Upper East Side vegetarian. She was an environmental lawyer running Riverkeeper’s national fight against factory farms. Like me, she’s now married to a livestock farmer and (unlike me) she spends her days moving cattle on horseback, on a thousandacre ranch overlooking the Pacific. But that’s not the surprise ending to her story. This is:

She’s a cattle rancher, but she’s still a vegetarian.