Thanks to a collaboration with Blue Hill and Stone Barns, ICC culinary students have a field day. 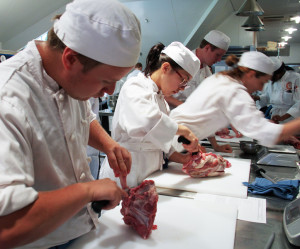 Boning up on their knowledge. In culinary school, butchery 101 is standard. but starting with a live animal is rarer than the rosiest plate of lamb. 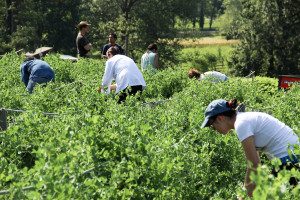 Connect the dots. Morning farm sessions—picking lettuce, harvesting honey, and moving sheep, geese, chickens and turkeys to fresh pasture—were followed by afternoons in the kitchen—cooking grains, breaking down a lamb, and making merguez and blood sausage from it. 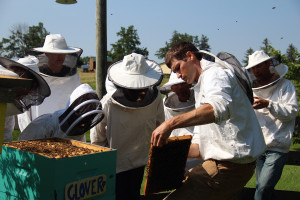 Like bees to honey. The program is grounded in the belief that “great food begins in fields and pastures, the sea and the vineyard.” 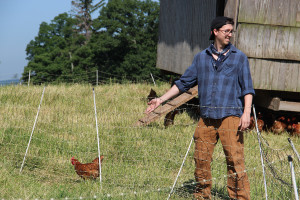 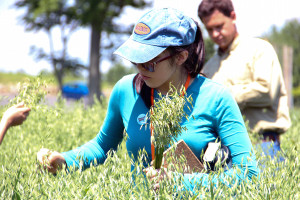 The most challenging thing I had do back when I was in restaurant school was glove-bone a chicken. Now, some wannabe Escoffiers have to slaughter a chicken—and then eviscerate it, too.

I watched them do both at the Stone Barns Center for Food & Agriculture, 25 miles up the Hudson River, on a sunny morning in July. A dozen fresh graduates of the International Culinary Center were finishing up the last week of a new elective course of study called “farm-to-table” that had them gently slitting the birds’ throats humanely and groping inside the freshly killed fowl to tidily tug out the offal. And unlike my wisecracking class back in the last century, these aspiring chefs were doing both with great solemnity and respect.

It wasn’t exactly a summer vacation, but aside from the blood and guts, they looked to be spending an enviable five days.

Eighty-acre Stone Barns Center is an agrarian Eden: Flocks of sheep graze in green pastures, hogs snooze blissfully in the shade, picturesque produce grows in fields and a greenhouse, bees buzz around hives. And it is home to the renowned country outpost of Blue Hill, the trailblazing restaurant chef Dan Barber opened in Greenwich Village in 2000. The reality of learning in the fields and cooking in its kitchens had the students wide-eyed.

Each morning they came up from the city to participate in the Farm-Powered Kitchen, which teaches cooks how ingredients are shaped by agriculture: from breeding and diet to environment. Morning farm sessions—picking lettuce, harvesting honey, rotating the sheep, geese, chickens, turkeys and pigs to fresh pasture—were followed by afternoon kitchen sessions—cooking grains, breaking down a lamb, making merguez and blood sausage from it.

In between, they changed into whites and sat down for lunch while listening to a discussion of sustainable food and agriculture, moderated by Barber (who himself graduated from ICC, back when it was still known as the French Culinary Institute). On the day I joined them, renowned breeder Ridge Shinn spoke intensely on the challenges and environmental/health rewards of producing grassfed beef in a grain-fed world. (For starters: It’s not a matter of simply switching fodder; only certain breeds thrive on what comes naturally. Not for nothing does grassfed beef make up only about 1 percent of the American market.)

ICC’s new program is an acknowledgment of how American cooking education has evolved away from rote technique. As the SoHo-based school’s website puts it, “Great food begins in fields and pastures, the sea and the vineyard.”

Chefs today need to know not just how to cook but how and why to source. Over the previous six months the students had received the school’s usual 600 hours of training, but that was supplemented with field trips to farms and wineries and cheesemakers to experience how food is grown and produced. (Tuition is $51,250, compared with $48,000 for the traditional course.)

Nyamka (Nye) Z. Clark, 27, from Newark, said she took the farm-to-table elective because the timing in her life was right, not because she was drawn to the concept. But then: “I completely fell in love with Dan Barber and his vision.

“We were taught things like rotational cropping; soil health; growing in a greenhouse; flavor, herb and flower combinations; making crops the star of the plate and switching your brain and accepting that your protein can instead serve as a side dish to your vegetables; the importance, not to mention variety, of grains and how they can be a partial substitute for flour in a lot of dishes to create a different mouthfeel and experience. Being on the farm was easily the best week of my life.”

The positive feelings were mutual. “I was astonished by the students’ dedication,” wrote Barber in an e-mail. “Their willingness to commit to the full experience with the farmers, chefs, breeders and educators allowed them to conceive not merely farm to table but a fully realized cuisine that balances innovation, ecology, flavor and community.”

That was proved on the last day of Farm-Powered Kitchen, when the students were required to actually cook a dish and explain the agricultural relationship to their creation. They would be working in Blue Hill’s kitchens at the busiest time of the week but were reassured: “It’s your kitchen.” And their faces seemed to reflect awe and anxiety as they were reminded: “Dan’s gonna eat your food.” No pressure there.

But after a morning of chicken slaughter, they seemed surprisingly serene. Ben Duignan, 22, from the Lower East Side, observed: “Breaking down is a really nice experience, more than the slaughter. It’s more zen. But killing it was pretty easy.”

Similarly, Dan Trimble, 25, from Brooklyn, said he found the close encounters with the chickens the most moving experience of the week at Stone Barns. In an e-mail, he elaborated: “I am of the belief that if you are willing to eat a chicken (or any animal), you should be able to confront the entire cycle of raising and processing them. My classmates and I had broken down countless birds at school, and I had obviously seen plenty of live chickens on farms before, but this experience filled in the meaningful gaps between a living, breathing animal and ‘Poulet Rôti Grand-Mère,’” a staple of the ICC curriculum.

Clark noted that she once bungled killing a lobster in an ICC class and started her Stone Barns morning thinking she couldn’t possibly slaughter a chicken. But she “plucked up her nerve” and wound up dispatching three, more than any of her classmates. “There’s a real disconnect when all you do is portion a chicken carcass from the supermarket and it becomes just another thing to do. It’s a completely different story when you take that knife and slit the chicken’s throat like some bad guy in a movie.”