A Locavore in Barbados

Where some vacationers see surf and sand, this sustainable food expert finds local okra,
grassfed lamb and the rumblings of an agricultural transformation. 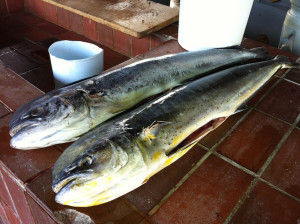 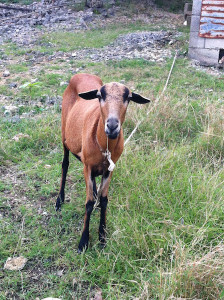 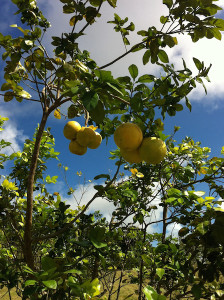 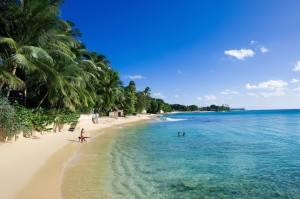 My first visit to Barbados was in 1995, an escape from a harsh NYC winter to see my friend Sarah, who had recently moved there with her husband. We had worked together as caterers in the late 1980s, cooking in gritty East Village kitchens.

That trip was also my first vacation with then-new boyfriend Dick, a Dutchman who likes neither sand nor sea but enjoys good food and was up for an adventure. At Sarah’s, meals were made with ingredients gathered from the market stalls of Speightstown, a historic port village on the west coast, and small farms along the rural roads leading to their St. Lucy Parish house. We ate local chicken, okra, tomatoes, cucumbers and copious amounts of the island’s iconic flying fish, with rice and beans, washed down with Banks beer and rum (of course). The food was simple and preparations basic, providing fulfillment but, to be honest, not much adventure.

Nevertheless a great deal of romance was cooked up on that first trip, and Dick and I have returned to Barbados nine times in the 16 years since. Besides each other, we’ve fallen in love with the island’s east coast, which catches the African trade winds, making it temperate yet rendering its waters unfit for all but the most experienced surfers.

The east coast draws adventurers rather than tourists, and we take up residence at the Sea U guesthouse, which has several rooms with kitchens. And on the east coast of Barbados, to cook is to think. There are, literally, no supermarkets or produce markets on this side of the island. We have discovered three small fish markets, but the common wisdom accumulated is: “When fish have been caught.”

And we don’t always have a car, so cooking also requires coordinating with the reliable bus service (remember, Barbados was British!) to towns on the Caribbean side where shops (and tourists) are plentiful.

Barbados is in what I’d describe as an early-stage agriculture transformation. A tariff expiration has the country shifting away from commodity exports (sugar, or the value-added version, rum) toward growing diverse foods for local eaters, not global buyers.

I appreciate the wide range of products, processes and marketplaces they’re experimenting with, and the sense that locavorism is grounded in self-reliance and entrepreneurship—not elitist idealism. There is something for everyone. At an agriculture experiment station in St. Andrews Parish, trials of tropical fruits include papaya, mango, starfruit and … grapes. (I’m not so sure about the grapes, but give them kudos for trying.) There’s local livestock, too: Blackbelly sheep, the island’s other iconic protein, are raised on grass by small holders. The deliciously lean meat is increasingly available in supermarkets.

Back in St. Lucy, I spoke with a farmer cultivating five acres (and five more if she can get them) through a land-lease program. She says hotel restaurants are interested in her products, and chefs are coming out to the farm to see what’s growing (peas, okra, cucumbers, tomatoes and melons).

Occasionally Sarah and I venture to a corner of a parish less traveled, where we might enjoy souse (pig bits pickled with cucumber and lime), pudding (grated sweet potato) or ceviche (pickled octopus).

Perhaps my favorite recent encounter has as much to do with the venue as the degustation. One rainy Saturday afternoon last January I took shelter at a community center that houses the St. Phillip’s Parish cricket club, where townspeople were preparing for the next day’s game. I was soon invited to join them for some food and drink while waiting for the storm to pass.

Over the next hour we covered an array of topics ranging from the Republican primaries, then in full swing (“What is happening over there, man?”) to my observations that more and more acreage was under cultivation. My new friend Mawbry confirmed, and explained: “We need to feed our-selves.”

That simplicity, experienced through a chance encounter, underscores much of what I enjoy about Barbados. Straightforward thinking, talking and eating, and a sense of discovery, all overlapping with familiarity and ease, over a plastic cup of rum and a plate of barbecue chicken, cornmeal and okra.

Culinarily post-colonial. Island agriculture is shifting away from commodity sugar for global buyers and toward a self-sufficient system for its own citizens.

Barbados is the eastern-most island in the vast chain that arcs like a crab claw from South America’s shoulder to the tip of Florida. Its nearest neighbors, St. Lucia and St. Vincent, are both volcanic, but Barbados is coral pushed up from the sea.

Culinarily, Barbados rocks like a boat between the piers of traditional dishes and foreign fare. Beyond the beaches, island folkways simmer in a multicultural stew of influences from African and English ancestors. Meals are served from weekday food vans, weekend fish fries, ethnic eateries and temples of haute cuisine.

Agriculture-minded adventurers will find vegetable fields and greenhouses, coconut and banana groves and, of course, sugar cane. On Saturdays, hit Bridgetown’s big Cheapside Market, a sociable source of seasonal veg—from starchy breadfruit to vine-style spinach. The odd-looking root crops alone are worth the visit: dark, gnarly yams (true ones, not smooth North American imposters), spindly cassava, bulbous eddo and ring-skinned dasheen. Some ladies sell dried bunches of “bush” for medicinal teas, and the organic guys have begun bottling vervain—a weed that cures what ails you. Check the big St. Lucian stall for shark oil, hard tubes of unrefined chocolate and bois-bande, an aphrodisiac. Spectacular fresh juices including soursop, carambola and golden apple (a kind of plum) are all outstanding. Also on offer: maubey, made from a bitter bark, and coconut water fresh from the big green nut’s heart.

Much sourcing is straight from the sea. For authentic meals out, experience an evening fish fry at Oistins. Or, on Thursdays from afternoon into nightfall, the plebeian rum shop at Martin’s Bay, in the parish of St. John, becomes a seafood scene. Lunches at Lemon Arbour, also in St. John, feature pudding and souse; their pickled sea cat (octopus) is sensational. Warning: Saturdays are loud.

Before flying home, fill your suitcase with black cake, smooth and heavy with rum-infused fruit, and stop by a supermarket to pick up blister packs of Bajan seasoning, a coarse puree of onions, garlic, hot peppers, thyme and marjoram, acidified with a splash of vinegar. Back home, slather fish, chicken or pork. Try not to drool.