Mark Van Glad is growing barley and hops to pave the way for a truly New York beer. 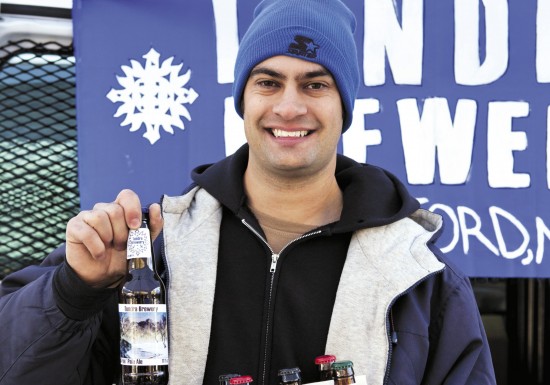 For locavore lushes, a truly New York beer has long been the holy grail, thanks to a lack of local farmers growing barley and hops. But for Mark Van Glad, founder of the year-old Tundra Brewery up in the Catskills, that wasn’t a problem: He could just grow his own.

Van Glad, 27, comes from a family of farmers in Stamford, New York—you’ve maybe even watched him grow up behind the Wood Homestead stand at Union Square Greenmarket, where he’s helped his father and uncle sell maple syrup for more than two decades. So when Van Glad—who started making beer in college with a friend—heard about a 2009 law that would let small New York State breweries sell suds at state farmers markets, he immediately realized he could brew for real.

Growing grain was already in the family: In addition to tapping maple trees, a few years ago his dad started cultivating sorghum, a grain that can be boiled down like sap to produce a molasses-like sweetener that’s popular down South. So in 2010, Van Glad added 12 acres of barley to the family fields—after harvest, it goes to a specialty malting house in Massachusetts—and started tending a 5- by 20-foot patch of hops called Brewer’s Gold and Cascade.

By spring of last year he’d founded Tundra Brewery and was selling MaPale Ale (made with Wood Homestead syrup) on Saturdays at Union Square, becoming the first and only stall to sell beer. (Greenmarket rules are even stricter than the state’s, requiring brewers to not just brew locally, but use local ingredients, too. Van Glad currently grows all his own grain, but sometimes adds a few hops from California.)

He’s since added a brown ale, an IPA and a red ale, which pours bright red thanks to the addition of summer flower honey from his family’s hives. He’s also planted 14 acres of grain sorghum—a slightly different varietal than the one used to make syrup—with plans to produce a gluten-free beer. (Named after the brutal winters in the northern tip of the state where Van Glad went to college, Tundra’s logo and labels are also local: They’re designed by his girlfriend, Donna Wessel.)

While Van Glad expects New York’s brand-new Farm Brewery License to increase his competition, for now he gets to work on his local brewing chops in an extremely uncrowded field. Which is handy considering that in many ways he’s still essentially a homebrewer, making 155-gallon batches every few weeks in converted stainless steel tanks he bought from an old dairy operation. Those actually share the same barn his father and uncle use as their maple sugaring shack.

During the annual syrup season—which is right about now—Van Glad admits you can probably expect a dip in Tundra production. “I’ll be too busy,” he says, “collecting sap.”

Find Tundra Brewery at Union Square and Inwood Greenmarkets on Saturdays, as well at Jimmy’s 43, The Pony Bar and SmorgasChef. Bottles are two for $5; six-packs are $13.