Where to Eat at The Deco Food + Drink 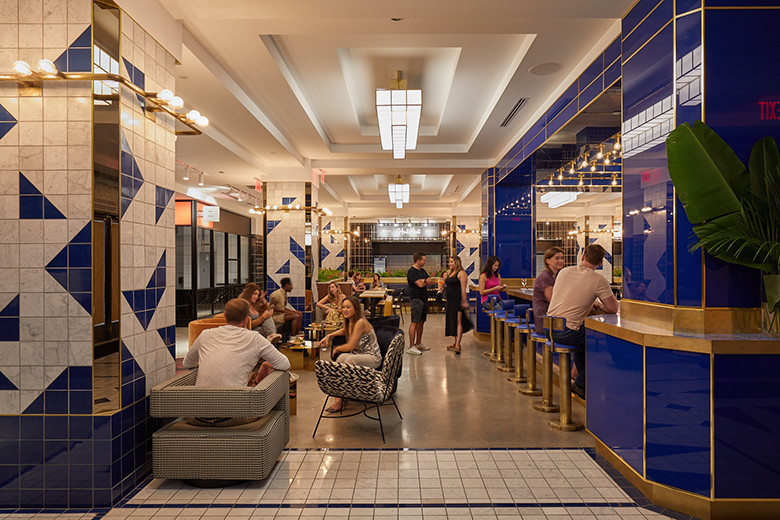 Just blocks from Bryant Park, the brand new food hall and cocktail bar offers office workers and shoppers a cozy respite from the bustle of Midtown.

Manhattan’s newest food hall, the Deco Food + Drink, is now open with a lineup of vendors that will make you want to brave the Midtown crowds.

Just blocks from Bryant Park, the brand new food hall and cocktail bar offers office workers and shoppers a cozy respite from the bustle of Midtown. Located at 231 West 39th Street, the Deco Food + Drink features nine local vendors dishing up everything from French baked goods to Afghan comfort food and more, alongside a cocktail bar. To start, the food hall will be open for breakfast and lunch six days a week: Monday through Friday 7 a.m. to 3 p.m., and Saturdays 8 a.m. to 3 p.m.

Here’s the scoop on what to eat at the Deco Food + Drink.

Mademoiselle by Maman
Dreamy, French inspired café, Maman is one of my go-tos for meeting a friend for coffee and a triple chocolate cookie in SoHo. Now, the Maman team is bring Mademoiselle by Maman to The Deco, a new concept that serves the high quality, delicious coffee, baked goods, tartines and sweet treats Maman regulars love, created from recipes passed down by French “mamans.”

TACO BOUT more bang for your buck! Come hang at @parklifebk for #tacotuesday and score your choice of 3 tacos for $10! Plus @trivianyc at 7PM! 🌮🧠

Antojitos El Atoradero
As a child, Hermes Rosas fell in love with food, while helping his mother cook street-style tacos and tamales, that she sold at a bodega in the South Bronx. Today, he serves up tacos made with handmade tortillas alongside other Mexican recipes passed down from his mother, grandmother and aunt at Antojitos El Atoradero. Known for its homestyle approach to Mexican cooking, Brooklyn-based Antojitos El Atoradero makes its Manhattan debut at The Deco Food + Drink.

Huli Huli
Take a trip to the Hawaiian Islands—er, Midtown. Specializing in Hawaiian cuisine like rotisserie chicken, and Spam fried rice, Huli Huli will have you feeling tropical even when the weather outside is frightful.

Little Tong Noodle Shop
It was impossible not to fall in love with Simone Tong’s springy mixian soups, stir-fries and bowls when she opened the cozy Little Tong Noodle Shop in the East Village back in 2017. Now, Tong is bringing Chinese breakfast staples to Midtown at The Deco. We see a lot of early meetings in our future.

In the Rockaways having a snack. Order: Coxinha chicken and Pasteis (Romeo and Juliet) with a guava drink. Great local spot. #rockawaybeach #brasilianfood #delicious #yummy #wantsomemore

Beach Bistro 96
If you’re a fan of Rockaway Beach chances are you’ve seen Beach Bistro 96, maybe you’ve even ventured inside the sea shack inspired eatery and tried the Brazilian fare. Now, you’ll be able to get that beach feeling in Midtown with dishes of Pasteis, Pão de Queijo and more.

Mani in Pasta
Make it a pizza afternoon with Mani in Pasta’s traditional Roman style pizza. They’re creating an exclusive “Pizza Deco” just for the location.

We wanted to share this amazing dish with you. It's #paleofriendly and very versatile, you can switch the parmesan for goat cheese or no cheese, add avocado; this is with broccoli rabe, but traditionaly made with tomatoes 🍅🍅🐣 #Repost @nytfood ・・・ Green #shakshuka. You can find the #NYTCooking recipe through our profile link. (📸: @rikkisnyder) #🍳 #🐔 #papapoulenyc #friday #breakfast #brunch

Nansense
Run don’t walk to Nansense. Mohibullah Rahmati started Nansense as a food truck serving Afghan comfort food on a Chelsea street corner back in 2018. In a little over a year,  his dishes like mantu (beef dumplings) and chicken forma have become favorites with the the Smorgasburg crowd and earned Rahmati “best rookie vendor” from the venerable Vendy Awards. At The Deco, Nansense opens as the first rotating kiosk pop-up.

Read More: At Smorgasburg, These Afghan Dumplings Are Worth the Wait