Eating with Clio: Quality not Quantity (or the Lesson of Herring Roe) 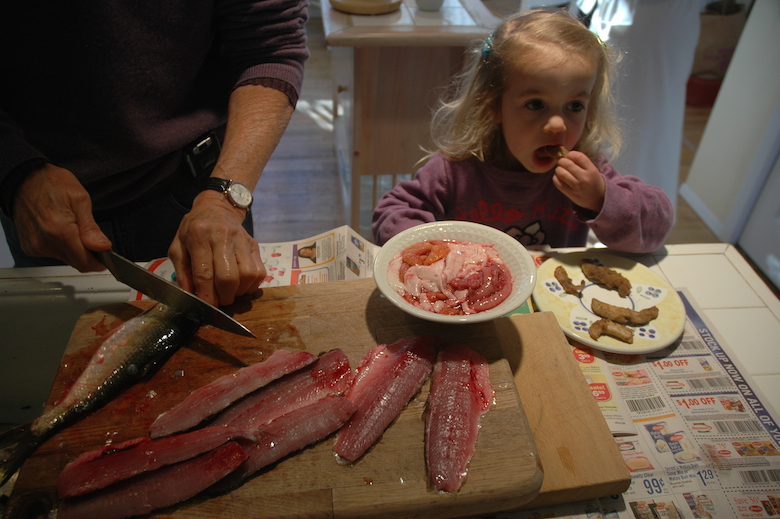 It was during Sunday morning breakfast when Clio munched through—not unlike the Hungry Caterpiller—an entire plate of pan-fried alewife roe that I suspected my wife and I fret too much about her eating. Yes, according to the old medical scale in my parents basement, Clio hasn’t gained a pound in the last few months, although she has grown nearly 3 inches. But even if she doesn’t always impress with the quantity she eats, she never fails to amaze with her appetite for new flavors, like the salty, proteiny eggs from the spring run of Peconic Bay herring. Weight gain is one measure of a good eater, but so is willingness to try and eat a diversity of foods, right?

Recently, at her pre-school, Clio was the only kid in the room to try all three French cheeses (part of a lesson about France). And the other night at an adult dinner party, Clio insisted on trying a small piece of all seven cheeses on the table, including a couple of stinky, weepy blues that most of the adults in the room shied from. “Oh. That’s really good,” Clio declared. “That’s really, really good.” At a chaotic kids meal at the eco-healthy pizza joint Foody’s in Water Mill, Clio was the only kid to return to the table for seconds. And over a homecooked dinner prepared by Almond chef Jason Weiner, Clio out-ate her counterparts in the category of tortellinis and Weiner’s Brussels sprouts Caesar.

But we (the parents of a pipsqueek) still obsess. Often times, facing a plate of pasta, duck confit and broccoli, Clio might gobble all the duck (gnawing the bone clean), but not touch the pasta and veggies—until we hand feed it to her. And sometimes during breakfast Clio’s so excited to start her day–bouncing like a Mexican jumping bean–that she’ll only nibble her oatmeal or eggs or peanut butter and jelly, before running for her puzzles or stuffed animals or books, leaving us to despair that she’s burning an order of magnitude more calories than she is consuming.

Perhaps we need to be firmer with her, sit her down for meals and not let her get up until her plate is clean. But that thinking might be antiquated, and not really helpful over the longterm. In her book, The Family Dinner, on the virtues (and logistics) of eating together, Laurie David includes Ten Simple Steps to a successful family dinner, including one that makes me feel very good about eating with Clio.

“STEP FIVE: Everyone Tries Everything,” David writes. “This is very different from the old adage “Eat everything on your plate.” David suggests that “the rigid insistence in the old days on eating all of your vegetables” has created “stealth veggie Houdinis,” kids who do whatever they can to not eat certain things.  In contrast, the requirement to try everything shows respect for the cook, gives our taste buds “an opportunity to be pleasantly surprised.”

David offers other solid advice, relevant to both toddlers and teenagers, including turning off the TV and phones (no brainer), setting a consistent meal time (important, but easier said than done), and getting kids involved in the cooking process. This last suggestion is perhaps the most powerful. Studies from a variety of universities, including a study of 3rd and 4th graders by Texas A&M, a study of 4th graders at UC Davis, and a study of youth gardening in Detroit, have shown that kids exposed to gardening and cooking, even a few times, are much more open to eat vegetables and fruit they have seen and touched in the garden, demonstrate increased knowledge about nutrition, and an enthusiasm for neighborhood beautification in general.

So, despite all our handwringing over allergies and low-weight and erratic eating, maybe we’re doing something right after all. We did expose her to plenty of gardening and cooking in her first few years. And in the case of the spring herring, we couldn’t peel Clio away from the bucket of fish grandpa brought home from his dawn run to the alewife stream. She watched him gut, fillet and cook the fish, including the row and milt sacs that fry up very nicely in a little oil with just a dusting of flour. (The row and milt membranes protect their contents, sort of like a sausage casing.)

Perhaps in terms of preparing her for a life of satisfying and nutritious and interesting food experiences, Clio is emerging as best sort of eater there is.