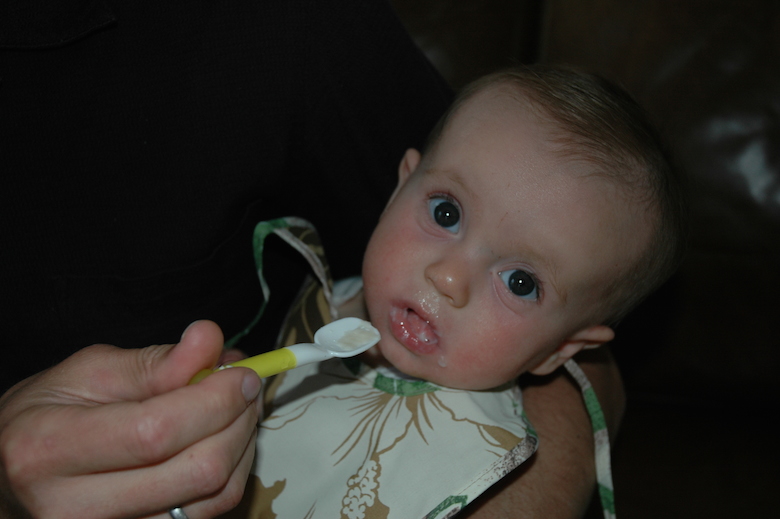 The first time I gave my daughter Clio honey water, she was just 4 months old, even though pediatricians–and even beekeepers–generally warn against feeding children honey before one year of age. But she was suffering through a late winter cold that left her coughing and congested. And in a parental fit of attempted soothing, I took a small spoonful of honey, stirred it into a cup of just boiled water, diluted that with cold water until it was just a touch hotter than warm, and poured it into her bottle. After a couple of testing tastes, she guzzled the honey water in one long drink. What would Dr. Spock say?

“You know more than you think you do,” is actually how Dr. Spock opens his parent-helping classic, Baby and Child Care, first published in 1948. He was known for being supportive and confidence-building (as well as controversially recommending vegetarian diets for children later in his career). He must have believed that instinct guides parents, or that kids are resilient enough to receive whatever well-intentioned rearing parents give them, even when parents make it up as they go along.

Clio’s mood and condition improved instantly. Her throat seemed to clear after the long, soothing gulp. And I gave her a couple more refills throughout the day when she seemed to be most pained. Honey water became a daily ritual almost immediately, even after her cold went away.

Three years later, when my daughter wakes up in the morning, she sits up in her bed, brushes the hair out of her eyes and asks, “Is it time for honey water yet?” We head downstairs to the kitchen and, as the water boils for the coffee press, I prepare her honey water. She retreats to the couch or a kitchen chair, nursing the honey water not unlike how my wife savors her first cup of coffee. (And like a coffee drinker, Clio is particular about how her cup is made. She balks at using hot water from the tap, and will complain that “I can’t taste the honey,” when the mix is too diluted.)

Not surprisingly, on family shopping trips, Clio is quick to note that “we need honey.” She flocked to the Berkshire Berrie’s jars on a recent visit to the Union Square Greenmarket. And at the Sag Harbor Farmers Market, she has long enjoyed taking varietal honey samples on her finger from beekeeper Mary Woltz, whose Bees Needs honey is our family brand.

(It turns out the warning against feeding infants honey, summarized here by one beekeeper, is precautionary, but not completely rational. Honey, as well as maple syrup, ham, canned foods and soil, can harbor the bacteria that causes the very rare infant botulism. But there’s little evidence that kids who eat or drink honey are any more at risk of getting it. In fact, honey was not implicated in two recent cases of the illness in Philly.)

Honey water wasn’t the only liquid concoction that we worked into Clio’s diet. If you’ll recall, we’ve been concerned about her small size ever since a pediatrician first made us concerned about it. And before we learned that she had some food allergies, we fed her all sorts of high-fat and high-calorie foods, many in drinkable form. These different things we put in her bottle included:

– Warm lemon water. Not too popular even when sweetened.

– Diluted salt water. Not too popular, but effective in reducing congestion and easing the symptoms of a runny nose and cough. We also used a bulb syringe on occasion to squirt a bit of salt water into her nostrils, which also helps with colds. Make with sea salt, but commercial salt could be used in a pinch.

– Yogurt lassies. Very popular, until we learned Clio had a dairy allergy. We made them with equal parts yogurt and milk. We also used soy or nut milks. Any flavor of yogurt will do, although yogurt with fruit may cause the nipple bottle to clog. (A cooked egg yolk can also be mashed into this.)

– Miso soup. For a little while, very popular, but now not so popular.

– Pork broth or other bone broth. Very popular, especially when slightly sweetened. The winter Clio was born we had acquired a share in a hog and were going through lots of pork bones and making lots of stock. The basic recipe included sauteeing some leeks and then adding the bones and any  other seasonings before simmering. But please note: A bottle of pork broth in your child’s hand will attract dogs to lick the bottle, and to vigorously lick your child’s hands and face. Like I said, what would Dr. Spock say?