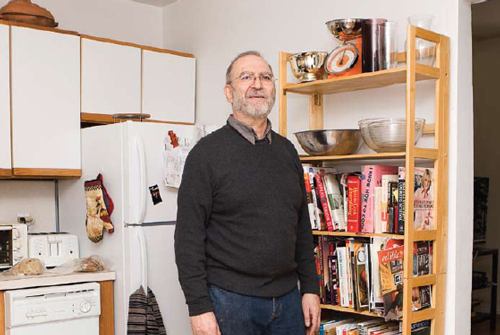 Lenny Lo: Okay, we’re not suppose to call him Lenny, but we love him so much we couldn’t resist.

Those of you who read Edible Brooklyn too might have already seen the piece we did peeking into Leonard Lopate’s brownstone kitchen.

We knew the WNYC radio host was a dedicated home cook and an even more dedicated oenophile, and his fridge (and his wine caves) did in fact deliver: There were tubs of homemade stock, an amazing cookbook collection, warm cookies, frozen chanterelles plucked by Leonard himself in the forests north of the city, more than two dozen wine bottle openers and a very very well-seasoned cast iron skillet that any southerner would be proud to own. (And Leonard, by the way, is a native Brooklynite.)

But one thing we neglected to mention was the role that the mellifluously voiced man has played in elevating the discourse on food in this city for two and a half decades. We were reminded of that fact at his own roast just last week, when celebs like Andy Borowitz, Chuck Close (“if anyone could make me a mixed tape that I would listen to for the rest of my life it would be Leonard Lopate”), Rosie Perez and Martha Plimpton poked fun at his career.

But it was chef (and long-time friend and fellow Brooklynite) Michael Lomonaco of Porter House New York that made the biggest impression on us. He’s been on Leonard’s show countless times (and even shot a little video making one of Leonard’s favorite foods–pancakes–with that very skillet) and made the point that Leonard’s intellectual interest and passion in food meant that guests like Ruth Riechl or Mark Bittman were always asked to speak about food in cultural or philosophical contexts long before, um, publications like Edible Manhattan thought to do the same thing.

“Who else does 34 minutes on bee-keeping?” asked Lomonaco: “There is no-one else who has done as much to promote the dialogue for food like Leonard Lopate. I don’t think there is another forum out there where the dialogue of food delves into art and science or architecture like The Leonard Lopate Show.”

Well, we’d like to argue that we do too, but we’re pretty darn thankful to Leonard for giving us a fantastic model to follow for the past 25 years. And for letting us into his kitchen, to boot.