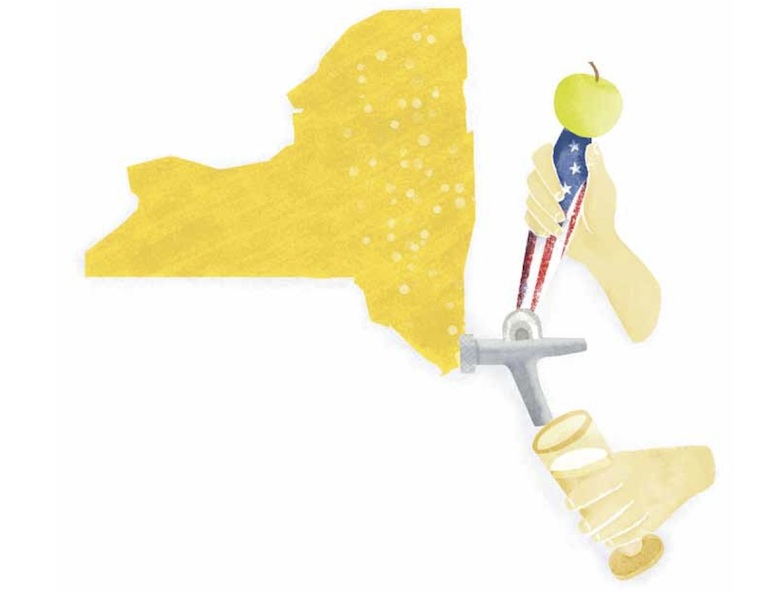 Much fuss was made in 2005 when a Gallup poll found that wine had overtaken beer as America’s alcohol of choice. Slate called the news “an astonishing development, akin to Americans jilting baseball for bocce,” but drinkers with a thirst for history know that America wasn’t raised on fermented grain or grapes: our nation was founded on hard cider.

In the pre-refrigeration days of the 18th and 19th centuries, all cider was fermented, and early Americans — including children — drank hard cider thirstily. Thanks to a certain legendary Johnny who sowed apple seeds across the frontier, every homestead featured an orchard. But when one plants apple seeds, as Johnny did (rather than grafting cuttings), the resultant tree typically yields inedible apples: bitter, tart, tannic and astringent. Terrible for eating; perfect for hard cider.

Cider and rural life were inextricably linked. In 1726, a Massachusetts village of 40 families put up 10,000 barrels. Where currency was rare, cider was bartered for the services of a minister, a doctor, a teacher. The cider barrel became a quintessential symbol of American values — by serving cider to voters, William Harrison handily won the presidency in 1840.

But as the sun set on the 19th century, Americans moved to cities and left cidermaking behind. Beer’s popularity rose, in part due to German immigration, and also because beer could be brewed more easily and cheaply in cities. By the dawn of the 20th century, cider production was in serious decline; Prohibition delivered the final blow.

Orchards were razed in the name of sobriety, and apples were recast as a fruit for healthy eating. Today America is home to only a quarter of the 20 million apple trees we grew in 1900, and our apple diversity has been pared back to just a few varieties. Most of the apples we consume are drunk as juice reconstituted from concentrate, 82 percent of it imported, mostly from China.

Mention alcohol made from apples today and most New Yorkers will think you mean one of two things: either cloyingly sweet, mass-produced hard cider that’s sold by the six-pack; or rarefied apple brandy from France that will set you back several Hamiltons.  Although New York’s storied orchards remain a core of the upstate economy, with apple yields second only to Washington State’s, local apple alcohol — meaning hard cider, or brandy distilled from it — can be as hard to find as hand-churned butter. It’s time for a revolution.

Regional cideries in New Hampshire, Massachusetts, Virginia and New York, though small, are poised to revive our ancestral alcohol by creating ciders replete with place-based taste. As they do so, some are reviving endangered apples by using heirloom varieties from America’s cidermaking heritage. And the Hudson Valley, with the state’s legendary “apple belt,” could be in a leading role.

Apple alcohol isn’t just a way to taste the past — it also offers orchards a path to a healthy economic future. Distillation transforms fruit into spirits (hard cider becomes apple brandy, or “applejack” if by freeze distillation) — valuable products that could mean new revenues for the ailing apple industry. Recent changes in state license laws facilitated the establishment of three new craft distilleries in the Hudson Valley — Warwick Winery, Harvest Spirits and Tuthilltown Spirits — and their shiny copper stills can spin apples into liquid gold. For Derek Grout, a third-generation farmer who founded Harvest Spirits to save his family’s orchard, the logic is as clear as his award-winning apple vodka: “Spirits are special, because when you distill fruit and put it in a barrel, you increase its value over time. You can’t do that with any other method of processing.”

We tend to think good apple spirits only come from France, as eau de vie or aged Calvados, named for its region of origin. But this new crop of Empire State distillers envisions a day when the Hudson Valley is celebrated for its own distinctive apple brandies.

With that in mind, a cross-cultural exchange is in the works for later this year, intended to introduce Hudson Valley orchardists, cider makers and distillers to their peers from a region in Normandy called Le Perche, where fine hard cider and Calvados have been made for generations. The project is a collaboration between Glynwood, an agricultural nonprofit in the Hudson Valley (the organization I work for), and the journalist Colette Rossant who, after living in both New York and Le Perche, recognized great similarities between the two regions.

This project sees potential for hard cider and apple brandy to preserve orchards in the historic Hudson Valley, where encroaching development, global competition and increased production costs are endangering family farms. Statewide, the number of orchards has decreased by nearly 75 percent since the 1950s, but local apple alcohol could turn fruit-growing into a growth industry — taking a page from the burgeoning local-wine movement. In just a generation, New York wines went from being altogether unknown to being proudly featured in the finest restaurants — with the number of vineyards in the state up by 25 percent between 1997 and 2007.  That expansion is the result of the evolving sophistication of local vineyards and the enthusiastic reception of city drinkers.

Ask the emerging artisanal cidermakers and distillers what single thing would ensure their success, and they will answer in unison: demand. As New Yorkers, we can provide that, deliciously, by developing a taste for local apple alcohol and requesting it in shops, pubs and restaurants. Let’s put a spirited spin on that old slogan, and drink an apple a day — to keep away the suburbanization of the Hudson Valley and the extinction of our original elixirs.  The apple has been used to represent everything from temptation (Eve) to innocence (apple pie), and it’s been our city’s symbol for decades. Now, with the Big Apple at the forefront of the local food movement, our namesake fruit could become our emblem of a vibrant culture of regional food and drink.

Let’s raise a glass of hard cider to toast apple biodiversity, orchardists’ livelihoods and a future of fine local brandies. America’s urbanization nearly wiped out our homegrown spirit. Let our city’s appetite bring it back.

Sara Grady is the director of special projects at Glynwood, an organization that works to save farming (glynwood.org). She has written for Edible Hudson Valley and likes her hard cider with a note of barnyard.  Special thanks to Jimmy Carbone of Jimmy’s No. 43 for his contributions to this article — and for his tireless support of real regional drinks.