Mixologists make their own. 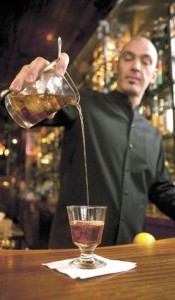 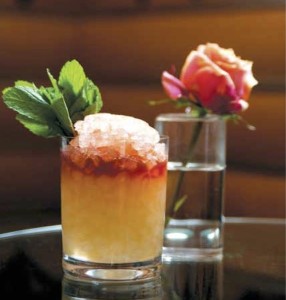 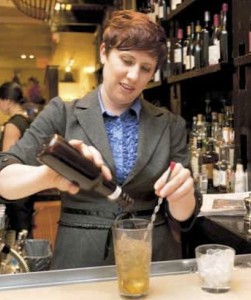 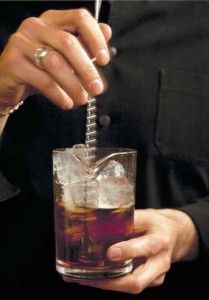 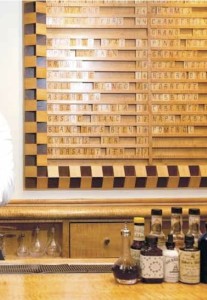 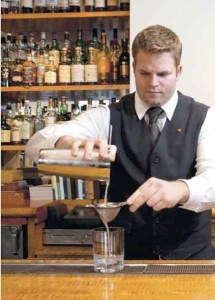 For Louis Smeby, it all started because he didn’t want junk in his drinks.

“It seems like a small thing, and it is,” he allows of the aromatic, highly alcoholic liquids called bitters, typically added by the dash to classic cocktails. “But if you look at the ingredients in commercially made bitters, they include things like additives, sweetening adjuncts, propylene glycol, a lot of synthetic colorings.”

He reasoned that if he didn’t want artificial ingredients on his plate, why would he accept them in a glass? Having already tackled beer-, bourbon- and cordial-making, he remembers, “I thought, ‘why not bitters?’” Drawing on his beverage background (he’d worked at Sixpoint Craft Ales, for starters) and personal interest in botany, Smeby started experimenting with seasonal bitters in unique combinations like licorice-nectarine, apple-cinnamon-molasses and even a mix meant to mimic the flavors of a black and white cookie.

What started as a homespun hobby became a business when cocktail king Jim Meehan began using Smeby’s bitters at PDT; bottles by A. B. Smeby Bittering Co. can now be found on some of the most serious drink menus in Manhattan, including the Modern (where Smeby moonlights as a server), August, Tipsy Parson, Il Buco and Blue Hill.

Smeby is not the only one intent on reviving this once-common bar craft: Bit by bit handmade bitters are making a comeback in Manhattan bars and boîtes, with unique artisanal flavors like lavender, Chinese five-spice, dill and dried tomato. Or the locavorecentric bitters handmade in-house at bar 1534, which combine ginger, rosehips and wormwood with Hudson Valley apples.

Lavishing such large amounts of attention on such a small component of cocktails might seem silly to some, but for drinks devotees a beverage without bitters is like a soup without salt.  “Bitters add a layer of aromatics to a cocktail,” says Leo Robitschek, head bartender at swanky Eleven Madison Park. “Bitters give you a chance to add a three-dimensionality to a drink,” echoes Dushan Zaric, bartender and proprietor of the classic cocktail dens Employees Only and Macao Trading Company, “to have a beginning, middle and end.”

If that seems like a big responsibility for an herbal liquid that comes in a bijou bottle and is literally dispatched by droplets into a drink, it’s actually far less ambitious a task than they were once averred to accomplish. Bitters, which are high-proof alcohol infused with macerated herbs and aromatics, were originally created as health tonics to aid digestion and made famous by snake oil salesmen who sold them alongside their potions and unguents.  So pervasive was their reputation as healthful that during the early days of Prohibition, bitters were still found in pharmacies—even though they are up to 90 proof.

But even better than their medicinal qualities were the depth and flavor profiles that bitters added to drinks. One of the first printed definitions of a cocktail in an 1806 newspaper article defined the beverage as “a stimulating liquor, composed of spirit, sugar, water and bitters.”

But Prohibition dealt them a bitter blow. Without bars to stock them and cocktails to put them in, like much of the beer, wine and spirits industries, the U.S. bitters business all but disappeared and never really recovered. That left bartenders and bevvy seekers to rely on a few surviving brands like Angostura and Peychaud’s. But being creatively constrained by the few flavors commercially available began bugging some barkeeps who wanted to explore further flavor combinations.

So they took matters into their own hands and started brewing their own. It might have been for need, but it was also for artistic expression, or even what you’d call integrity. Bartenders are partially drawn to the process as a nod to the tradition of the craft, and partially as an effort at authenticity and creativity.

“I think making bitters is the sign of someone who cares,” says Trace Conway, beverage director at Chelsea’s Red Cat, who creates unique bitters like lemon-ginger and peach-habanero. “Coming from a culinary background, I’m always thinking about how I can make something myself.  Using commercially prepared products when you can make your own always feels a little like Sandra Lee semi-homemade crap to me.”

“The first place we looked when we decided to try making bitters inhouse was Jerry Thomas,” says Robitschek of Eleven Madison Park. Thomas is the legendary 19th-century barkeep who published the first known mixology guide and is revered in contemporary cocktail circles. Robitschek’s repertoire now includes “Decanter” bitters made with snakeroot following a Thomas recipe. “What I love about bitters,” says Robitschek of their rich cocktail history, “is that they are so specific to an era.”

“If Jerry Thomas could make bitters in the 19th century, why shouldn’t we?” concurs Zaric. “It was really important for us to showcase our heritage.”

Still, even the most brilliant 1862 Jerry Thomas recipe is no guarantee of success for a generation of bartenders who have to rely on research rather than learning at the elbows of esteemed elders. “The first batch I made sucked so bad,” remembers Trace Conway. “Celery is hard. Rhubarb is difficult,” she says, noting that she leaves those flavors to small-scale commercial producers like the Fee Brothers and the Bitter Truth. “Things don’t always taste the way you think they will.” Even so, Conway keeps a case of Everclear 151 proof grain alcohol in the basement of the Red Cat for whenever the spirit to infuse spirits strikes: “I’m always playing with flavors,” she says, “and thinking about what certain aromatics could add to a drink.” Her lemon-ginger creation finds its way into a chai-spiced Manhattan; brandied cherry bitters are currently in the works.

Zaric and Robitschek also admit to plenty of failed experiments along the way—but the successes have been spectacular. At Employees Only a housemade absinthe bitter includes green chartreuse, the high-proof multiherbal monastic liqueur. The recipe took a lot of effort to perfect, but it gives a Sazerac cocktail true depth and vitality. Quinine bitters find their way into a traditional Vesper martini, and Old-Fashioned bitters made with tobacco, cinnamon, cloves and cardamom add complexity to classic cocktails like Manhattans, Sazeracs and Old Fashioneds. And at Macao Trading Company, a Chinese five-spice bitter made with 151 proof rum and brown sugar (“for balancing flavors,” says Zaric) is the defining note in the Mah Jong and Drunken Dragon cocktails. “We tried a lot of ideas,” says Zaric. “Lavender left us indifferent, but we have stuck with these.” Still in development are versions made with dried fruit and peels.

At Eleven Madison Park, they combine the bitters revival with another aspect of the craft bartending renaissance: cask aging.   That’s the practice of letting a liquor sit for a spell in a wooden barrel or cask previously used to age wine, whiskey or port, imbuing the new spirit with some of the flavors the former tenant left behind.  The staff at Eleven Madison Park were on a team-building outing at Hudson Valley’s Tuthilltown Spirits when co-owner Ralph Erenzo offered them a used whiskey barrel. The cocktail crew brought it back to the restaurant and set to work macerating, making tinctures and tasting, sometimes daily or hourly. The fruit of their labors is the cask-aged No. 11 bitters, which combine citrus, wormwood, chicory, hibiscus, vanilla, cardamom and other flavors to create a blend that adds a note Robitschek likens to the character of classic cocktails like that Manhattan.

Eleven Madison Park also uses traditional bitters like Angostura and Peychaud’s when a cocktail calls for it, and Robitschek sees his housemade concoctions as a creative complement to traditional offerings. “It’s not about replacing something,” he says, perhaps at odds with Louis Smeby’s anti-additive approach.  “It’s about creating something new.” He often consults the kitchen staff about flavorings, fortunate to have access to so many products and palates. In the works is a true combination of bar and kitchen with duck bitters, with which he hopes to replicate the honeyed peppery taste of the restaurant’s signature dish, which is glazed with lavender honey and dusted with star anise. Sounds bittersweet, and possibly delicious in a drink.