We caught up with one of the contributors for our upcoming travel issue to learn more abut his unique experience on a swordboat off the coast of Nova Scotia. 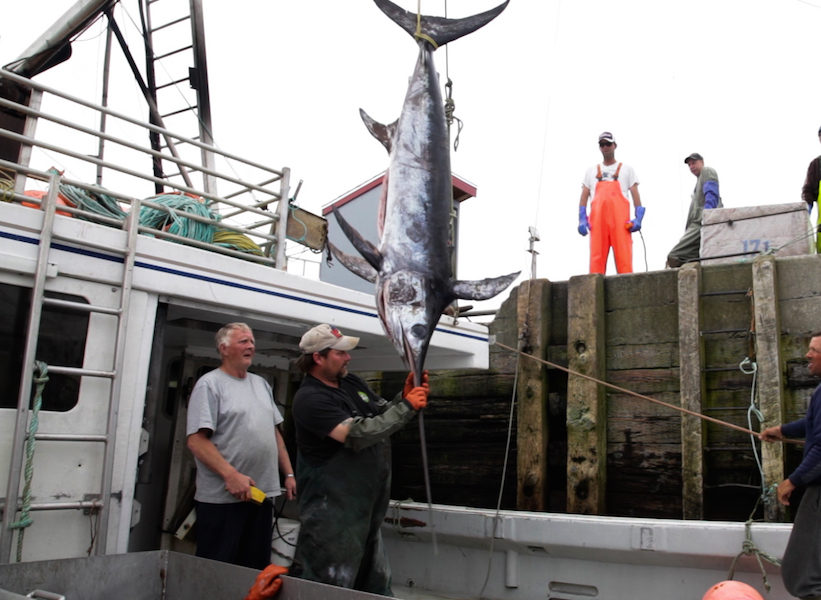 When most of us think of fishing, we probably imagine a relaxed afternoon spent casting rods with little rhyme or reason (at least we think of during a hot afternoon in late August).

In our upcoming travel issue though, our contributor David Flaherty acquaints us with a very different fishing reality: for swordfish, with a harpoon, off the coast of Nova Scotia. That’s hardly a bucolic image.

Flaherty recently joined with David McInerney, co-founder of FreshDirect; Jeff Ludwin, FreshDirect’s head meat and seafood merchant; and videographer Chad Heird on an excursion to develop a relationship with the fishermen who ultimately supply many of the company’s customers. At the same time, they had also come for “a chance for an ingredients-obsessed crew to better understand one of the foods that they sell to story-hungry customers, all the way back to how it lived and died.”

Curious about this wild opportunity, we asked Flaherty a few questions about his personal experience on a swordboat roaming the seas roughly 100 miles from the South Shore of Nova Scotia. Keep an eye out for our upcoming travel issue for the full story…

Edible Manhattan: What was the hardest thing about harpoon fishing large fish like swordfish? Had you done this before?
David Flaherty: Frankly, I didn’t know anything about harpoon fishing before this trip, so I did some cramming before I left. Despite all the advances in technology, (they’ve been swordfishing with harpoons in these waters since the 1880s), it still requires a brave soul climbing out on a plank that’s attached to the front of the boat. Here, they come face to face with the swordfish before striking. A clean shot sends the harpoon straight through the fish and out the other side.

Everything on these boats can be dangerous, especially if the weather gets nasty.  The small community that we visited has had six commercial fisherman deaths in the last six months alone. For these guys though, the dangers all part of the job. Their optimism and enthusiasm for life was infectious.

EM: Were there any scary moments?
DF: Sleeping that first night in my bunk (the second night I actually had to sleep on the ship’s metal hull as there weren’t enough beds for everyone), I swear I woke up every eight minutes. I’m from Colorado, so the sounds of the waves slamming up against the boat kept making me think we were going down. I got used to it, though (sort of). I was a bit terrified before we left after hearing a story about a fisherman who went to pee off the back of the boat in the night, and then just disappeared. They never found him. At that point, I decided that I would not be peeing off the back of the boat.

EM: Did you catch anything besides swordfish? Did you eat what you caught? Come to think of it, what exactly did you eat?
DF: Nothing else was caught since this type of fishing purely targets swordfish. It was actually the first swordfishing technique to receive a sustainable certification by the Marine Stewardship Council.

The guys on the Crustacean Frustration (the name of our swordboat) actually brought a bunch of fresh lobsters with them, so they made us up a dish the first night they called “creamed lobster,” which was basically steamed lobster meat in a cream and butter broth. It was super tasty. A lot of these guys were living on junk food, energy drinks, and cigarettes, though, which was kind of ironic since they’re bringing in some of the freshest, most prized seafood in the world.