Old, Underground Ovens Bake Some of the City’s Best Bread 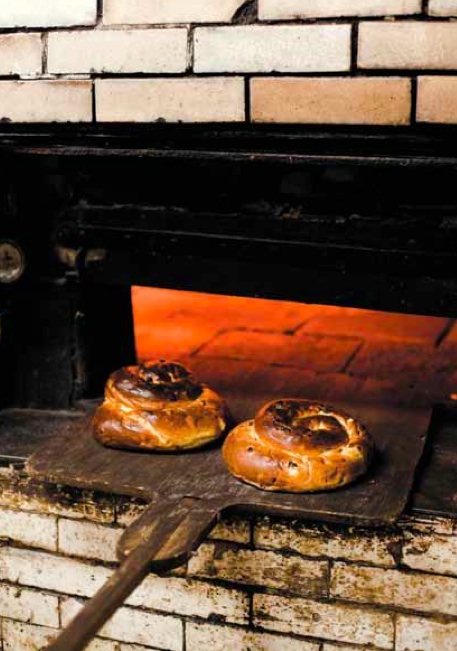 New Yorkers know the hottest spots to dine and drink are in secret locations with unlisted numbers. But in the world of baking, two of the city’s best ovens are quite literally underground.

Throughout the 19th and early-20th centuries, immigrants brought their old-world recipes to New York City, and Gotham’s ethnic enclaves were dotted with bakeries that produced an impressive array of traditional breads, from crispy kosher matzos to sour Russian rye to dark German pumpernickel. But tenement neighborhoods were so crowded that the only place to build a big oven was below ground: A 1910 survey found that more than 90 percent of the city’s bakeshops were in basements.

In 1994 Bruce and Eric Bromberg, the boys behind the mini empire of Blue Ribbon restaurants, were considering opening a coffee shop in an empty West Village storefront. While checking out the basement storage space they noticed a corroded door concealing a vaulted space behind the wall.

“We realized right away that it was a huge old oven,” Eric Bromberg recalls. “The landlord tried to tell us it was an old furnace, that we could brick it over and forget about it.” But having trained in the famed bakeries of Paris, the Bromberg brothers saw it as a gift of fate. The oven measures 14 by 18 feet, and they knew it would be impossible to construct anything like it today, so rather than fuggedaboutit they set about restoring it, and building Blue Ribbon Bakery around it. To convince the city that the oven was safe to operate, the team spent over two years poring over old records in order to prove that the oven was part of the original structure and had been safely used, albeit long ago.

“It was as much an archaeology project as it was about building a business,” says Eric. Through their research the brothers found the oven dates to about 1860, when the property was a boarding house, and the subterranean space was a communal kitchen for roomers. Near the turn of the century, the space became a commercial bakery but around 1960 it went out of business. The oven was bricked over and forgotten.

The Brombergs felt it was their destiny to restore the oven, but everyone they approached told them to skip the hassle and buy a modern stone deck oven. Then one day they flagged down a firewood deliveryman and asked if he delivered to any bakeries with wood-burning ovens. This led them to a pizzeria in Brooklyn where Alfredo Agozzino, a master oven-builder from Naples, happened to be visiting his relatives.

“When he saw the oven, he hugged the wall and kissed it and said ‘beautiful,’” recalls Eric. “We knew we had found our man.” The brothers wrote him a check on the spot, and Alfredo flew home to Italy to gather supplies. Seven weeks later, laden with pallets of volcanic ash, he returned to New York, where he would spend 19 months restoring the oven to its original glory. In the meantime, the Brombergs built a restaurant around it, configuring the space so the ground-floor restaurant connects to the basement.

Blue Ribbon Bakery opened  in 1998, and the oven has been in almost constant use since.

“We fire the oven up four times a day to bake,” explains Blue Ribbon partner Sean Sant Amour, “but it can hold heat for up to a week.” The oven can get as hot as 700 degrees, ideal for baking rustic bread with crispy crusts.

But the attraction can’t be fully measured with a thermometer. Eli Zabar, namesake of famed Eli’s Bread, spent several years baking in a basement brick oven that he discovered while remodeling his store. He says that the heat from brick ovens brings out the flavor in wheat in a way that other ovens simply can’t. “The texture of the crust you get from an oven like that is amazing,” he adds.

While the Brombergs and Zabar refurbished what they found underground, Orwasher’s on the Upper East Side has been keeping traditional bread-making alive for nearly a century. The subterranean brick oven there has been firing since 1917, when the neighborhood was populated predominately by Eastern Europeans. Churning out loaves of pumpernickel, rye and challah, the family-run bakery weathered two world wars, several recessions and a radical change in local demographics. Baker Keith Cohen, who previously worked at Tribeca Oven, bought Orwasher’s in 2007, and says the bakery’s history was a “huge appeal.” He now bakes most of his loaves in an updated kitchen, but honors history weekly, when he bakes challah and other rustic breads in the original oven.

Like many Upper East Siders, the oven’s “had a little work done”—the heating chamber beneath the oven, which burned coal for decades, got updated with a blasting gas burner that heats the oven up to over 700 degrees. Still, Keith says working it isn’t always easy. “You really have to pay attention to the bread in a way you don’t when you’re using modern equipment.”

Back at Blue Ribbon, Eric echoes that sentiment: “There is no less efficient way to bake bread,” he laughs. “Each day the bread is a little different, depending on the conditions in the basement.” But if inconsistencies exist, customers aren’t complaining: The oven at Blue Ribbon bakes 2,000 loaves a day, supplying all of the Blue Ribbon restaurants as well as 31 wholesale accounts with a dozen types of bread, including a sublime classic baguette, a hearty nine-grain with a touch of honey and a matzo so crisp and flavorful that it might convert you to Judaism.

“We realized how spectacular the oven was,” says Eric, “and we dedicated ourselves to preserving this piece of history.”