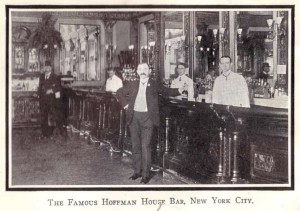 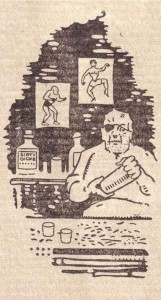 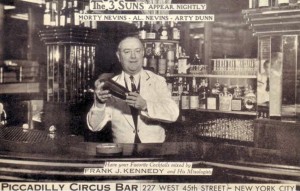 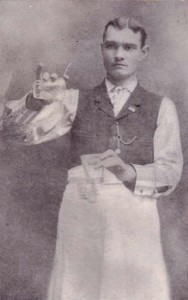 The present-day craft cocktail craze doesn’t just make it difficult to get a seat at a good bar on a Thursday night. It’s also made many a long-forgotten mixologist a part of the cultural infrastructure, if not a household name. Saloon-age knights of the shaker and spoon such as Jerry Thomas, Harry Johnson and William Schmidt have had their books reprinted, their drinks resurrected (if you’ve tippled in any of the city’s new craft cocktail bars, you’ve almost assuredly partaken of them), their deeds researched and their graves visited by packs of tipsy pilgrims.

But the canonization of these few cocktail creators overlooks other old-time bartenders who merit celebration, if not sainthood.  Ones who, although they never felt the need to collect their recipes and put them out in book form and would most likely have greeted an order for a Brandy Crusta or a Santina’s Pousse Café by scratching an ear and asking if you wouldn’t mind talking plain English please, were in their day just as famous as the mixologists, if not more so.

They had other talents, you see. Take Andy Horn, a so-called “Champagne Fritz”—that is, a prosperous German immigrant— who from 1888 until his death in 1900 ran an all-night saloon on Park Row next to the entrance of the just-completed Brooklyn Bridge. Horn’s skills lay not so much in manipulating the spoon as the knife. A former butcher who “as a young man…had tremendous strength and was the champion beef dresser in the city,” as the New York Sun recalled in 1911, “Andy could carve a roast…until there was nothing left but bone…and he could slice more disks from a single length of liverwurst than any man in the business.” If the liverwurst was a bit thin, no matter: the sandwiches Horn made with it, along with the cheese sandwiches, the roast beef and the big pots of authentic German gemüsesuppe that came up from the basement kitchen periodically throughout the day and night were all free with a nickel glass of beer or a dime glass of whiskey—pretty much the whole of the bar’s liquid refreshments. (Nowadays, McSorley’s, Manhattan’s last remaining establishment in the Andy Horn mold, charges good money for the same fare.)

But there were plenty of other joints that had a good free lunch (it was always a “lunch,” even if you ate it at 2:45 in the morning); that were cozy and companionable and cheap. What made Andy Horn famous was a phenomenon noted by the great Joseph Mitchell, who before he went on to literary fame at the New Yorker spent eight years chasing down stories for the World, the Herald Tribune and the World-Telegram.

“Within a few blocks of virtually every large newspaper in the United States except the Christian Science Monitor,” he wrote in 1935, “there is a saloon haunted by reporters, a saloon which also functions as a bank, as a sanitarium, as a gymnasium and sometimes as a home.” Andy Horn’s was that bar—and not just for one paper, either. Park Row and its vicinity was the center of New York’s thriving newspaper business (home to the offices of literally dozens of daily papers) and, as one of them noted when Andy Horn’s finally closed its doors, 10 years after its founder’s death, “Every man who ever put a hand to making papers in Printing House Square (the area off Park Row that was the epicenter of the industry) found this quaint tavern a welcome harbor at all hours of the day and night.”

To qualify as a true newsman’s home, a bar needed to meet a pretty specific set of criteria. Newspapers being assembled at night, it had to close very late and open very early, or better yet not close at all. There had to be a kitchen— what’s a home without one?—and the food it turned out, while not fancy, had to be at least able to sustain human life. The beer had to be good and the whiskey undiluted, but mixology was unessential—although the ability to stir up an old-fashioned Gin Cocktail for a morning sufferer or turn out a hot Whiskey Punch when the icy wind was blowing in off the river was always gazed upon kindly.  Also unessential was any attempt at decor. Indeed, fancy fixtures were for all intents and purposes a disqualifying feature: Journalists were working men, not members of the professional class like they tend to be now, and even if they could have afforded exquisite surroundings, such things would not have sat well with them. Andy Horn’s had nothing to worry about on that account, being “a tumbledown frame structure” a mere 16 feet wide that the New York Sun thought “would make good kindling wood.”

Horn’s met all the other criteria handily as well: It was open all night, when Andy could get that kind of license, and nearly so when he couldn’t. The food was—well, as the Sun recalled on the bar’s closing with a note of genuine sadness, “more than one anonymous maker of to-morrow’s news—from compositor to reporter—got his ‘second wind’ over the steaming soup tureen at Andy Horn’s place.” The beer was fine, the whiskey strong and if you wanted a Gin Fizz or some such frippery you could go to the bar right next door and get one from William Schmidt, who worked there.

But even if a bar checked all the other boxes, that wasn’t enough for it to become a true journalists’ home. Reporters being human, more or less, they had a tendency to economize on expended effort when they could get away with it. If they were going to inhabit a joint, in other words, there had better be a story there.  For that, the kind of clean, well-lighted place where everybody spoke politely to each other and didn’t put too much of a bend in the King’s English; where sober deportment and quiet conviviality prevailed, simply wouldn’t do. It wasn’t even enough that the place be lively, if it was lively in the conventional way. Should a customer, vexed with the bartender, call him a son-of-a-bitch, that’s no story. If, however, he calls the man behind the bar a “pie-faced Garoo,” then you’ve got something to write about. Particularly if his name is “Jimmy the Beefer” and he’s sporting “a cigar tilted at an angle of 45 degrees, a slouch hat pulled down over one eye, a loud check suit and a pair of second-hand patent leather shoes.” (That was one day, back in 1895, a lucky Sun reporter didn’t have to leave home to get his story.)

To run a true newsman’s bar, you needed to be a character, and run the place as a haven for characters: reporters, to be sure, and their associated printers, newsboys, editors and whatnot, but also oyster shuckers, streetcar drivers, bootblacks, stock jobbers, actors, pettifogging lawyers, ward heelers, bushy-bearded anarchists and, in short, men (and even the occasional female) from any of the countless tribes that inhabit a great city, as long as they were colorful. If you got the mix right, you would find your sayings and doings granted immortality, or at least whatever portion of it can be conferred by a form of writing destined to end up as drawer lining at best and fish wrapper at worst.

Occasionally you might do a little better than that. After Andy Horn’s death, his position as dean of the Park Row barkeep ers was inherited by Jerry O’Donnell, a 30-year veteran of the trade known universally as “Red Jerry.” Unlike Horn, Jerry was never his own boss, but such was his celebrity that he fired owners, rather than the converse. A big, bluff red-headed Irishman, his zookeeping talents were such that in 1900 J. Joseph Goodwin, of the Sun, began a series of weekly stories about him and certain members of his menagerie, chief among them being such worthies as Sarsaparilla Reilly, “Sinkers” the German (a “sinker” being a donut in the argot of the day), Batchgaloop the Undertaker and Napkin Annie. Before long, these columns mounted up and Goodman turned them into a book, The “Sinkers” Stories of Wit and Humor, where they can be found to this day if you know a good rare book dealer. But while Goodwin was a reporter first and foremost, other, more imaginative writers took the same material—the same loopy barroom logic, fractured English and gambler’s optimism—and transformed it into literature. Without Andy Horn and Red Jerry and their ilk, O. Henry would have written cowboy stories, A. J. Liebling restaurant reviews and Damon Runyan nothing at all.

After Prohibition, newsman bars once again flourished in New York, at least for a time. Joseph Mitchell’s beloved Dick’s, a couple of blocks west of where Park Row meets Broadway; Bleek’s in Midtown; the legendary Costello’s on Second Avenue and a handful of others carried on in the classic manner until the Second World War. Afterward, with newsmen taking advantage of the G.I. Bill to become journalists, and hence professionals, the old shenanigans fell out of fashion.

Nowadays, rowdy bars are left to the young and the NYFD. To become famous as a bartender, one has to be a master mixologist.  I have the utmost respect for a craftsman behind the bar, but just once I’d like to walk into PDT and see someone call Jim Meehan a pie-faced Garoo, or have the girl sitting next to me at Audrey Saunders’s Pegu club artfully snap a palmed coin against the glass that held her Gin-Gin Mule, scream and spit out glasslike shards of ice on the bar, like the character known as “Jeeter Lester” used to do at Dick’s. And if my Fitty-Fitty entitled me to a free liverwurst-on-rye and a bowl of soup, I think I might very well start getting my mail delivered there.