A Century Ago, Fast Food Automats Designed a New Way to Dine 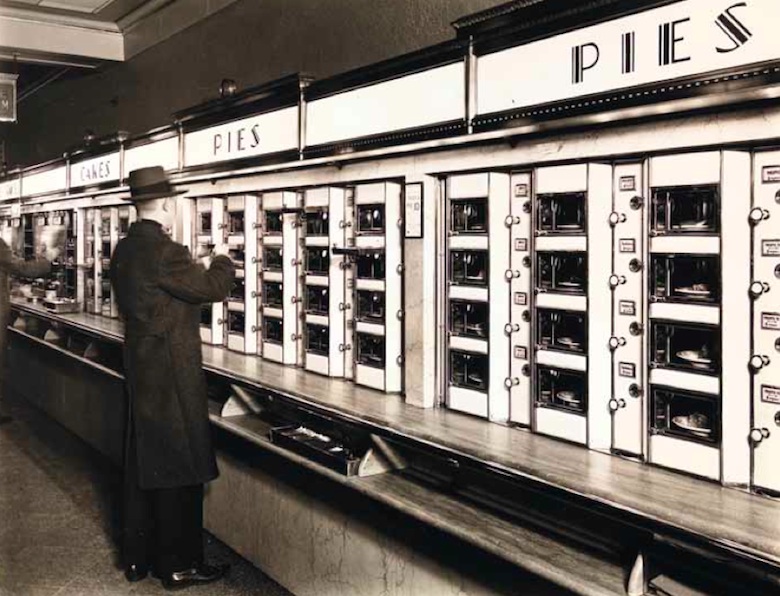 Modeled after a “waiterless restaurant” in Berlin, Joe Horn and Frank Hardart had opened their first Automat in Philadelphia in 1902. Its walls were lined with glassed-in compartments that proudly displayed the dishes of the day, all of which the mechanical marvel dispensed without the assistance of servers. Hidden from sight was $30,000 of imported equipment that delivered food from a concealed kitchen directly to diners. Instead of placing an order, customers simply placed a nickel or two in a slot next to one of the compartments and promptly retrieved a slice of pie or plate of pork and beans.

In 1912, when Horn and Hardart opened an Automat in the heart of Times Square, New York’s growing class of white collar workers quickly embraced the experience as a lunchtime institution. Within 10 years, the partners opened an Automat capable of feeding 10,000 customers a day, making it the city’s largest restaurant and soon expanding to 40 locations in the city alone. Prices were low, but atmosphere was decidedly high. Most Automats featured two-story-high dining spaces with lavish Art Deco details, from patterned terrazzo floors to finely wrought brass lighting fixtures. Steaming hot coffee was dispensed from Italian-crafted spouts shaped like the head of a dolphin. At round milk-glass tables, diners found the standard sugar, salt and pepper as well as such exotic additions to the canon of condiments—Worcestershire sauce and celery salt.

Eating at an Automat became a quintessential New York experience. Wealthy Upper East Siders dined on macaroni and cheese and lemon meringue pie alongside downtown’s down-and-out, and by the 1950s there were more than 150 Horn and Hardart Automats and retail shops in cities across the country, making the Automat the world’s largest chain restaurant. New York’s 40 outlets alone grossed $42 million. But the advent of a different breed of fastfood franchise would ultimately spell its demise. The last Automat, on Third Avenue and 42nd Street, closed in 1991.