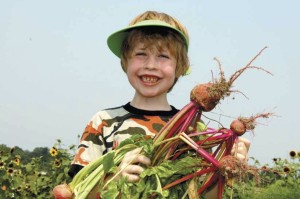 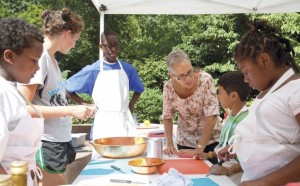 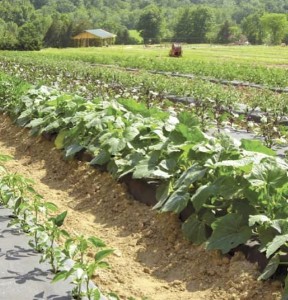 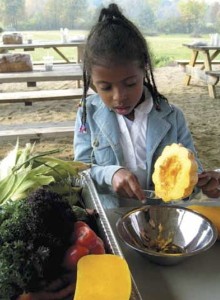 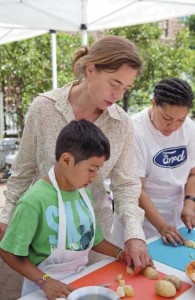 The community room of the Rutgers Housing project on the Lower East Side is an unlikely setting for planting seeds; the greenest things in sight are the cinderblock walls, painted a fluorescent lime. But the fertile soil in question today is the minds of six 9- and 10-year-old boys and girls, who are taking part in a pilot culinary program developed by the Sylvia Center, a New York–based educational foundation dedicated to awakening urban kids to the notion that fresh vegetables come from farms, not supermarkets, and, as their mission plainly states, “Inspiring children to eat well.”

On this Wednesday morning, a Sylvia Center chef and her three interns are hosting the second in a series of cooking classes designed for the center’s main targets: the children of lower-income families, many led by first-generation immigrants who depend on food stamps and other public assistance for their meals. Poverty and obesity have proven to be close companions, and the Sylvia Center’s fledgling program—with help from the Mayor’s Fund for the City of New York and Rachael Ray’s Yum-o Campaign—strives to break that bond, and to establish healthy palates early in life.

In fact, the goal for Liz Neumark, the 54-year-old who runs the elite catering company Great Performances and founded the Sylvia Center in 2006, is to eventually offer these classes for children in all New York City Housing Authority residences citywide.

Neumark has been an advocate of sustainable agriculture and local food since before they were buzzwords—Great Performances is the only Manhattan catering company to source from its own organic land upstate, a 60-acre tract in Columbia County called Katchkie Farm—but she established the Sylvia Center as a tribute to her daughter Sylvia, who died in 2003 of a brain aneurism at the age of six. The broken-hearted chief executive almost walked away from her business, but decided instead to reach out to children who were her daughter’s age to teach them what she knew: good food, in every sense of the words.

At the time, Neumark was already a major culinary figure in Manhattan, thanks to her multimillion-dollar company on Hudson Street known for its roster of tony private clients and concession stands at prominent sites (the Plaza, Lincoln Center), its theatrical flourishes (a former photographer, Neumark actually started the company to help artists supplement their incomes), its revenues ($35 million in 2007), and its innovative menus, which included an option to go green well before most restaurants were promoting their local heirloom tomatoes.

The idea for the Center came in part when Neumark stumbled upon 60 acres of scrubby, overgrown farmland in Kinderhook, New York, back in the early 2000s. She envisioned a place that would not just provide Great Performances with plenty of produce for catering and city concessions, nudging the enterprise closer to her dream of full self-sustainability, but as a space that could also play host to city kids who’d never seen a tractor in action.

Katchkie—a family nickname, it’s Polish for “duck”—is now the brand name for Great Performances’ own line of artisanal pickles and canned goods (Katchkie ketchup, featured last summer in this magazine, is outstanding), sells at three farmers markets a week and donates 5 percent of its harvest to food banks. But just as importantly to Neumark, it’s the upstate outpost for the Sylvia Center, a place where inner-city students can experience chickens, pigs, watermelon vines and weeds as part of their coursework. Inner-city school buses now rumble up the Taconic Parkway, unloading elementary school children who have only seen farms on television. In three-hour programs, they have the opportunity to pluck vegetables fresh from the vine, watch hens skitter across the field in search of insects, inspect a compost pile and even plant seedlings with Farmer Bob—in other words, to take an active role in the farm’s cycle of life. They can visit twice a year: In spring, they plant pumpkin, snap pea or squash in the Katchkie greenhouse; in autumn, they return to experience the joys of the harvest. The program is rounded out by a vivid farm-to-table exercise, where the children use freshly picked produce to create a lunch of green salad and minestrone soup.

In the city between visits, the kids learn to cook. The Sylvia Center’s housing project pilot is designed to be hands-on, to encourage children to make healthy food choices in the future, says Anna Hammond, the center’s executive director, and that’s taken literally. In the Lower East Side, for example, 3½-foot-high cooks-in-training crowd around a table where Sylvia Center’s Hollie Green, a blond dynamo in chef whites, explains today’s lesson. On the menu are stuffed zucchini boats, and many of the kids shoot the squash quizzical looks. But, Hammond explains, easing in unpopular produce is part of the plan. The recipes, which the kids take home, are designed to emphasize age-appropriate fun as well as teaching culinary skills (blanching, sautéing) that young hands can manage.

“Working with your hands and your senses is a kind of direct experience that is a palliative to the insanity of our very, very noisy world,” says Hammond. “Having to actually cut something and tear it and taste it puts you back in your own body.”

After Green offers a brief but emphatic lesson on how to hold a knife—keep small fingers clenched in a bear claw to avoid the blade—the Rutgers residents resume their high-pitched chatter and enthusiastically tackle their mise en place. Joel Allette, a Sylvia Center intern, teaches the kids to scoop the flesh from the zucchini. Just 15, Allette has already proven his culinary chops; the highschooler participated in the Teen Iron Chef competition, a national culinary program that pits budding chefs in cooking contests.

Another intern, Courtney Coaxum, demonstrates the dexterity required to crack eggs for the zucchini-boat stuffing. By any measure, Coaxum, 19, is a model for the effectiveness of Sylvia Center’s culinary programs. The teen girl was homeless a few years ago when she came to one of the Center’s culinary programs. The classes bolstered her passion for cooking, and she revealed an aptitude that made the staff take notice. Now Coaxum helps operate the summer program at Rutgers and Swindler’s Cove while she continues to hone her kitchen talents.

Currently Coaxum, who is working to flip a pan-fried egg without a spatula, has plans for a career as a chef. But she reminds her students that culinary skills are important, no matter what your future. She pauses and adds with a sobriety born of personal experience, “Your mother and father’s not going to be there forever.”

Ambitious in their scope, and occasionally chaotic in their execution, the Sylvia Center operation displays an abiding humanism that unifies its elements. Neumark, honored numerous times for her humanitarian efforts and business acumen, works energetically to maintain Sylvia Center, and fundraising is an ongoing priority. She acknowledges the intensity of juggling Great Performances, Sylvia Center and Katchkie Farm. But it’s far from a complaint.

“You have to love this business to be in it. You have to be a certain kind of crazy.”

Growing the Sylvia Center mission, she says, is a steady but gradual process. In addition to the one-day classes, summer series and farm visits, multiweek programs welcome parents and caregivers to work alongside the children.

At her Great Performances headquarters on Hudson Street, a group of children in orange T-shirts bustle out the front door, energized by their own zucchini boat session. The space is the high-energy headquarters for the empire Neumark has built: It’s home to the business offices for Great Performances and Sylvia Center, as well as the open catering kitchens, where scores of chefs and workers prep pan-seared Arctic char with cauliflower mousse, dodge deliveries from the Greenmarket and Katchkie Farm, and carry trays of ginger parsnip puree, leek and potato ragout, Tuscan-style cannellini beans and pomegranate carrots onto trucks at the loading dock, likely as not heading for a deep-pocket charity dinner Uptown this evening.

In the middle of this frenzy, education coordinator Nina Simmons is cleaning up after today’s four-hour class with seven- and eight-year-old students from the St. Aloysius Education Clinic of Harlem. The Hudson Street space is also home to cooking classes. The public housing cooking series is underwritten, but for trips to Sylvia Center kitchen-classrooms, teachers must dip into school field-trip budgets to cover the nominal fee, typically $10 per child for a two-hour class.

A former theater actor, Simmons began volunteering at Sylvia Center two years ago and now creates its culinary lessons, drawing on educational and cooking guides. “I won’t say that we get to every child,” says Simmons, “but I’d say the percentage is really, really high of children who have such positive experiences opening their palate and gaining a sense of adventure.”

Until now, there was no mechanism in place to scientifically assess the programs’ impacts, but a pair of graduates from Teachers College with degrees in nutrition recently began to monitor and evaluate the Sylvia Center–Katchkie Farm process.

In the meantime, Simmons says, anecdotal information alone can be encouraging to the staff. She cites a boy who recently returned to the Hudson Street kitchens. He announced that he now gladly eats zucchini every time it is served because, he explained with visible pride, it reminds him of the zucchini boats he made at Sylvia Center last year.

For Neumark, that’s exactly the kind of thing she hopes will happen after children take classes. They taste something new or discover something they thought they didn’t like was delicious—a sliver of fresh pear, a stalk of broccoli—and they remember those lessons at meals and at markets down the road. Like growing vegetables, she says, “it’s like planting little seeds.”

Photos courtesy of Matthew Monteith and the Sylvia Center