This Indelicately Named Invasive Weed Might Be a Gardener’s Bane, But is Good Eating 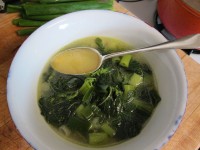 Pigweed is a sprawling invader of cultivated lands and gardens and has probably made a lot of money for the agricultural chemical industry. In fact, it has grown resistent to herbicides. Common names get you into botanical trouble, so to be clear, the pigweed to which I refer is Amaranthus retroflexus, known commonly as rough pigweed, or redroot pigweed. There are many, many others, all more or less hated by farmers and gardeners, all eclipsed by the tall red amaranth we know and love so much better, whose seeds fed the Aztecs.

On my Brooklyn terrace pigweed comes up every year in two pots where I grow roses. Every July and August it reaches tropical proportions, and one year I took a closer look as I snapped off a thick stem before trying to tug it out by the roots. The leaves looked familiar. Back in South Africa where I grew up, Selina Titoti, my parents’ housekeeper and family friend, often wanders into my mother’s garden and the nearby parkland and comes back with handfuls of green stuff. She refers to the plants collectively as morog (maw-RAWG, the g is a soft guttural cat-hiss): wild, edible leaves. She cooks these up quickly with the green parts of scallions, water or broth, and perhaps a little potato (at this stage it is normal to add mealie meal, similar to polenta flour or corn grits, but Selina does not). The resultant vegetable stew is fresh and earthily rich. Eating it, you can almost feel its minerals coursing though you, which is exactly what it was designed to do. The daughter of farm laborers, Selina grew up foraging in order to supplement an inadequate diet.

The morog in Cape Town does not look too different from a basket of foraged or farmers’ market greens in New York. It might include young thistles, dandelions, purslane and…the leaf I recognized from my past in my pots: pigweed, or amaranth. In Africa and the USA these plants are invaders, one and all, but as old as the hills they grew on.

And instead of cursing it, I now use it to make morog which must be indistinguishable from a country or peasant soup in Turkey, Slovenia, Italy. Its leaves have an excellent, substantial mouthfeel and a flavor somewhere between mild spinach and beet greens. In fact, if I can choose, I prefer it over spinach, which I find a little slippery. So I substitute pigweed for spinach as a side dish, blanching it, refreshing it and then tossing it with olive oil and garlic in a hot pan. I top crostini with the wilted leaves. I make a South African stew called a bredie (BREE-year-deeh), which is characterized by a slow-cooked meat base of either lamb or chicken to which onion and one type of seasonal vegetable are added. Cloves, ginger, cinnamon, chile, vinegar or lemon juice are also typical additions. Pigweed is good with steak. And I make the simplest soup: Pigweed cooked quickly with scallions and some chicken broth, cooled, then whizzed up with yogurt, chilled, and dusted with ground sumac before serving.

I have found references warning that pigweed can contain toxic amounts of nitrates, absorbed from the nitrogen in fertilizers. So avoid plants nestling in the furrows of agribusiness operations. The leaves also contain oxalic acid (just like sorrel and spinach, and we have survived eating them). But these warnings are more pertinent for those who might consume a great deal of it, raw, on a daily basis. If in doubt, blanch and pour off the water before using the vegetable. India considers this pigweed a good food, West Indian callaloo can also contain pigweed, and it was eaten here in North America long before most of us arrived.

In other words, I think we ‘ll live.