KelSo’s Kelly Taylor is Hop Happy, and For Good Reason

A brewer for two boroughs. 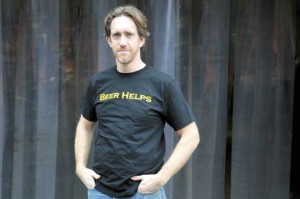 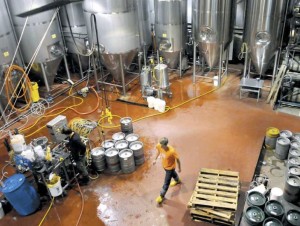 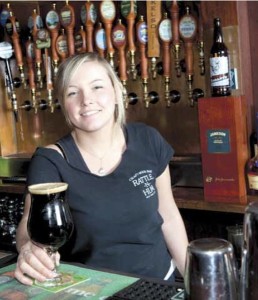 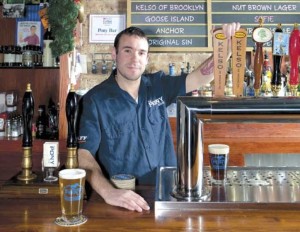 For a while there, it was too easy for Kelly Taylor to get tipsy on beer. This was a peculiar problem for Taylor, given his profession.  As Heartland Brewery’s brewmaster, Taylor spent his days concocting signature suds such as the fragrant Indiana Pale Ale or harvest-friendly Smiling Pumpkin Ale.

But at night, when he and wife, Sonya Giacobbe, unwound at Williamsburg good-brew haunt Mugs Alehouse with a pint or two, they found the selections on offer, such as Stone Brewing’s aromatic IPA or burly Arrogant Bastard ale, too intense. “Those are great beers, but if you have a couple 20-ounce pints of a 7.5 percent beer, you’re kind of schnookered,” says Taylor, 40. (For reference point, a Budweiser is 5 percent alcohol by volume, or ABV.) “Sonya and I were tired of that assault on our senses. We wondered, ‘Why isn’t anyone doing really good 5.5 percent beer?’”

The couple’s thirst for fresh, flavorful, low-alcohol session beer (so called because you can savor several in a single drinking session) was more than idle barstool banter. In 2006, after petitioning his Heartland bosses and Greenpoint Beer Works, the Brooklyn-based brewery where he produces Heartland’s suds, Taylor got the go-ahead to create a new line of brews. While still brewing for Heartland (whose beers are only sold at the brewpub chain), he’d establish a beer business of his own, called Kelso of Brooklyn, a mash-up of Kelly’s and Sonya’s names.

Since the first batch of Nut Brown Lager hit NYC bar taps in 2006, Kelso has become a favorite by swimming against the tide of potent imperial stouts or super-bitter India pale ales (IPAs). If these extreme beers are Fourth of July fireworks, then Kelso’s are long-burning sparklers. “One of the reasons that people do these aggressive, over-the-top beers is to get attention,” Taylor says. “At Kelso, we’re making layered, interesting beer that a connoisseur can savor, or a novice can knock back.” That easy-drinking liquid lineup includes the balanced, floral Pilsner; hopped-up Nut Brown Lager; and the light, citrus-accented Saison, a Belgian farmhouse ale. None of these beers tips the scales at more than 6 percent ABV.

“You don’t need to push the envelope to make a memorable beer,” says Giacobbe, 39. “I want to be able to have two beers with dinner and still be able to give my kids a bath,” she says, laughing.  (Gabrielle is nearly five, and toddler Cameron is almost one.)

The couple’s journey to Kelso started in Seattle, in the ’90s.  At the time, Taylor (who began brewing in his dorm room at San Diego State University) was working in the special events and marketing department for Seattle’s Pyramid Breweries. There, he met Giacobbe, a server with a superb knowledge of beer thanks to a stint at Washington, D.C.’s legendary Brickskeller bar. Their devotion to beer grew into love for each other and Giacobbe—who grew up in and around New York City—convinced Taylor to relocate to the East Coast in 1998. He hoped for a brewing job in the Big Apple.

“Nobody was hiring,” Taylor recalls. He fell back on his college degree in international business and took a job with the Mitsubishi International Corporation. He traveled the world selling chemicals and synthetic rubber, but the suit-and-tie life didn’t suit him. In 2000, eager to get back into brewing, Taylor began perusing the message boards on Probrewer.com, a Web site where brewers sell equipment, trade hops and post jobs—such as an assistant-brewer opening at Heartland Brewery. Taylor headed to Heartland bearing his résumé attached to a bottle of his homebrewed Not Tonight Honey Porter, a “kitchen-sink beer” swimming with molasses, honey and licorice root. He was hired that day.

“He’s been instrumental in moving our standard beers way ahead and upgrading them,” says Jon Bloostein, the founder and CEO of the Heartland Brewery Group. “He’s done a very beautiful job.” Changes included doubling the amount of hops in Heartland’s Indiana Pale Ale, and otherwise reworking each formula to perfection. He relates the story of Heartland’s coffeeinfused Oren’s Daily Porter, originally made with a very “bright” coffee. Taylor switched to Sumatran beans, to everyone’s delight.  “He’s very good at fine tuning.”

While Taylor remains brewmaster at Heartland to this day (still producing Not Tonight Honey, among many other beers), it’s at Kelso that he lets his impulses run wild. “There’s a little more of, ‘What do we want to brew this week?’” he says. To devise his brews, he works closely with Giacobbe, Kelso’s director of product development.

“She’s responsible for a lot of our new concepts and beer styles,” Taylor says of his wife, with whom he holds numerous tasting sessions. If, say, they’re looking to brew a stout, they’ll buy numerous examples of that beer style, then pick out the flavors they favor. “She has a very good descriptive palate,” Taylor says.  “She’ll say, ‘I like the astringent coffee roastiness,’ and it’s my job to put the layers in there.”

Though Kelso initially focused on tasty, easy-drinking lagers, the brewery has become adept at exploring brewing’s flavorful frontiers. The summery Carrollgaarden Wit is a crisp refresher spiced with dried orange peel, chamomile and coriander. To create the limited-release Flemish Red, the Belgian-style beer is aged in oak barrels for upward of two years, resulting in a tart and fruity tongue-tingler. And for the plainly named IPA (“I like simplicity,” Taylor shrugs), the brewers turned to a little-known New Zealand hop called Nelson Sauvin.

Partly named after the sauvignon blanc grape, Nelson provides a juicy, tropical flavor that verges on passion fruit. In early 2010, Taylor was so enamored of the hop that he purchased as much as his supplier could provide—about 20 pounds, divvied up into two-ounce packets typically reserved for homebrewers. The results were transcendent. The IPA was bright and fresh, boasting a soft, fruity profile, a refreshing counterpoint to the overly rich and bitter IPAs filling tap lines citywide.

“When I first tried it, I couldn’t believe what I was drinking,” says Patrick Donagher, co-owner of Midtown’s craft-beer haven Rattle N Hum Bar & Kitchen, who bought 10 kegs right off the bat. “It had a great hop bite and was a phenomenal beer.” In keeping with his commitment to local beer, Donagher often has at least one Kelso on tap. “They’re really starting to come into their own. Kelso is becoming a local favorite and a staple,” Donagher says.  “People are surprised by how good Kelso is, and that it’s made in Brooklyn,” says Dan McLaughlin, the co-owner of Hell’s Kitchen craft-beer standout the Pony Bar and a big fan of Taylor’s Pilsner. “It’s crisp without being super-hoppy and not watery or thin. It’s a well-made beer,” says McLaughlin, acknowledging that such a straightforward brew requires real skill. “It’s harder to make a beer you can drink every day than a beer with high ABV and lots of hops, which can mask defects.”

Inspired by ingredients, Taylor has experimented with hyperlocal beer. For several years, Kelso has collaborated with Blue Hill at Stone Barns, Dan Barber’s celebrated farm-to-table restaurant in the lower Hudson Valley, to create original beers made with the Stone Barns harvest. The brewery blended roasted-beet puree with the Chocolate Lager; infused the Pilsner with lavender and honey; and flavored the Nut Brown Lager with chocolate mint and honey. Though Taylor enjoyed perfuming his brew with the farm’s bounty, he was eager to get his hands on an erstwhile upstate ingredient: hops.

The bines, which sprout from tuberous rhizomes, happily took to New York soil. They require several years to mature but the first harvest of the Nugget and Cascade varieties, in 2009, provided a small, healthy crop. Last year’s yield was higher, resulting in about 10 pounds of hops split 50-50 between Vaccaro and Taylor—admittedly infinitesimal compared to the 60 million pounds of New York hops harvested in 1870, but the brewers were thrilled.  “They were some really nice hops,” says Taylor, who added the justplucked crop to a batch of his Pilsner. The resulting beer, which was served at Blue Hill, was grassy and fresh—terroir by the pint.

Kelso is also committed to community. Taylor says beer isn’t (just) for getting blotto—it also brings people together. To wit, Kelso often donates beer to not-for-profits such as Just Food and the National Resources Defense Council, and hosts fund-raisers for organizations including City Harvest. “Our motto is, Beer Helps.”

And sometimes Taylor and Giacobbe could use help themselves.  Running a fledgling brewery, along with raising two children, requires remarkable juggling. Since Giacobbe quit her job at a talent agency to focus on Kelso and family, her life involves “a lot of coffee and not a lot of sleep,” she says, laughing. In addition to recipe development and social-media duties (“I couldn’t do this without a smart phone; I’m often lying on my back, nursing and Tweeting,” she says), Giacobbe—and Taylor, too—visits bars and orchestrates tasting events to educate drinkers about the merits of fresh, locally made beer.  “Beer is temperamental,” she says. “It doesn’t like traveling.”

Additionally, there’s the challenge of convincing restaurateurs to carry Kelso. “Part of the reason that we feel that our beers belong in restaurants is that they’re clean and crisp and flavorful,” she says. “They leave your palate, and don’t compete with the flavors of your food.” Is this an easy sell? Of course not. But a decade ago, neither were inventive, small-batch brews.

“It took a while for craft beer to catch on, but now it has,” Taylor says. “In New York, there’s been a tremendous amount of growth in the last three or four years, but the potential is staggering.”

And Taylor and Giacobbe are eager to help grow New Yorkers’ appreciation for good beer, no matter the long nights or early mornings. “When I get off the train platform, I can smell the beer,” Taylor says. “It’s like, ‘Oh, we’re doing a stout today.’ I love it.”

Photo credit: Michael Harlan Turkell and Francine Daveta. Joshua M. Bernstein is the author of the forthcoming craft-beer book Brewed Awakening, due out from Sterling Publishing this fall.