A Line of Wines You Can Judge By the Cover

The art on Bedell Cellars wine labels literally belongs in the MoMA. 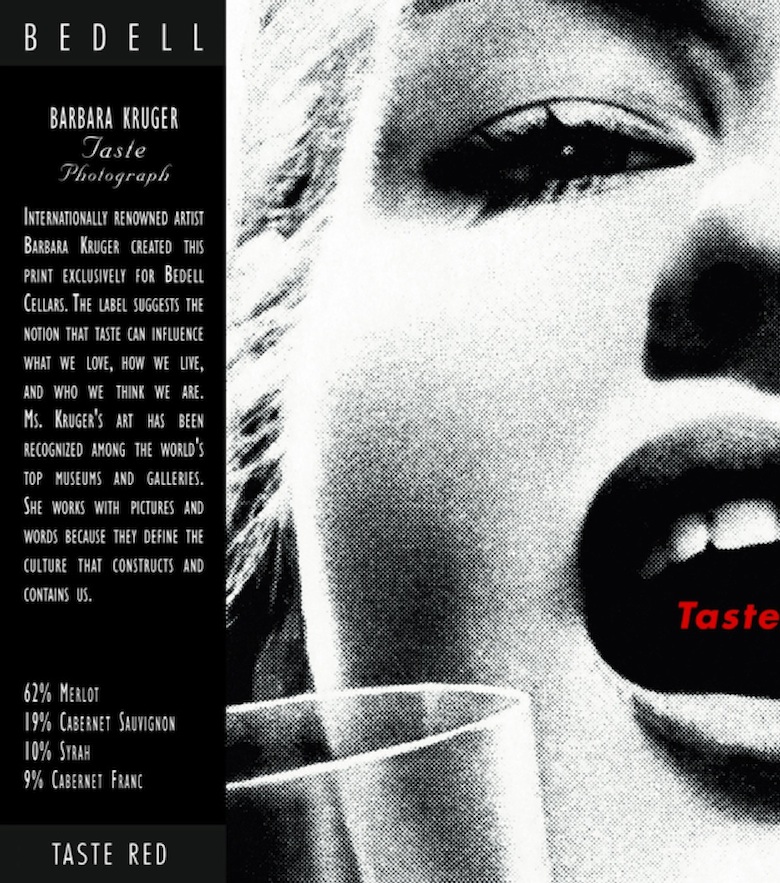 Wine labels are like book covers: Few admit to considering the design—but everyone does. (The 22 members of the Facebook group “I choose wine based solely on a quirky name or label” might be an exception.)

But Bedell vineyard and winery on the East End of Long Island has a line you should be proud to buy for the design. Sure, the bottles’ contents are widely regarded as some of the best in the state—but the art on the labels literally belongs in the MoMA. That’s because they were designed by such famous contemporary artists as Chuck Close, Barbara Kruger, Ross Bleckner, April Gornik, Eric Fischl and Howard Schatz.

“I was very impressed with the region,” he remembers. “The North Folk was a flashback to what Napa and Sonoma were like 20 years before.  And the wine we tasted seemed to have great potential.”

When a North Fork vineyard called Corey Creek became available in 1999, Lynne purchased it and its tasting room, but the fields of vines didn’t include a winery and he wanted to be involved in the entire process, so he kept looking. It soon became apparent that Bedell Cellars was exactly what he wanted.

Kip Bedell, one of the North Fork’s founding winemakers, had purchased a 50-acre potato farm back in 1979 and transformed it into an eponymous winery whose wine first began winning awards in 1986. When Lynne came courting, Kip Bedell said he wasn’t interested in selling—but he underestimated Lynne’s power of persuasion. Within a year, Lynne had convinced him that although he would become the financial owner, the two would be partners and Bedell could continue to be an integral part of the winemaking process.

Lynne purchased Bedell Cellars in 2000, and two years later added a third vineyard, Wells Road, to his properties, bringing his holdings to three vineyards within a two-mile radius (aggregating about 80 acres of planted vines), two tasting rooms (one at Corey Creek and one at Bedell) and Bedell’s vaunted winery.

But if you think that’s impressive, bear in mind that wine is just one of Lynne’s twin hobbies. Described as a modern art fiend, he’s been collecting works of emerging artists for over 30 years.  Since 2003 he’s been on the board of MoMA.

He soon saw a way to blend these two worlds.

“It occurred to me,” Lynne recalls, “that the interests that I have in contemporary art, wine and, ultimately, winemaking have an affinity for each other. It’s really exciting to me to combine those.”

In 2001, he renovated the potato barn at Bedell, originally built in 1919, into a tasting room that showcases a dozen rotating works including photography by Eve Sussman, Lisa Kereszi, Florian Maier-Aichen and Michael Queenland; handmade platinum/palladium prints from Simon Starling; and a hanging platform from Liam Gillick. (A cottage on the property, which dates back to the late 1700s and which is now Lynne’s residence, focuses on younger artists such as Paul Pfeiffer, Jockum Nordstrom, Jason Salavon, Nina Bovasso, Charlotta Westergren, Saul Fletcher and Ellen Gallagher.)

But Lynne went beyond simply displaying fine art at his vineyard: He asked his friends, world-class contemporary artists, to create labels for his wine.

Gornik, a painter, drawer and printmaker of unpeopled landscapes whose work has been exhibited at the Met, Whitney, MoMA and Chelsea’s Danese Gallery, was enthusiastic about the prospect of designing the 2005 Bedell Blanc de Blancs label. “Michael told me he wanted a label for a méthode champenoise wine,” she remembers. “And I tried to come up with some image that would be appropriate to it. I wanted it to have a feeling of float, air, movement, and to recognize gravity and weightlessness in the same image.”

Obviously a “visual person,” Gornik recognizes that she makes choices based on appearances. “I have prejudices about what kinds of wine should have what kind of labels, and since wines often sit out on a table, I want to see something beautiful in a beautiful table setting,” she says. “Bedell has totally updated the great older tradition of Mouton Rothschild artists’ labels in their approach, letting the art be more forward and compelling.”

The label for Bedell’s 2005 Gallery, a unique and richly textured premier blend of 52 percent chardonnay, 32 percent sauvignon blanc and 16 percent Viognier, was taken from a larger original, Falling Birds, 1 (1994) by Bleckner, best known for his large-scale paintings that deal primarily with remembrance and loss. “I liked the idea of one of the birds falling on the bottle, or off the bottle if they had too much wine,” he says of his initial inspiration. Reflecting upon his own wine preference, he confesses, “I usually depend on other people’s far more extensive knowledge. When I’m on my own I mostly eat Italian food and order the house red.”

After Lynne commissioned Close, who achieved fame as a photorealist through his massive-scale portraits, the artist was momentarily stumped upon delivery of a refrigerated container from Bedell containing a cluster of just-harvested grapes. He ultimately took a daguerreotype of the merlot, cabernet sauvignon and petit verdot grapes actually used in the inaugural premier 2005 Musée wine. “I love wine,” Close says, “especially full-bodied and dry red wine with lots of tannin and a long finish—Bordeaux and Italian reds, especially the wines of Umbria, Montefalcos. You can see why I’m working with Michael.”

In March 2008, approximately 75 food and wine writers, restaurateurs, sommeliers and wine dealers gathered at the Modern, Danny Meyer’s restaurant within the MoMA, for the debut of the 2005 Musée. Meyer was happy to host the event—even though he had not yet seen the label nor tasted the wine. “Those factors were far less important than our friendship with Michael, our longstanding respect for Bedell and our complete trust that the wine would show well,” he says. “And of course, the name itself made it a complete natural for the Modern. What we didn’t know until the ‘coming out party’ was just how good the wine itself was!”

While the contents of the wine have earned awards—such as a 91-point rating for the $75 2007 Musée from Wine Spectator, the highest rating the publication had given to a Long Island red wine—and have been poured at many of New York City’s best restaurants, like the Four Seasons, Le Cirque and Wallsé, the bottles have pride of place at the Modern, where Bleckner, Gornik and Close are vaunted in the MoMA.

Belinda Chang, the Modern’s sommelier, admits that the artist labels are what first sparked her interest in Bedell. “I think that a wine label is like a great dress—it doesn’t tell you about the heart and soul of the person (or how good the wine is inside), but it does pique your interest and tell you that the person wearing the dress—or the person who choose the label—has great taste!”

And because the Modern’s wines by the glass are on display both in its wine wall and behind the bar, Chang definitely prefers that they have great-looking labels—though she features Bedell wines because of taste, specifically how beautifully they exemplify the North Fork climate. “It is a unique terroir,” she explains, one that yields wines that go well with food.

Her personal favorites include First Crush, a chardonnay and sauvignon blanc blend for every day, and the Bordeaux-style Musée, which she says holds its own against world-class reds from around the world.

And what is it like to have work on the walls and in the bar? “It is always nice to have one more piece in the MoMA,” Close jokes.