“Hunt, Gather, Cook” Is Not Your Grandpa’s Foraging Guidebook

When we travel, we’re often oblivious to the best place-based tastes, right under our noses. 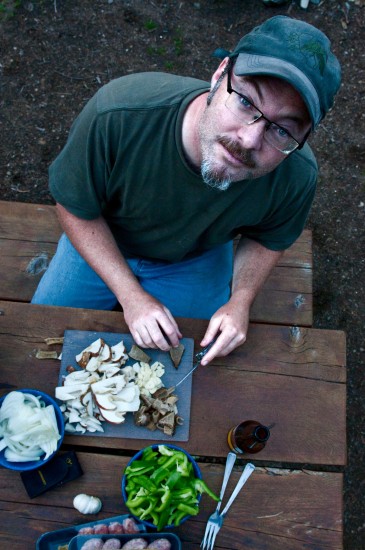 When locavores travel, we seek out farmers markets, u-pick orchards and farm-to-table fanatics. But we’re often oblivious to the best place-based tastes, right under our noses.

“We live in an edible world,” writes Hank Shaw in the introduction to his recently released book, Hunt, Gather, Cook: Finding the Forgotten Feast (Rodale, $25.99).

If you know what to look for, he says, the world is literally your oyster—or your oyster toad (an oyster-eating sea creature that yields some tasty cheek meat.)

Shaw, a journalist with some experience as a restaurant cook, turned his lifelong passion for finding delicious foods into a Beard- nominated, IACP-award-winning blog, Hunter Angler Gardener Cook. He lives in Sacramento, an Eden of rivers, streams, woods and mountains, but insists dwellers of the concrete jungle can also feast on their surroundings. “There are always wild spots within urban and suburban areas,” he says, speaking from experience. When he lived on 80th and York, his city scores included wild onions, and while his book breaks down exotica like pheasant and elk, it also guides you to the likes of pigweed and purslane, which are both sprouting within a block of your front door.

For beginners, Shaw recommends wild strawberries and raspberries, which look like smaller supermarket berries but with bigger flavors. Dandelions are also a good way to ease into gathering wild greens. “Nothing that looks like a dandelion is poisonous,” he says. “At most it could be wild chicory or wild lettuce.” No matter what, you’ll have found a nutritious green, for salad or sauté, with a pleasantly bitter taste.

(Where you’re foraging can be as important as what, explains Shaw. You don’t want to pick dandelions growing on a base of dioxins, with repeated exposure to heavy metals or along a highway. Words to live by.)

This tome is not your grandmother’s foraging guide. Part cookbook, part memoir, and part polemic, it’s an energetic, witty, opinionated appeal to eaters everywhere. Shaw’s guidance is both informative and inspirational. Readers may lose interest in grassfed steak and develop a hankering for foods hauled from babbling brooks or the roaring ocean. Even die-hard pacifists might be tempted to don camouflage and set out in search of small game (squirrel anyone?), large game (deer, antelope, moose), game birds (grouse, quail) or waterfowl (duck, geese and snipe(!)). And not only because catching your dinner makes pastured livestock look like McDonald’s, but because Shaw’s recipes are downright mouthwatering.

Find out for yourself. On September 22, the author will be at Public (210 Elizabeth Street), where chef/owner Brad Farmerie will fuse his Asian-inspired cooking with ingredients sourced from the wilds of New York City and environs. Information and reservations at 212.343.7011.