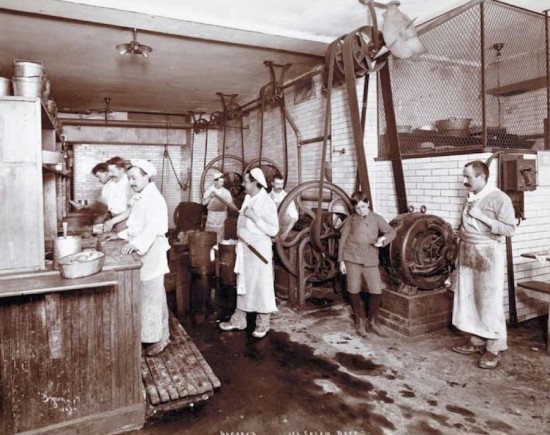 Before commercial refrigeration became widespread in the early 20th century, ice was big business in New York City. During the bitter days of January and February, blocks were harvested from rivers and other freshwater sources outside the city. The industry provided some 20,000 farmers with winter employment, and by the 1880s the city consumed nearly 2 million tons of the ice each year.

To keep it all cold, massive warehouses were built along the banks of the upper Hudson, where it lay in wintery wait before being transported into the city. Most middle- and upper-class New York homes had a deep well in which the large icy blocks were insulated by hay or sawdust.

That’s one of the reasons why, until the invention of the continuous process freezer in 1926, ice cream was a costly luxury. According to William Grimes’ Appetite City, in 1799 a Frenchman launched an “ice house” on Greenwich Street to sell scoops, and in 1808 Ferdinand Palmo, an Italian, started selling ices from a café with gilded columns on the corner of Reade Street and Broadway.

By 1880, Sherry’s was a haute spot for cold confections. One of the city’s finest dining establishments at the time, it was part of a 12-story hotel at Fifth Avenue and 45th Street, and was the site of many lavish dinner parties, including the famous “Billings Horseback Dinner” where 36 guests ate on horseback using custom-made dining trays.

Sherry’s ice cream department, shown here, churned out the frozen delicacy for discerning clientele for more than 20 years, using a system many times more involved than our modern countertop Cuisinarts. (In the background, a Sherry’s staffer scoops ice from a large bucket into a complex contraption where belts and pulleys mechanically churn chilled cream until it thickens.) The restaurant closed its doors in 1919, but the famed proprietor’s name lived on: Through the 1950s the brand was the Cadillac of packaged ice cream—at a time when a pint sold for about 40 cents, Louis Sherry’s cost a dollar.

Photo courtesy of the Museum of the City of New York