Tangled Vine Wine Bar: Where the Bottles Are All Natural, All European and Always Uncommon

Levin is the wine equivalent of a serial monogamist who favors national immersion, one country at a time. 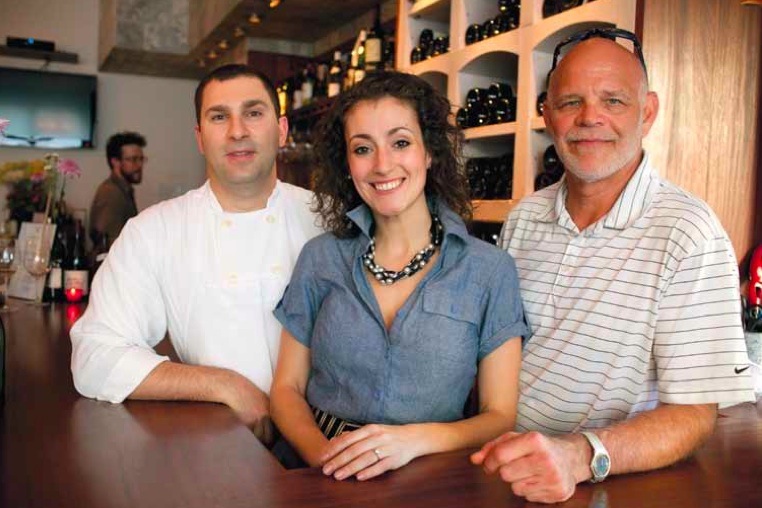 Victoria Levin has a ready defense for every one of your wine attacks.
Come to the Tangled Vine, the Upper West Side wine bar where she is beverage director, and ask for a pinot grigio, America’s insipid white of choice, and she’ll charm you into trying a sterling example of Gavi, the Piedmontese white. Request something in the line of a malbec, the South American reds now in favor, and you may end up sipping a Cahors, a French wine region where malbec was born.

Don’t misunderstand. These Gavi and Cahors buyers do not feel they’ve been played in some vino version of three-card monte. They’ve merely benefited from Levin’s talent for countering an everyday order with an uncommon bottle.

“How do I satisfy a palate and truly satisfy the customer, but give them a little something different?” This is the question Levin gleefully wrestles with every day. More often than not, she pins it to the mat. “There’s a lot of wine being made because there’s a belief that that’s what the consumer wants. It makes me sad when traditional winemakers start changing their ways because they want to sell to a mass market.”

Consider the troubling chardonnay question. Every sommelier and wine director in New York knows that a certain percentage of their clientele has a taste for the buttery chards that flow out of California in vanilla-scented rivers. But the Tangled Vine’s list is Euro-focused. Not a Yankee bottle in sight. What’s more, every wine is from an organic, sustainable or biodynamic producer. Little chance of finding a woody fruit bomb anywhere on Levin’s list. “I struggled with this since we opened,” says Levin, “to find something that was oaky enough for someone who really likes oak with their chardonnay, but not so oaky that I had no interest in
serving it. I’m sensitive to oak.” She who sought did find. “I stumbled upon this,” she says of a Bourgogne Blanc Domaine Ambroise 2009. “The nose is what got me.” Marzipan, brioche, fulsome—an uninteresting nose, it is not. “On the palate, it’s got a hint of honey and tropical fruit, but plenty of toast and olive oil notes. Everyone asking for a California chardonnay has loved it.”

Levin—a brunette, lanky, vaguely Bohemian presence who favors billowy button-down shirts and antique jewelry—finds these missing-puzzle-piece bottles by any means necessary. Importers and distributors now know that she’s open to niche finds and narrow buys. If a wine’s good and available, even in minimal amounts, Levin will listen. Take the Ribera del Duero Viñedos Valderiz. “Guy calls me and says, ‘I have six bottles of ’02. You gotta try it.’ I try it. I’m blown away. I’m shocked by what it is. The ’04 and ’02 are polar opposites. I call him and he says, ‘Now I’m down to four bottles.’ OK, I’ll take it.”

Given this approach, her offerings are constantly in flux—as is the menu. “This keeps everyone on their toes, both staff and patrons,” says David Seigal, the restaurant’s chef. “We have a loyal customer base who are always excited to see new things.”

Before teaming up at Tangled Vine, Seigal and Levin were part of the opening team at the NoHo Spanish restaurant Mercat. It was there that Levin got hooked on Iberian wine. “I drank only Spanish wine. Every time I went to a restaurant, every time I took a bottle of wine to a party, it was Spanish.”

Indeed Levin is the wine equivalent of a serial monogamist who favors national immersion, one country at a time. She began her career in earnest at Alfredo of Rome, the Rockefeller Center mainstay. Confronted with an exclusively Italian list, she dove in headfirst. Following Mercat, she was hired by the Upper West Side wine bar Wine & Roses, where the varied list was mainly French. (Levin comes by this international hopscotch approach honestly. Born in Russia, her family lived in Austria and Italy before finally settling in New York.)

It’s the wines of Spain, however, that have retained the strongest claim on her heart. “I love that Spain has the variety,” she enthuses. “It has the variety of Italy and France, without the price points, without the infamy and notoriety, without the good side or bad side. Very little of it is mass-produced, because it hasn’t gotten the chance to [be].”

Her particular Iberian passion is Priorat, the tiny, mountainous, southwestern area whose reputation has soared in the past decade.

“The wines are big,” she trills. “They’re rich. They have a lot going on, a lot of spice, a lot of earth. They’re not demure in any way. It tastes like the dirt and earth of Priorat. The best ones have acid. If you can get acid in there, you’re talking about something really magical. It goes on and on and on. Suddenly you want food. They make you want to go to Priorat.” (Levin recently got engaged and there has been talk of a honeymoon in Spain.)

Levin, who loves to show off the wines that excite her, orders a bottle of Priorat “Clos Fontá” Mas d’En Gil 2002, a Garnacha- heavy blend. “I love it because it’s big and luscious. It’s got spice and earth and jam and the whole nine. But it’s got, dare I say, a feminine finish. It’s a big masculine wine that’s kind of winking at you.”

The bottle arrives, but it’s the ’01, not the ’02. Levin is even more excited by this (if that’s possible). “Oh, we have the ’01!” she squeals. True to the ways of the Tangled Vine inventory, this is the only bottle of this wine that the restaurant has. “The importer, they called me up and said, ‘Big Name so-and-so restaurant just took their 20 cases of this. I have a couple bottles left over.’ And I’ll take them, gladly. I’ll special it and put it on the list.”

I tasted the ’01, and damned if she wasn’t right. The big, earthy wine did have a feminine finish. It was winking at me. (Don’t worry about the remainder of that ’01 having gone to waste after we tasted it. Levin does this sort of thing all the time. If a customer is willing to commit to two goblets, she will open any bottle on the list.The rest of the wine is then offered by the glass to all takers.)

Levin’s ebullience can be infectious. “She has a well-developed palate and a desire to explore beyond the usual suspects,” says Bruce Kravetz, who owns Tangled Vine with Mark Hausner. “This has broadened my horizons beyond what I have come to enjoy and love to drink.” So, Priorat? “It’s now one of my go-to wines!”

Levin and Kravetz devised Tangled Vine’s debut wine list together, in a collaboration with Evan Spingarn (author of The Ultimate Wine Lover’s Guide). While the list today is more a Levin creation, autocracy is not her style. “I share all my decisions with my staff,” she explains. “If they don’t like it, what’s the point of me putting it on the list? I might think it’s great, but if they don’t think its sellable, so what? I want it to be wines that they’re passionate about.”

The kitchen keeps her thinking as well. Seigal’s menu changes as often as Levin’s wine list, and the question of which came first—the new entrée or the new wine by the glass—is very much a chicken-or-the-egg thing. At one point, Seigal put a steak on the menu because some new meaty reds were crying out for a slab of beef. More recently, some marinated mussels crostini were flying solo—until Levin fixed them up on a blind date with a Txacoli, the dry, high-acid wine from the Basque Country.

“For us, pairing wine is like a game of ping-pong,” says Seigal. “I’ll hit an idea over the net. She’ll hit it back. And so on until one of us slams it home. For me, it is an intellectual exercise, and it heightens the entire food and wine experience.”

Asked to cite an example of this symbiosis, both Seigal and Levin independently point to the same combination: Pork Montadito, crispy pork belly sliders, topped with pickled radish and garlic dijonaise, washed down with the silky, opulent 1992 Zilliken “Saarburger Rausch” Spätlese Riesling. “Riesling and fatty-spicy,” says Levin, simply. “It’s a kind of religious experience.” (I’m not the religious sort, but the two together were a kind of heaven.)
Tangled Vine is the Upper West Side’s first wine bar to focus on organic, sustainable and biodynamic wines. These naturally made wines largely eschew any sort of technological manipulation in the field, including various pesticides, artificial fertilizers, herbicides and chemicals. But the oenophiles who like them tend to care less about that than the wines’ likelihood of honestly expressing their grape varietals and terroirs. That’s why Levin likes them, too. Though she can wax idealistic about specific wines, she is a plain-spoken pragmatist about how the restaurant came to embrace this identity.

“It was a combination of what the neighborhood lacks and what we hoped people wanted and where our love and passion was,” says Levin. “That’s the answer to a lot of things here. We’re very close and tight-knit in our decision-making. We all enjoy sharing. We’re very good about compromising.”

Our tasting and conversation at an end, I prepare to leave. Not possessing much of a sweet tooth, I pass on dessert. But a Semolina Budino, laden with strawberries, lands on the table nonetheless. My questioning glance is answered by a glass of Maculan Torcolato, an Italian sweet wine, set down by the waiter. “It’s one of my favorites,” he explains. “I just had to give you some.” Looks like Levin has a protégé.