Below the kitchens of 508 Greenwich Street, something is brewing. 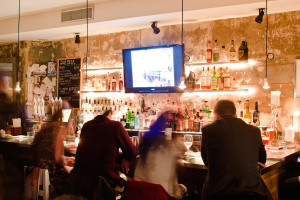 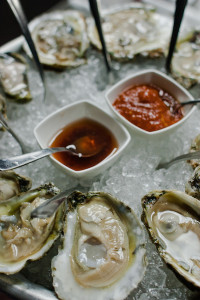 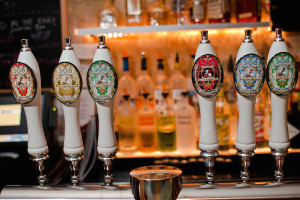 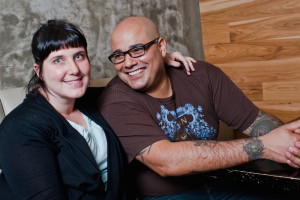 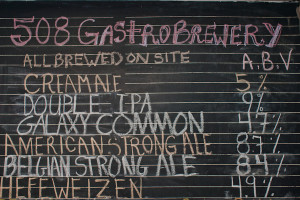 In the narrow basement of his restaurant at 508 Greenwich Street, SoHo chef Anderson Sant’anna De Lima uses his extra workspace for DIY of a different sort than most of his contemporaries. Sure, he cures his own charcuterie and makes his own pasta, but this cook has something else brewing—literally.

The crowded subterranean space two blocks from the Holland Tunnel is piled with bags of barley, hops and wheat, stacked with mash tuns, kettles and small kegs. That’s because Anderson—who owns the five-year-old restaurant with his wife and co-chef, Jennifer Sant’anna Hill—is also the business’s master brewer, making just 10 barrels of house suds each week.

Last June the couple reinvented their modern Mediterranean menu to fully incorporate Anderson’s most micro of microbreweries, and made it official by adding “GastroBrewery” onto the restaurant’s name. As the made-up name conveys, this isn’t a brewpub (there are no hot wings on this menu) or even a gastropub. Anderson (born and raised in Sao Paulo, who cheffed at Il Buco and Aquavit) and Jennifer (a native Manhattanite, who cooked at both Lupa and Del Posto) make goat ragu served over housemade pappardelle; toasts topped with sheep’s milk ricotta, honey, mint oil and lemon zest; or fried wedges of yucca dusted with smoked paprika and dunked in aioli, Anderson’s Brazilian nod to the Spanish standard patatas bravas. All are destined to be paired with great beers, but unlike other modern Manhattan gastropubs like the Breslin or DBGB, every drop of beer here—from a light and sweet Cream Ale to a piney Red Rye IPA to a green apple and herby saison to the seasonal brewed with pumpkin and cinnamon they’re calling the Abobora, or “pumpkin” in Portuguese—is made on the premises.

On any given night, you’ll now find discriminating diners bellying up with beer geeks at the aluminum-topped bar, ordering dollar oysters from both coasts or fried Brazilian croquettes made of sweet potato, chicken and cheese, and washing those back with whatever’s available this week, be it Anderson’s peachy Belgian strong ale or his smoky Mexican-chile-and-Kona-chocolate-spiked “Montezuma Imperial” stout. (Unless they’re one of those diners who buys bottles from the Eurocentric wine list, that is.)

Each tap handle and bottle is emblazoned with its own colorful Art Nouveau label, designed by Anderson and his friend Fabio Soletti. Inspired by an ancient work featuring St. George, the protector of Anderson’s soccer team back home in Brazil, they read “Est a novus die cotidie bibendum.” That’s Anderson’s invented Latin motto, translated from the English by way of Google. “It’s a new day,” it reads, “keep drinking.”

That’s exactly what those who know their brews have been doing at 508. “Home brewers are envious, professionals are impressed,” enthuses John Holl, a journalist who regularly writes about beer and the culture of drinking. “It’s not a brewhouse in the traditional sense; the proof is in the pint,” he says of the lackluster ales served up by old-fashioned brewpubs. “Given the size of the space he’s working in,” continues Holl, “the quality and variety of beers that Anderson is producing is really impressive.”

That’s even more remarkable considering Anderson had never made beer until three years ago, when Jennifer bought him a home-brewing kit. It was probably meant to be a post-shift hobby, but instead he fomented a passion that bubbled up like yeast devouring sugar during secondary fermentation. (“My first batch ever,” laughs Anderson, “was an American Amber Ale I called Chihuahua Fart.”) And while most new DIY projects begin with missteps, funky flavors or outright failures, despite its funny name, says Jennifer, Anderson’s first brew was drinkable from start.

Chihuahua Fart is not on the menu at 508, but about a dozen other beers are. They vary every week: six served on tap, and another half dozen in bottles, their styles dependent on Anderson’s whims. There’s often a light, citrusy, crisp witbier; a heavy-hitting, caramel-kissed ale with a 10 percent ABV and, soon, some “vintage” beers with high alcohol content designed to be aged and mellowed over time. Each is planned in advance, usually months before it’s served, but some recipes might be brewed once and then never offered again. That Montezuma stout, for example, is Anderson’s newest recipe: Think of it as hot chocolate mocha of beers, perfect for winter. Like the classic Guinness, he recommends it with those briney one-buck bivalves he sells at the bar. “The beer is rich and has a velvety texture,” he says, “but isn’t too heavy or filling,”

In case you were wondering, the problem of who’s the boss is easily solved. They keep the peace in the kitchen at 508 by following just one rule: Either of them can veto any dish. Then again, they’ve been co-cheffing for years. In 2007 they met in the kitchen at Landmarc where Anderson was then working: They went out for a drink, 10 weeks later they were married. After a short stint in the Virgin Islands—where they were the only cooks on staff at the restaurant they ran—they came home, opening 508 by the end of the year. Jennifer’s mother had been scouting restaurant locations for them in Manhattan, including the space previously home to Giorgione 508. It had rustic wood walls and a welcoming communal table (all, along with the silver bar-top, still in place), but a final bit of trivia convinced Jennifer it was just the right address: Broadway composer Jonathan Larsen crafted Rent, her all-time favorite musical, right upstairs.

Not surprisingly, it’s rent that might move them out of the far west SoHo space where they’ve flourished (and fermented) for years. Anderson and Jennifer are back on the hunt for space again, doing the scouting themselves for another space in Manhattan that will accommodate a bigger brewhouse and more seating, with plans for a dedicated production brewery in the future.

Until then you can continue to enjoy the city’s only basement brews with a menu designed just for their enjoyment. Try the fig and Serrano–topped grilled flatbreads with the Galaxy Common, for example, the extra-light gnocchi made with celery root and topped with lamb and lavender with the red ale. Some beers even end up in the recipes: They steam clams in their American wheat, spike the house chili with their own brown ale, marinate poblano-kicked short ribs in 508’s red; infuse sausage with a porter or stout; and use the house cream ale in a beer batter for frying. Gastropubs, eat your hearts out.

Nancy Davidson is a Manhattan-based writer who would like to spend more time drinking beer and eating oysters.