Rhum Agricole: Manhattan Mixologists Are Sweet on a Spirit Made From Fresh Sugarcane 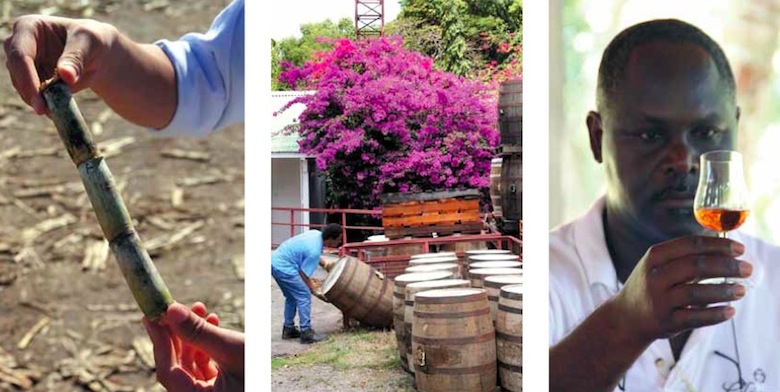 “The fermentation has to be started right away,” Benjamin Mélin- Jones explains over Ti’ Punch at the Richardson, a speakeasy in Williamsburg. “Rhum agricole is produced from fresh sugarcane juice immediately upon harvest—that’s what makes it so delicious.”

He ought to know—and not only because he’s the U.S. representative for two of the best-known brands of rhum agricole, but also because he’s a fourth-generation descendent of Homère Clément, who is credited with inventing the spirit.

Rhum agricole AOC is made only on Martinique, the tiny French island in the West Indies with a tropical climate, volca- nic soil and laid-back lifestyle. But in 2005, it started showing up on a very different island: Manhattan. Bartenders here embraced the spirit as a delicious alternative to traditional rums—albeit for entirely different reasons than those which originally inspired its development 125 years ago.

In the late 1880s, competition from cheap sugar made from beets shook the Caribbean sugarcane-based economy. In 1887, Homère Clément, the mayor of Le François in Martinique and Mélin-Jones’s artisan-minded ancestor, had the revolutionary idea of making fresh sugarcane directly into a new kind of rum. Rather than starting with molasses, he used something he now had in utter abundance: fresh sugarcane. Following the procedures for producing Armagnac, he fermented fresh sugarcane juice into a free-run wine and then distilled it in a single-column copper still. Over a century later, the spirit is still made in much the same way.

Known in French as rhum agricole—to distinguish it from rhumindustrielle, made in large quantities from molasses—the spirit is made throughout the French West Indies including Martinique, Guadeloupe and St. Barts. But the spirit distilled in Martinique, where production first began, has long been regarded as the fin- est, and distillers there sought to have its provenance protected. In 1996, rhum agricole from Martinique received the AOC (appellation d’origine contrôlée) designation in France, subject to rigid standards like those for Cognac and Champagne. Indeed the rhum vieux (aged rum), stored from three to 10 years or more, ranges in color from light amber to translucent mahogany. The flavor can be nutty, spicy, caramel, buttery with a velvet texture, reminiscent of French brandies.

They received a warm welcome. Mélin-Jones says Manhattan bartenders especially took to rhum agricole’s unique, pure flavor and vegetal and floral notes—as did connoisseurs of small-batch bourbons, single malts and fine tequilas. “The Cognac drinker, used to paying $50 or more for a bottle, for the same money can buy aged rhums that are over-delivering in value, with a complex and sophisticated flavor profile,” he says.

At PDT, the sophisticated cocktail bar hidden inside a hot dog joint, owner Jim Meehan has offered a variety of cocktails featuring rhum agricole over the years. One drink included the Girl from Jerez, a riff on the daiquiri that includes Rhum Clément VSOP, Leblon Cachaça, lime juice, Lustau Pedro Ximénez (fortified wine) and St. Elizabeth Allspice Dram, shaken with ice and strained into a chilled coupe, garnished with grated nutmeg.

At Death & Co, one featured rhum agricole cocktail is the Cobra Verde. “The whole idea behind the drink is earth, green, herb,” says bartender Thomas Waugh. “The drink is a variation on the Dia- mondback cocktail, which is a rye whiskey–based drink with apple brandy and yellow chartreuse. I subbed out the rye for a musty and earthy white agricole rhum (Neisson Blanc) and the apple brandy [for] a chamomile-infused rye whiskey. Then instead of using only yellow chartreuse, I [used both] yellow and green, boosting the drink to a whole new level of herbaciousness. All of these flavors play nicely together, but be forewarned: This drink does have a boozy bite.”

One of the finest incarnations is Rhum J.M., named for the Jesuit priest Jean-Marie Martin, who owned the sugar-plantation- turned-rhumerie over a century ago. Today they distill a single- domain rhum agricole AOC, made only from their own sugarcane (think farmstead cheese).

“The result,” explains Jones, who also represents Rhum J.M., “is a rhum agricole that is cream of the crop, coming from a very unique microclimate, growing on the face of the volcano, ultra concentrated. At a higher elevation, there’s a contrast in temperatures between morning and evening and more exposure to tropical sea breezes. It’s very hot and humid and also very lush. There’s usually a cloud cover that blocks the sun a bit and slows down the maturation, and the sugarcane flourishes there.” Production is capped at 1,000 liters, including Blanc (raw, white rum), Paille (gold rum), VSOP (a blend of four- and five-year-old rums) and Millésimé (Vintage 1997 rum), bottled at 10 years (cask strength).

For an overview of different brands and expressions of rhum agricole alongside other rums, you can study at the Brandy Library in Tribeca beginning with a flight called “Rum-running: A tasting of rums, rones [Spanish] and rhums [French],” which consists of 10 Cane Rum (a sugarcane rum that is not rhum agricole), Appleton Extra, Montecristo 12, Barbancourt 15, Clément VSOP and a mystery rum. Their Ti’ Punch is made with La Favorite Blanc, a brand of a white rhum agricole with a clean flavor.

One symbol of the arrival of rhum agricole was the long branchlike sticks with splayed spokes that started showing up in Manhattan bars. The “authentic” swizzle stick—not the plastic mini-straw you may have stirred a cocktail with—also hails from Martinique. A trimmed branch of the sweet-smelling lélé (French slang for “tree”), the baton lélé (as it is called in Martinique) is used to gently stir a cocktail without disturbing the different layers.

At the Beagle (162 Avenue A; 212.228.6900), owner Matthew Piacentini uses the authentic swizzle stick to make his Queimada Swizzle, with rhum agricole, fresh lime juice, orgeat and fresh pineapple, built in a highball glass filled with crushed ice. “Noth- ing else has the subtle yet never-ending flavor of rhum agricole,” says Piacentini. “It lingers and lasts on your palate and does so much of the work for you in a mixed drink.”

Julie Reiner, owner of Lani Kai, the Flatiron Lounge and the Clover Club, loves rhum agricole and has at least one rhum agricole cocktail on the list at every location at any given time. “Niesson is my favorite brand,” she says. “It has a funk to it that really gives the cocktail so much more depth and flavor than a white rum.”

Ingredient-driven eaters might not be surprised that such qualities are found in a spirit that started as a fresh crop, rather than industrial waste.

“Within one hour, the sugarcane is crushed and fermentation is started,” says Mélin-Jones. “This is the way to get all the natural flavors.”