Produce Pushers, Then and Now

The history of produce pushcarts, and their modern incarnation. 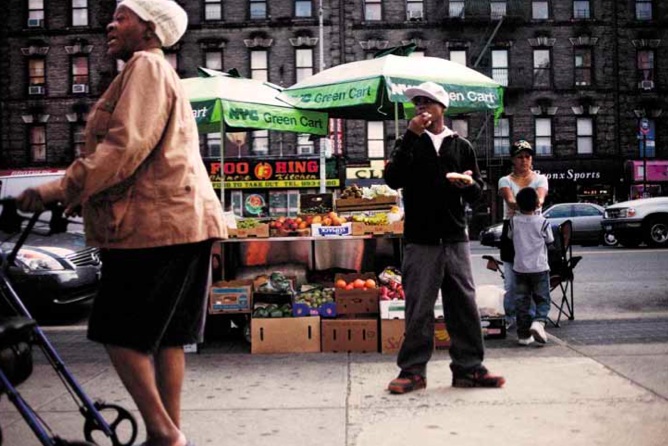 New York may be known as the Big Apple, but for much of its history it was America’s vegetable capital. A century before anyone fretted over food miles, the city was home to some of the most productive farms in the nation—Queens and Brooklyn each grew more vegetables than any other county in the country—and much of that bounty was sold on sidewalks.

Gotham’s ancestral farms have long since been paved over, but a 2008 initiative gave the humble produce pushcart a new lease on life—literally. The city now licenses a special category of mobile produce vendors—called Green Carts—to sell in neighborhoods designated as food deserts. Their offerings aren’t necessarily local, but they’re a welcome crop in the concrete jungle where Funyuns have long since displaced fields of fennel.  An exhibition at the Museum of the City of New York offers a photographic look at the program and the communities it serves.

“A Moveable Feast: Fresh Produce and the NYC Green Cart Program” will be on view through July 10. mcny.org