Food entrepreneurs get a boost from Kickstarter. 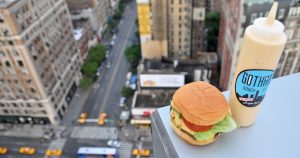 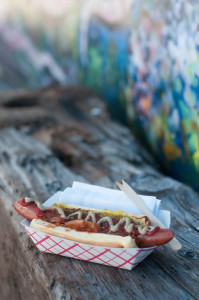 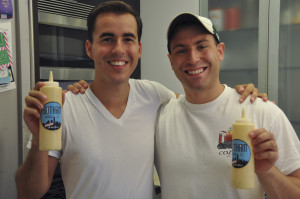 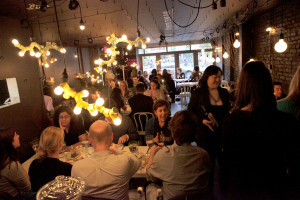 When Dan Maniaci and Piergiorgio Maselli were Boston College students with an appetite for more than knowledge, burgers were a shared obsession. Sliders, Big Macs, Shackburgers, animal-style In-N-Outs—they devoured them all (Maniaci earned the nickname “Tapeworms” after scarfing 11 cheeseburgers in one sitting).

Still, for all the great burgers they could order while out, the two undergrads lamented the pathetic state of patties made at home: overcooked and drowned in ketchup. So they began making their own burger sauce in an effort to resuscitate the home burger experience.

From their tiny dorm kitchen, the pair experimented with recipes and tried them out at tailgate parties until they hit on their Top Secret Burger Sauce— Maselli likens it to “a zesty mayonnaise with some spice.” After graduating in 2010, they moved to New York (“burger nirvana,” says Maniaci) with big plans to launch Gotham Sauce Co.

But, like many would-be food entrepreneurs with little credit history and no collateral, they found the up-front costs—renting a commercial kitchen space, contracting with a manufacturer, securing the right permits—were out of reach. “We didn’t even bother going to a bank,” says Maselli.

In years past, their story would have ended there. Instead, this September, Maniaci and Maselli turned to Kickstarter, a three-year-old company on the Lower East Side whose Web site lets ambitious but underfunded entrepreneurs appeal directly to friends, fans and future customers who believe in their idea. They put together a video pitch explaining their quest “to give the homemade burger a better life” through their secret sauce. And they promised perks to anyone who made a donation—from “a warm and fuzzy feeling” for a $1 contribution, to a bottle of Top Secret Burger Sauce for a $10 pledge, all the way up to a gourmet tailgate party cooked by the two 24-year-old entrepreneurs for a $2,500 pledge.

On September 15, just four days into a monthlong funding campaign, they hit their $5,000 goal—modest seed money that would allow them to start commercial production and shop the product around. But contributions continued to pour in, from friends, family, classmates and random burger lovers. With more than a week to go, 950 people had chipped in a whopping $18,500.

Maselli, a New York native now in law school at St. John’s, called the tremendous response “a vindication” of the venture. He and Maniaci are finalizing arrangements with a co-packer and plan to ship their first products in December. Armed with bottles, they can also begin calling on specialty stores and supermarkets, he adds.

Welcome to the Kickstarter economy.

Founded by Perry Chen, Yancey Strickler and Charles Adler in 2009, Kickstarter has become possibly the largest fund-raising source for the arts—including the culinary kind. It grew out of Chen’s vision that musicians, artists and other creative types could reach out directly to fans and supporters to fund future works. In other words, an inspired crowd could together take the place of a single wealthy patron, banker or angel investor.

Turns out Chen was right: In its short history, Kickstarter has helped raise more than $312 million for over 30,000 projects. The site is attracting $4 million in pledges a week—a rate that surpasses the budget of the National Endowment for the Arts.

Kickstarter-style “crowdfunding” has opened up opportunities for a new wave of entrepreneurs and artists who once were at the mercy of green-eyeshaded bankers, bureaucratic foundations or venture investors looking for the next billion-dollar tech darling. Without Kickstarter and its ilk (it has competition), Gotham Sauce and countless other startups might have never gotten past the fantasy stage, especially in the food business, where creativity is abundant but funding is notoriously scarce.

Kickstarter and services like it “have filled a critical niche matching up small-scale donors with small-scale projects,” says Robert LaValva, president of the New Amsterdam Market, where a number of vendors have harnessed crowdfunding to fire up their pie business or crank out more handcrafted candy. It demonstrates, he adds, that “there are other routes to funding new enterprises than being chained to systems that are unsympathetic to independent businesses and their needs.”

Elizabeth Ü, author of the forthcoming book Raising Dough: The Complete Guide to Financing a Socially Responsible Food Business, says that a successful crowdfunding campaign can demonstrate demand for a product or idea and help an entrepreneur attract professional investors.

Kickstarter is not the only crowdfunding game in town. Indiegogo, a site based in San Francisco but whose CEO maintains an office in SoHo, predates Kickstarter and has funded everything from small business to global causes. Brooklyn-based ioby.com (which stands for “In Our Own Backyard”), helps fund local projects like community gardens and kids’ cooking classes. SmallKnot, also based in Brooklyn, and Lucky Ant, on the Lower East Side, have helped local businesses reach out to customers and supporters to raise capital for expansions or simply to replace rickety old chairs and tables.

Next year, when a new law kicks in that will allow crowdfunding platforms like Kickstarter and its kin to facilitate loans and equity investments instead of just donations, the number of Web sites is expected to explode.

For now, though, Kickstarter has managed to generate the most buzz—helped along by a series of multimillion-dollar campaigns for video games and whiz-bang gadgets: The makers of the Pebble watch, which can display text messages and caller ID from your smartphone, raised more than $10 million. “Kickstarter has gotten into the public view,” says Maselli. In addition to being a funding platform, he sees Kickstarter as a way to market his brand and build relationships with customers.

For cash-strapped food entrepreneurs, it’s like manna from cyberspace. To date, more than 2,350 food-related projects have been floated on Kickstarter—of which 880 have successfully reached their funding goals, for a combined $10 million. (Under Kickstarter’s “all or nothing” rules, a project must reach its funding goal or forfeit the money.)

Kickstarter’s influence has been widely felt, from a community-supported brewery in Garden City, Idaho, to Forage Kitchen, a co-working cook space in San Francisco, and as far away as Seoul, South Korea, where Vatos Urban Tacos kickstarted its Cal-Korean taco joint. But here in New York, Kickstarter—which recently announced plans to move from its Lower East Side offices to a refurbished Greenpoint pencil factory with a rooftop garden—has become an integral part of the food and creative scene.

Last year, Dovetail’s chef John Fraser raised $24,207 from 417 backers to open What Happens When, his innovative downtown pop-up restaurant. It was, in part, an experiment to see if a restaurant could be done on a shoestring, without all the pressure and trappings that comes with big-ticket private investors, and an attempt to engage customers more intimately in the business. Donors received rewards such as their name on the restaurant’s wall or a dinner for two cooked by Fraser.

Scores of lesser-known, but no less ambitious, New Yorkers have turned to Kickstarter. Youngmahn Moon, who owns Del Valle Pizza and Deli on East 33rd Street, raised more than $40,000 to create his Elixirs of Pain line of hot sauces. In Brooklyn, the Diner and Marlow & Sons mini-empire rounded up funds for a community space above the restaurant, and the Brooklyn Grange rooftop farm raised literal seed money.

And in East Harlem, Ayala Donchin, the owner of a wholesale bakery called Evelyn’s Kitchen, recently raised more than $27,000 on Kickstarter to create EK Café, a retail space on the premises. “It’s an absolute game-changer for our business,” she says.

Compared to the eye-popping sums raised by some video games and nerdy gadgets on Kickstarter, the food category has been relatively modest. Just four projects have passed the $100,000 mark (but it’s only a matter of time before some cult-hero chef joins the Kickstarter million-dollar club).

One of those lucky four is Window Farms, which makes an ingenious, apartment-friendly hanging garden system for growing produce with no soil and almost no space. Britta Riley, the Maggie Gyllenhaal-ish visionary behind the Brooklyn-based company, raised money in 2009 for the original concept, an open-source kit that people anyone can use to assemble a hydroponic window farm from used plastic water bottles and fish tank pumps.

Riley soon took a hard look at the plastic and, to create a more environmentally friendly product, went back to the drawing board—and Kickstarter. In December 2011, she raised $250,000 from 2,000 people who preordered the new product, which is sustainably manufactured out of eco-friendly plastic and wire in upstate New York. That was a record on Kickstarter for food-related projects—until July, when San Francisco–based Nomiku pulled in more than half a million for its home sous-vide cooker.

Riley refers to her backers as her “community.” Unlike an impersonal bank loan or single-bottom-line investor, “It’s a very deep relationship. They totally invested in the story and helped vet the idea—they are the ones that made it happen,” she says appreciatively.

Without Kickstarter, she says, she would have had to sell off a huge portion of her company to attract private investors. And then she might have lost control of her mission. One potential investor, for example, wanted her to move manufacturing to China. “The beauty of the model is that the people who are the true believers gave us the support to fuel it and get it going,” says Riley. Now that she has proved her business model, she is better positioned to approach professional investors, she says.

If it sounds too good to be true—and heck, we are talking about free money—there are some hitches. Some entrepreneurs have raised huge sums on Kickstarter, only to be overwhelmed by orders, fall behind or even fail. And donors are not always understanding. When all it takes is a cool video to raise cash, some entrepreneurs may get in over their heads.

“It looks easy, whether you know how to start a business or not,” says Riley. But the Kickstarter process, she says from experience, can be intensive and require lots of hand-holding. Some people who contributed to Window Farms, for example, were upset when the product didn’t arrive right away. She ended up refunding some donations.

Her new Window Farms began shipping to customers in late August. But Riley is still communicating, sometimes daily, with her community. “It’s not just a transaction, it’s a relationship that carries on,” she says.

Maselli of Gotham Sauce Co. admits to being a little apprehensive about the success of his Kickstarter campaign. “We’re excited, but we want to make sure we can fulfill the orders in time,” he says. With 900 backers, and growing—most of whom donated at levels that promised a bottle of sauce—he and Maniaci will have to produce and ship a lot more product than they had initially bargained for. But burger sauce is simpler than, say, a high-tech gadget. Maselli is pretty confident that his co-packer, which does the actual manufacturing and bottling, should be able to handle the extra orders. And the successful Kickstarter campaign should give him and his partner extra cred when they market the product to supermarkets and specialty stores.

In fact, as they neared the end of their monthlong Kickstarter campaign, they issued a challenge to the crowd: If they raise $25,000, they’ll be able expand their product line months ahead of schedule with new goodies such as a Hellfire burger sauce, Smoked Chipotle sauce and a bacon-Cheddar burger seasoning. If you listen closely, you may hear “cha-ching” over the chorus of growling stomachs.