Jono Pandolfi’s work is not your grandmother’s china. 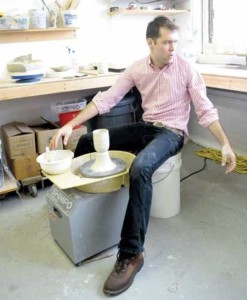 When it comes to dishes, few chefs think outside the box their china came in. But at Danny Meyer’s Union Square Hospitality Group-the team behind Gramercy Tavern, the Modern, and Eleven Madison Park, among others-a bona fide potter makes some of their prettiest plates.

That artiste is designer Jono Pandolfi, whose smooth, modern creations-like the Crate & Barrel Kona series of black ridged stoneware meant to emulate the centrifugal motion of a potter’s wheel-often feature curvaceously sexy lines. These days Pandolfi’s housewares and silverware designs end up in places like Target and Bed Bath & Beyond, but back in 2004 he was teaching hobbyists at Penn South Ceramics, a studio he’d helped launch inside a Chelsea affordable-housing cooperative. Little did he know a big break would soon land his work in the MoMA-sort of.

Pandolfi’s old high school chum William Guidara-they’d played together in a ska band named Hydrant-was working at Union Square Hospitality on the launch of Terrace 5, the café Meyer and company operate in the museum. Guidara, now the general manager at Eleven Madison Park, introduced the as-yet-unknown potter to the top brass, and before you could say “glaze and fire” Pandolfi was custom-creating culinary ceramics. Terrace 5 quickly commissioned squat, modern bud vases for the tables, a design so well received it made it to the shelves of the MoMA Design store.  Soon the chefs at the Modern, Meyer’s upscale restaurant downstairs, were requesting signature service pieces of their own. “Every time we had an idea for something, Jono would make it happen,” reports Guidara, “from chopstick holders to chocolate dishes.”

Word spread. Over at Eleven Madison Park, chef Daniel Humm sought a unique piece on which to present his amusesbouches.  For the light-as-air creations-like cassis sorbet served with lemon meringue and champagne foam-Pandolfi created a porcelain slip-cast pillow. And Gramercy Tavern’s chef, Michael Anthony, collaborated with Pandolfi on multiple pieces including a porcelain egg crate to hold hors d’oeuvres like souffléd potatoes with black olives; a wavy plate with accordion folds for housemade pastrami and pickled chard stems; and a waffled dish whose pockets cradle Maine crab and egg crepes.

They’re beautiful creations, as delicate as the foods they’re made for. Here’s hoping Meyer hires his dishwashers with as much care as his potter.