She dishes up shockingly good soul food at Manna’s, her restaurant in Harlem. 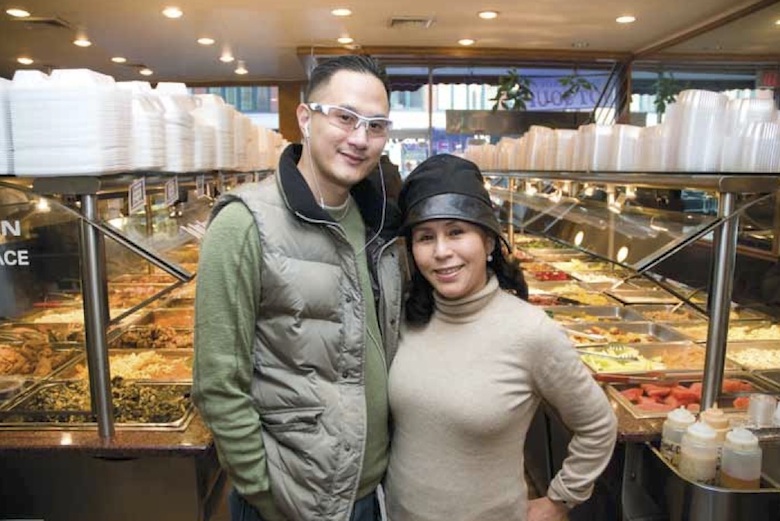 No one can be in two places at once, but Betty Park tries for seven.  That’s how many links there are in her Harlem fast-food chain called Manna’s, all of which offer superb fried chicken, mac and cheese, collard greens and corn bread by the pound. Park–shown above with son Charleton, who helps run the many Manna’s along with his brother Ian–serves super-cheap soul food dished up from a steam table, but her fare is fresh and, shall we say, incongruously delicious. Incongruous because Park’s Southern roots lie well to the east: She’s a native South Korean who followed the lead of other Asian entrepreneurs to open businesses here in northern Manhattan-and hers became far more successful than most.

So how did this Korean cook get her (pork) chops? A guy from North Carolina taught her “really really down South food,”-from pig’s feet to chitterlings. Park says the transition from kimchee to collards didn’t require as much translation as one might expect, owing to her own culture’s embrace of many key soul food ingredients. “We love the calf’s feet, we love the oxtail, pig ears, pig’s tail,” she says of South Korean eating habits, which also include intestines-although those of the cow and not the pig. And don’t forget spare ribs.

Still, getting established in Harlem was hard. Back in 1983, when her family opened a fish market on 125th Street, an altercation at another Korean merchant’s shop heated up into a Harlem boycott of Korean-owned stores. The three-month standoff involved community activists, city officials, the Uptown Chamber of Commerce, Korean merchant associations and the FBI.

Park says the experience schooled her: “If you want to remain in business life in Harlem, you have to work with the community people.” So in 1985, when she opened her original Manna’s-named for the biblical food that fell from the sky-she hired her entire staff from within the ‘hood. The food trumped the competition’s and, 25 years later, she now owns four Manna’s Soul Food and Salad Bar restaurants in Harlem and three more out in Brooklyn.

Park has long since been accepted: The Harlem Business Alliance recently honored her neighborhood commitment and today she’s essentially the doyenne of Harlem’s steam-table circuit. Still she remains modest.

“I don’t say I am a success,” she says. “My father taught me human beings are the same. Anyway, it’s good business sense: If you respect [your customers], they know you; they will feel it.” And, like that biblical manna, they’ll thank heaven for your food, too.