Where a Tower Was Tabled, a Farm Took Root 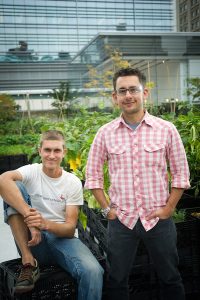 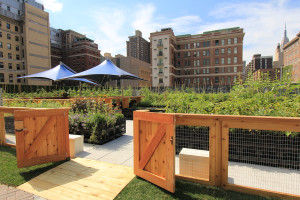 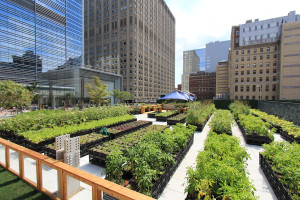 Most farms have enough room to let the lowly cole crop take its time—and take up a whole square foot—over the many months from seed to harvest. But every inch is in demand at Riverpark Farm, because it’s on some of the most expensive land ever used for agriculture: East 29th Street overlooking FDR Drive. Everything picked from this pedigreed Manhattan patch goes straight to Ortuzar’s kitchen next door — he’s the executive chef of the year-and-a-half-old Riverpark, run by ‘wichcraft. Here among the Kips Bay skyscrapers, farmer Zach Pickens grows 250 specialty crops including purple mizuna, bronze fennel, Poona kheera cucumbers, sweet Thai basil, burgundy okra, northeaster beans, white satin carrots, tri-star strawberries, Concord grapes and 10 types of tomatoes, all of which will grace Riverpark’s plates a few feet away.

Ortuzar predicts that Pickens — whose urban farm résumé included Added Value over in Red Hook and the Brooklyn Grange Rooftop Farm in Long Island City before he took over Riverpark Farm last year — will provide 60 to 80 percent of the restaurant’s produce by high season. Yet while the Manhattan real estate market means there’s no space for cabbage, those same macro forces are what brought the micro farm into being last year. A victim of the economic downturn, the site had been slated for a laboratory and office tower until the Great Recession hit in 2008. Sputtering sales put the temporary hold on construction, and the lot became one of 650 derailed construction sites around town — filled with rubble or unfinished excavation, most are public safety disasters just waiting to happen.

So the New York City Department of Buildings founded the Stalled Sites Program, which encourages safer use of these dangerous spaces while they’re between owners. It didn’t take long for the chef to dream up a way to use the empty acreage just outside his kitchen. He got his business partner Jeffrey Zurofsky in on the agricultural idea — to turn life’s lemons into lemon verbena. Zurofsky is a board member of GrowNYC, which runs the city’s Greenmarkets and urban gardening programs, and he recruited executive director Marcel Van Ooyen to help mastermind the project. The team also tapped Michael Grady Robertson, whose urban farming chops yielded abundant harvests at the Queens County Farm Museum. But because the lot is still slated to eventually sprout an office tower, the farm would have to be temporary. So they formed a plan that would be groundbreaking — but not literally. The plants are rooted not in city soil but in makeshift milk-crate planters set atop salvaged wooden pallets, all of which could be set up in a flash — and can be picked up and transported in pieces when construction on that office tower eventually begins. (Though Ortuzar, who says he’ll move the farm to some other location when they finally get the heave-ho, admits that packing all his plants is “going to be a pain.”)

In the meantime, this year’s harvests — the farm was founded last summer, so 2012 is its first full season — will determine whether this portable project can justify its costs to the restaurant: the soil, crates, seeds, not to mention salaries for Pickens and his part-time assistant. After a mild winter and clever cover-cropping, things looked good even early in the season: By March, translucent lids of plastic seafood boxes were deployed as mini-greenhouses, sprouts were taking the phrase “pop up” literally, and flowers from overwintered arugula and tatsoi were already topping a calamari salad. “That’s going to be a watermelon patch,” Ortuzar said, proudly peeling back the protective plastic draped over seedlings of heirloom varieties like “Sugar Baby” and “Moon and Stars.”

As for that lemon verbena, it’s right at home in the city sun, and all summer Ortuzar will let it shine in his mascarpone ravioli with pistachios and golden tomatoes.

In hopes of cultivating more gardeners, Pickens is planning summer workshops on everything from composting to seed saving. “We’re so happy this is here,” said one woman as she walked by the farm with her husband, a doctor at the neighboring NYU Langone Medical Center. “Can I help out? I love to weed!”

Pickens is also helping the restaurant’s kitchen crew find their own green thumbs. “At first the dishwashers would ask, ‘Why do you want me to save coffee grounds, or green stuff from the kitchen?’ ” says Pickens of his early compost requests. Now, he says, “they do it on their own.” Which means Riverpark isn’t just farm to table, but table to farm.

Riverpark Farm is open to the public for tours on Tuesdays at 12:30 p.m. Riverparkfarm.com
Photo credit: Rich Pomerantz