Dan Barber brings cows back to his grandmother’s farm—without the herd mentality. 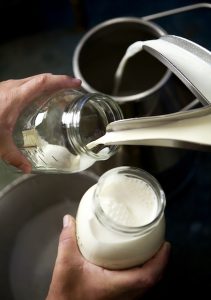 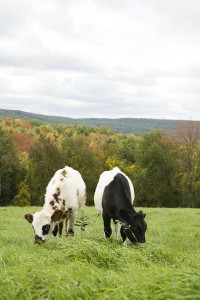 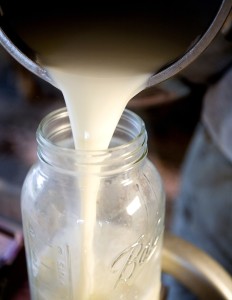 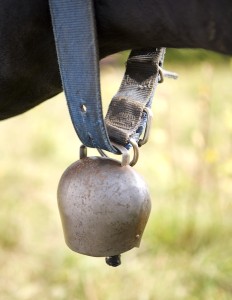 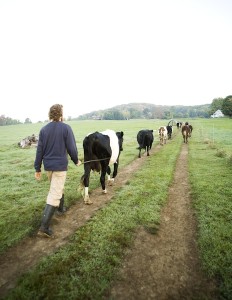 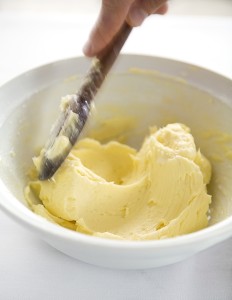 You’d be forgiven for thinking that Blue Hill, the restaurant at the forefront of the farm-to-table revolution, is named for some abstract ideal in the owners’ agrarian imaginations. But while the poetic phrase sounds akin to purple mountain majesties and amber waves of grain, executive chef Dan Barber and his brother and co-owner David called it after a very real place: their  grandmother’s Blue Hill Farm in the Berkshires. Originally built as a dairy in the 1920s, it was the young brothers’ annual summer escape from the Upper East Side. “We’d get up there Friday night and burst out the door Saturday at 7:00 a.m.,” David laughed recently.

The boys helped with the hay—which would become winter feed for the Black Angus then dotting the pastures, as well as for an area dairy—stacking it into the wagon, loading it into the second story of the barn and trying to avoid occasional clocks in the head with a 50-pound bale. David happily recalls waking at 4:00 a.m. to help with the neighbors’ morning milking.

Years later, the brothers would name their Greenwich Village restaurant after the formative farm—and base their work on ideas that had been instilled there. But while the Barbers were busy cooking up a locavore revolution, they noticed that, at Blue Hill Farm, the grass had been greener on the other side of time. “We remembered the really thick, green, healthy, luscious stuff we used to walk through in the summers,” says David. Back then the fields had been naturally fertilized by grazing cattle. “After 10 years of just cutting it for hay,” says David, “it was scraggly.”

They brought the kitchen crew up now and then to sow seeds and pull weeds, but between running one restaurant and hatching another, they had plenty on their plates. “The cooks all came up a couple times to tend to it,” says David, “but one big planting in the spring does not a farm make.”

So in 2004—the same year they opened Blue Hill at Stone Barns on the groundbreaking farm and education center in Westchester, with my husband as the livestock manager—the brothers approached a young farmer from whom they’d been buying pork and poultry and proposed he help restore the Massachusetts pastures to their prime.

“I started with three milking cows,” says Sean Stanton, “and for the past six years we’ve been expanding.” Stanton also raises pigs, chickens and some spectacular produce, but the farm’s tiny dairy operation takes pride of place: This summer he’ll be milking 19 head. More animals leave more nutrients on the fields, which makes for better grass, and in turn, better milk. The herd is hardly homogenous Holsteins. Instead of that black-and-white industry standard, Stanton raises a diverse lineup of breeds that produce fewer gallons but are prized for their cream content.

“It’s hard to believe it’s milk, it comes out so thick,” raves David, whose refrigerator would make a calf jealous. Over the winter he tastes the flavors of aging hay. By May, when the cows go back on grass, it gets a pleasant funk—“I call it the Beaujolais.” And come fall it’s “like good Organic Valley milk, but even richer, like a milkshake. You pour that on the kids’ cereal, it’s like paint, like Benjamin Moore.”

But you needn’t be a breakfasting Barber to taste the cream of the family’s crop. Dan offers the curds and whey at Blue Hill nightly, featuring them in everything from yogurt to ice cream and tiny shakes served with petits fours. The kitchen even produces ricotta three times each evening, rather than serve an hour-old batch. But the pièce de résistance is something Dan calls single-udder butter. When it comes to mixing milk, even the most traditional dairies take a herd mentality, so each pint is an animalian average. But Chef Barber, in pursuit of the sublime, requested otherwise.

“I wanted to taste the flavor from each breed, so I asked if Sean could milk them separately and not mix them, so we could experience the personalities.” Personalities? Yes, he repeats, insisting. Take Annabelle, a headstrong beast. “It takes three times as long for her butter to come together. Sunshine is a dopey follower, her butter’s the easiest to make.” And Dan swears cream from the most stubborn cows sometimes just can’t be coaxed into becoming butter at all.

There are Blue Hill cheeses in the works, but the task at hand is, as Dan puts it, “building the grass ecology to produce better tasting milk and celebrating the uniqueness of these breeds.” “I love tasting the changes,” he says, “depending on the cow, the rain, which field they’re in. It isn’t just seasonal, it’s literally a daily experience.”