His kitchen is stocked with a full Indian spice shelf. 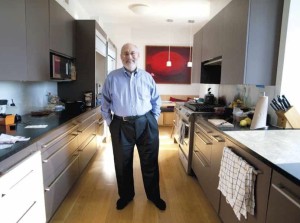 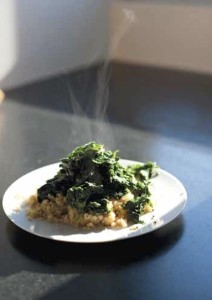 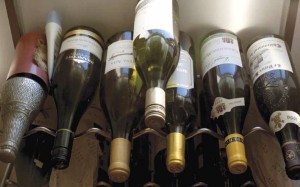 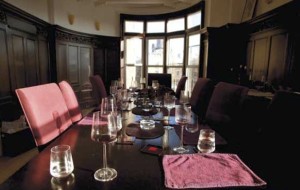 As far as economists go, Joseph Stiglitz is something of a rock star.  Before accepting a post at Columbia University, where he is also founder and head of the Initiative for Policy Dialogue, he chaired President Bill Clinton’s Council of Economic Advisors, was chief economist at the World Bank and won the Nobel Prize in Economics for his work showing that markets are often inefficient. He recently produced a report for French President Nicolas Sarkozy that calls for a rethinking of economic indicators that emphasize output (think GDP) over well-being and quality of life.

Debunking the prevailing wisdom on globalization and unfettered capitalism has been a theme in Stiglitz’s work-and one that seems vindicated in the wake of the global economic crisis (which he warned of). His latest book, Free Fall, published in January by Norton, provides provocative fodder for the national debate about the crisis.

Stiglitz and his wife, Anya, a former journalist who also teaches at Columbia, live in a sprawling apartment overlooking the Hudson, where they often entertain distinguished guests, including heads-of-state along with the occasional Secret Service detail.  Recent dinner guests have included George Soros, Robert Wilson and Jorge Castañeda.

Stiglitz recently took time from his schedule to talk with us while Anya whipped up an impromptu lunch of couscous topped with spinach and mustard seeds.

Joseph Stiglitz: I like to have my students over. I teach about two or three classes a year, and Anya teaches two. The students really enjoy it. It’s a way of talking to them informally and getting to know them a little better.  We also like to have my staff over-my staff at Columbia and the Initiative for Policy Dialogue, an NGO I run-a couple of times a year. And maybe once, twice or four times a year we’ll have a president or finance minister that wants to sit down. Quite often, in our travels, they will have entertained us in their more lavish accommodations. So we sort of enjoy having them over.  Anya Stiglitz: And then we get apple pie from Soutine Bakery because Joe likes to serve American food-it’s our signature. It’s really delicious apple pie. We like to serve American seafood, steak, roast beef … things like that.

JS: Anya does most of the cooking. I’ve been aspiring to do more, um, but every time I feel the strong urge I face some deadline or other and Anya rushes into the breach.

I do two or three things good. Every Thanksgiving I try to make a chestnut puree. I lived for six years in England, so I got a little bit into some of the English staples, like chestnuts. And I like marinating, I like the flavors it gives. So, marinated shish kebab and things like that.

AS: Breakfast is Go Lean with three newspapers. Joe has to sit there with the paper for a half hour. I actually cleaned out the pile before you came.

JS: I’ve just finished a book called Free Fall, and, as you might expect, it’s about the crisis: the causes, what we should have done, what we did do and what are the consequences of not doing what we should have done.  The basic thrust is that the crisis was predictable and was predicted, and largely the result of deregulation and problems of corporate governance in the banking system. What we’ve done in the bailout is make things worse.  It’s cost us a great deal and hasn’t really worked very effectively. And we shouldn’t be surprised, if we have the same guys who created the problem in charge of fixing them.

JS: A strand of my work has been very focused on globalization. I spend a lot of time abroad, and, in terms of eating, I tend to be very eclectic. One of the interesting things is the spread of so much good cooking around the world.  AS: Joe will basically try everything. If there’s, like, ostrich on the menu, he’s got to order it.

Biting the hand that feeds

JS: In China, we went to a restaurant that specialized in … what was it again, Honey? Not the tarantula … what are those spiders called? The things that are really poisonous?

JS: You had a meal that was scorpion wine and then scorpion pizza, or a Chinese version of pizza, scorpion this and scorpion that. The pièce de résistance at the end of the meal was live scorpions in alcohol-sort of drunk, I think.  They tell you how many of these live scorpions some distinguished president who had been there before had eaten, so there’s a lot of pressure to eat them. And eating with chopsticks is even more difficult, because you hold it, and as you eat it, it’s trying to come around and bite you. So you have to bite off the tail and then eat the rest. It was very good, but more of an adventure.

JS: When we were in New Zealand for the Wild Food Festival, they had some amazing foods. They had a tree trunk with live grubs eating the tree…. They were really fresh. They would split the tree trunk and you could have a really fresh grub.  AS: Huhu grubs, pronouced koo-koo.

AS: We recently ate at Noma in Copenhagen, about three weeks ago. It’s like a Danish El Bulli. One of the dishes was just spinach with local berries. But very creative. We booked months in advance. But someone canceled our table. We showed up and they kept us in the waiting room, but they finally got us a table.

The faulty theory of weight loss

JS: We eat very healthy. The frustration is the fact that, in spite all this healthy eating, I find it difficult to lose weight. The theory is I should be losing weight eating this, but …

Pour me some chocolate

JS: I love Diet Chocolate Fudge Soda … do you know that one?

AS: Joe’s from Indiana. Diet Black Cherry is kind of our substitute when we can’t get it.

Thanks for the memories

AS: We used to go to Café des Artistes (which closed last August after more than 90 years in business). We had our second date there, so we’re in the same position as all of those people who don’t have an anniversary place anymore.

Something borrowed, something fried

AS: We had our wedding at Grand Sichuan on 24th Street and Ninth Avenue. My parents had gotten married at City Hall and had Chinese afterwards, and I wanted to recreate that. I called up in advance to book the reservation, but I got the feeling I wasn’t really getting through to them. So I went there in person to see if they had my wedding reservation, and they sort of scratched their chins and looked around and were totally perplexed, and then said, “Oh, yeah.” It’s a total greasy spoon Chinese restaurant, with a TV in the corner. And the guy went up to the TV, and in the corner, crumpled up into a tiny little square, was my reservation for 80 people.

So, my parents had this friend who has written a lot about Chinatown…. I called him up and we sort of did it the right way: We came in and had dinner, met the manager, made the reservation.  But even on the wedding day, when we got there, they hadn’t given us the whole restaurant, they just put up a screen. So it was our wedding and everyone else. There’s always a long line, and sometimes on the line I’ll say to people, “Well, I had my wedding here,” and they’ll be shocked!

JS: I love gadgets, but I’ve had my enthusiasm for them dampened.  We have an ice cream maker, and I had a bread maker but we didn’t use it. I like making espresso coffee, and I like making fresh grapefruit juice in the morning. There’s a toaster oven. There are lots of gadgets, but one of the problems of New York apartment living is that you just don’t have space to have every gadget.

JS: My mother was very organized. Every Thursday we had liver, I think Monday was veal. She would shop for everything once a week and put it in the freezer. A very organized life, and very predictable. It was very Midwestern. Her favorite cookbook was The Joy of Cooking. She also did a lot of baking; I suppose that helped contribute to a sweet tooth, which I’ve been trying to tame.  They put me on a buttermilk diet. It was healthy, but they were trying to get me to lose weight. So it’s been a problem for years.  They said I was “husky.”

AS: People for some reason always give us jam and honey as a present, so we have a vast amount of jam from all sorts of people: grapefruit marmalade made by my mom, mango chutney, some of this stuff we bought in Italy. This is honey that one of our Japanese friends mailed over. And we’ve got some great honey that we got in Ethiopia. It was a huge container, then we had to decant it. It was like an enormous plastic vat, so we wrapped it in our dirty laundry and brought it home.

JS: We were in Assam and took beautiful walks through tea plantations, and we were also in Darjeeling and got really into the very big differences in teas. They take tea very seriously in Darjeeling.  I like Darjeeling tea. I also like the oolong teas.

AS: We’re very, very, very into Indian food, and therefore go to Lexington Avenue all the time to buy stuff. So this is the Indian spice shelf.

JS: These are from the farmers market. They’re quite good … a little local community. But I have a question, Anya. There are green beans in it. Did you put them in? Or did they come there? I didn’t know if it was an exuberance on the part of the pickle maker.