A Picnic with the Staff at Fatty Crab

Zak Pelaccio knows how to party. 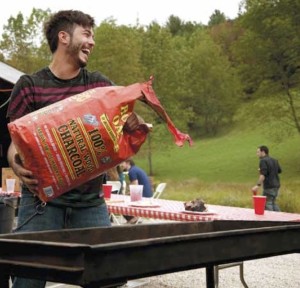 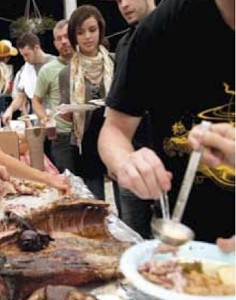 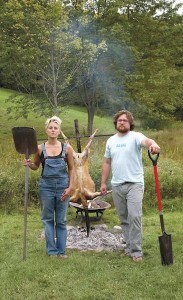 “That’s Chef’s blower,” was shouted in warning, and the day took a turn toward delicious when someone turned on the air mattress blower and began stoking the flames beneath a crucified goat. Zak Pelaccio knows how to party. For Fatty Fest, an annual upstate bash for the staffs of Fatty Crab and Cabrito, held at the Pelaccio country residence in Old Chatham, New York, he put up a carnal feast.

In addition to the goat, there was a spit-roasted lamb and 220 pounds of grilled heritage pig. The fixings were Fatty-inspired: plenty of white bread, pickles, chili sauce, salsa, a huge pot of potatoes cooked crab-boil style along with heaping plates of radishes, tomatoes, onions and herbs fresh from the property’s garden. The pièce de résistance was a box of peaches so perfectly ripe you had to eat them bent over.

“It’s invite-only and you’re on the list, baby,” crooned David Schuttenberg, chef of Cabrito, as he bounced his little daughter in the property’s pool.  Early in the afternoon it was a family affair, with Zak’s son, Hudson, cannonballing into the water.  Later came hearty cheers as a magnum of prosecco made its way around the deck and the back-flip competition began.

Of course no picnic would be complete without a friendly match of football. It was uptown vs.  downtown and the audience was full of girlfriends with neon toenails and gladiator sandals. There was well water on the sidelines but its sulphur notes drove players to a bottle of Jim Beam sitting innocently beneath a tree. The game ended with the cry:

“That’s why you signed the waiver.”

The sun went down, the DJ set up and a crowd gathered around the lamb. There was more feasting, then more fire, a few tunes and, if you were lucky, a glass of Jori’s punch.