Paul Nasrani always wanted to go into business. But it wasn’t the ice-cream business he had in mind. 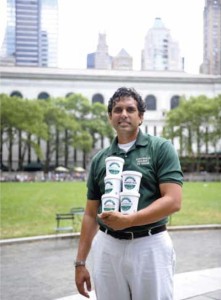 Paul Nasrani always wanted to go into business. But it wasn’t the ice-cream business he had in mind. “I wanted to be chief financial officer of a large company,” he says. “I wanted to be on the cover of Business Week.”

Until one day in 2003, when he found himself, in a suit and tie, rolling a washing-machine-sized ice-cream freezer up Vanderbilt Avenue.

Nasrani’s ice-cream obsession had begun two years earlier. He was CFO of a legal staffing business that nearly went under during the recession that followed 9/11. “The stress level was huge,” he says. “I needed to relax.” So he bought a little Krups ice-cream maker—the kind with an insert you put in the freezer—and started experimenting.

His Turtle Bay apartment was so small that he had to lay out his ingredients on the Murphy bed. Nonetheless, he made batch after batch, taking careful notes (as an accountant, he was a record-keeping kind of guy) on the ingredients and method he used for each.

As his obsession grew, he started visiting every place he could that made ice cream and quizzing the owner. He spent an entire weekend on the Jersey shore hitting nearly 20 ice-cream shops. He attended Penn State’s weeklong ice cream course intended for pros.  And he spent a lot of time hanging around a frozen custard shop in Grand Central called Custard Beach. He even began pricing the commercial ice-cream makers (known as batch freezers), which can make five to 10 gallons at a time. But the $25,000 price was way too steep for him. Besides, where—in his minuscule apartment—could he put it? And what on earth would he do with it?

Then came that winter’s day in 2003, when he stopped by Custard Beach and found himself in the middle of a foreclosure auction. One of the items: a batch freezer. Nasrani had never been in an auction, and he didn’t even know if the freezer worked. But he did know how much a new one cost, so when the auctioneer started the bidding below $2,000, he jumped in. Which is how he found himself wheeling the freezer up the sidewalk Vanderbilt, and trying to figure out how to get into the ice-cream business.

His first try was a seasonal stand in the Adirondacks (he’d go back to keeping books in the winter). When he decided to go fulltime, the economic development folks in Kingston, New York, introduced him to dairy farmer Rick Boice, who had a room of unused ice-cream equipment and all the milk Nasrani could use.

Four years later, Adirondack Creamery ice cream is in over 100 stores in the tri-state area, including Whole Foods and Fairway. Last year the company finally turned a profit, and Nasrani began taking a salary, though he still supplements his income with occasional accounting gigs. But however successful the company becomes, Nasrani says he will never ship his ice cream more than 150 miles.

“The closer to the cow you are,” he says, “the better it’s going to taste.”