From Hops, a Different Kind of Brew 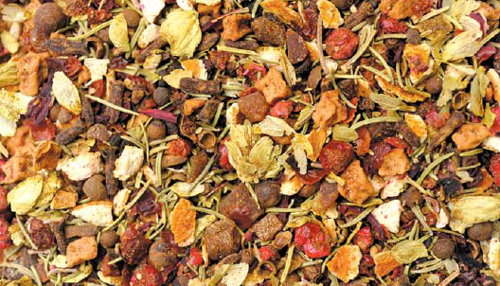 SerendipiTea, the typography-happy tea company, is already well known in cocktail circles. Mixologists intent on creating innovative, tea-based libations have toyed with its various brews for years.  But now beer mavens may want to take an interest.

Last year the 16-year-old outfit (which is based out in Manhasset but began life in an Upper West Side walk-up) released Winter Solstice, a new entry in its 250-plus lineup of hand-batched teas. The blend is ripe with apricots, red currants, rosemary and cloves, but the concoction’s secret ingredient is New York State–grown hops.

“I had been thinking about a solstice blend for a few years,” said cofounder and president Linda Villano. “The practice of fermenting fruits—and preparing beer and wine for the long winters ahead—seemed a natural reason for using hops.”

SerendipiTea sourced its hops for the blend—which, its name notwithstanding, is a welcome companion in any season—from Foothill Farms, run by Kate and Larry Fisher in tiny Munnsville, a hamlet just east of Syracuse. In the 1880s, New York State led the national hops harvest, producing 60 million pounds of the buds per year. A blight, followed by Prohibition, wiped out the industry, but a few farmers have replanted.

“I’m not a beer drinker, so hops are completely unfamiliar to me,” admits Villano. “Kate was extremely patient, taking time to answer loads of questions. She sent samples, then answered more questions. It’s always really exciting to bring in a new ingredient.”

The final selection: a blend of Willamette hops and Cascade hops, both aromatic U.S. hybrids. Villano describes the nose on the Winter Solstice as a bit astringent but floral, and says it “adds a very subtle maltiness to the cup.”

So is a hoppy cup a new thing in the tea world? Villano doesn’t know of any others, but notes that there are tea-infused beers. The combination presents a seamless way to transition from teatime to happy hour.