They’re the first New York distillery to bring the storied phoenix back from the ashes. 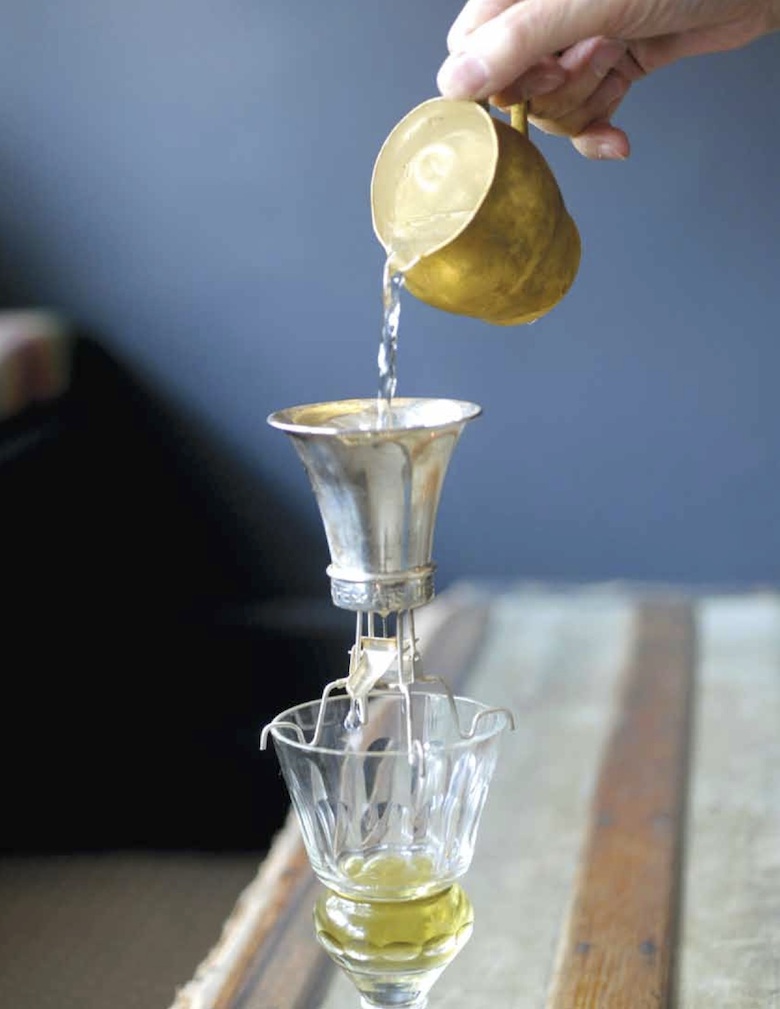 As far as venturing into distilled spirits goes, absinthe is no gateway.  In the evolution of drinking, the green fairy falls somewhere after grappa, before Cognac. But for Cheryl Lins, owner and sole employee of Delaware Phoenix Distillery, it was the first liquor she fell for.

“I was pretty much a nondrinker,” admits Lins, who distills New York’s first homegrown absinthe. “All of a sudden, I got hooked on the green fairy.”

Lins became obsessed with the anise-flavored spirit after reading about it in a 2006 New Yorker article. It was still illegal here, so she began ordering bottles from Europe. But with a decent bottle running as high as $100, absinthe falls squarely into the luxury category; as an artist and sometime farmhand, she quickly found the indulgence beyond her means. Lins decided that the only way she could afford it was to make her own.

Her first experiments were disastrous, resulting in vile, acrid firewater—wormwood is one of the bitterest substances on earth—but soon friends were declaring it good enough to pay for.  When the substance became legal in 2007, Delaware Phoenix Distillery was born. Today Lins turns out some 200 bottles per month at her tiny one-woman facility up in Walton, New York, where she does all the distilling and bottling, even label-making herself.

Of course, becoming a legal distiller is no easy feat—especially when your product is trying to shed an illicit reputation. The spirit’s ability to induce psychedelic episodes has been dismissed as myth, but many craft distillers still have to dispel notions of the elixir as a mind-altering substance.

“I never was interested in the drug-like experience,” says Lins.  “For me, [the appeal] was the technical challenge. It’s a little science project. It’s alchemy. But I have to constantly address that issue.  People are fascinated by that [psychedelic] aspect of it, in spite of all the scientific evidence to the contrary.”

Lins researched historical formulas but developed her own recipes using fresh local herbs. For each batch she adds grand wormwood, anise and fennel to a neutral grain spirit. The distillate emerges clear from her tiny copper pot still, then a second infusion of Roman wormwood, hyssop and lemon balm adds flavor and a green tint. Walton Waters, her more traditional incarnation, boasts a grassy flavor thanks to lemon thyme, while violets impart flowery notes to Meadow of Love, her more mellow, prettier elixir. Both are poured in select bars throughout the borough, including Louis 649 and Summit Bar in the East Village, Vyne in the West Village and Ward III in Tribeca. You can also buy a bottle at Chambers Street Wines or Astor Wines & Spirits, where they retail for about $80. But a little can go a long way.

“There’s a lot of opportunity for mixology with absinthe—that’s exactly how it was used prior to Prohibition,” explains Lins.  “Because absinthe is bottled at such high proof, there’s an impression that it’s supposed to be served like that. A lot of people know that you’re supposed to add water, but they don’t know how much.  Traditionally, absinthe was served much closer to the strength of wine. To get that strength out of my absinthes, you have to add between three and five parts water to one part absinthe.”

Adding water, either using an absinthe drip or simply slow pouring by hand, is called “louching,” and turns the clear emerald liquid a milky sea-green. A sugar cube, sometimes added to sweeten more bitter absinthes, is unnecessary with Lins’s. The anise provides enough natural sweetness; the rest of the experience is purely aromatic. At Tipsy Parson you can enjoy the spirit properly louched using an old-fashioned absinthe drip.

At Ward III, Delaware Phoenix is the only absinthe in stock.  One of the three proprietors, Michael J. Neff, says he discovered it at the tail end of a private party held at the bar. He found an empty bottle laying around, upended the trace contents into his mouth, and when a drop hit his tongue, he was instantly converted.

“It’s delicious. Beautifully crafted,” he says. “It explodes in the mouth. And I mean that in a wonderful way.”

Lins’s absinthes—the Walton Waters, in particular—are mostly used for cocktails at his bar, where they make an excellent Sazerac, one of the more traditional absinthe cocktails.

John Rankin, the spirits buyer at Chambers Street Wines, agrees that the cocktail renaissance has helped drive absinthe consumption, but finds Lins’s offerings so much brighter and less bitter than other incarnations of the spirit that they are easy to sip with water, even for people who might think themselves averse to anise.

“They’re fantastic absinthes,” he says of her two bottlings. “We try to buy from small distilleries making exciting things. Now that absinthe is being made legally in America, we’re finding that the quality is high. And Delaware Phoenix is the poster child of that.”