The recent Harlem explosion tore through two buildings across the street from the Urban Garden Center and leveled the UGC’s greenhouse. They’re not backing down, though — in fact, they’re already back in business. 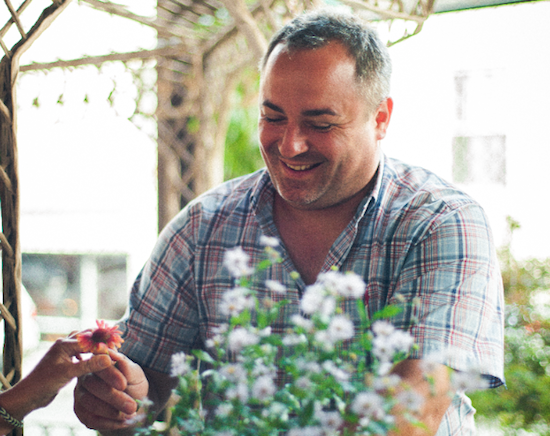 The day after Edible Manhattan interviewed Urban Garden Center proprietor Dimitri Gatanas for our feature on the East Harlem operation, explosions tore through two buildings across the street and leveled the center’s greenhouse. Edible proceeded with the story in hopes that the Gatanas family’s moxy and resilience would see their garden center continuing its offerings this spring. We got the chance to follow up with them in late April.

Edible Manhattan: Hi, how are you all holding up?
Dimitri Gatanas: We’re good, we’re good. It’s really encouraging when you’ve got an amazing clientele, neighbors, people like you — a whole network of people. It’s made this the most, I don’t want to say “easy,” but it’s made it possible to get this far.

EM: Can you describe what’s happened with the Urban Garden Center [UGC] since the explosion?
DG: It was kind of crazy to think how all this happened. Basically, it was about 25 days of not being able to access the retail portion of the property. We were able to get into the place sometime around the first or second, and we were able to actually be in business by the fifth.

EM: How did it look when you arrived on April 1?
DG: The place was literally just littered with all this debris: garden supplies, lost property, books, pottery, our greenhouse was dilapidated, we had to get in there and shore it up. Start the process of rebuilding it. We basically found everything in shambles.

EM: So between April 1 and 5, what did you all have to do?
DG: Cleaning, that was the biggest part. It was really hectic. While we were doing all this cleaning, there were still people continuing the investigation. There’s been a lot of construction on the street.

We had to figure out where we were. Put our fence back together — we had our fence ripped apart in three different places on the property — that was our first priority, to secure the place. Then we had a lot of meetings with city agencies — the landlord, the police, everybody — the whole process of getting us back on track here. A lot of people wanted to help.

But we just cleaned it up, put it all on the street, got the garbage picked up, put the fence up. We literally started with a pile of some soil and some fresh plants and supplies and started the business all over. It reminded me of the day we started in 2011. But the difference was we had all these wonderful people coming in every single day. Just to reminisce and give us words of encouragement, and frankly people were just so happy to have us open again.

EM: The fundraiser worked out nicely for you so you were able to make your investments?
DG: That amount of money really made things happen faster, so that was really, really helpful. The fact that we actually had to repurchase inventory, that was a big issue. And then all the plants that we had that we kept alive over the winter from last year, all of them died because we weren’t able to even get in to water them. We barely had enough access to the chickens, but we were able to feed them.

EM: Are you okay there now?
DG: Yeah, you know what, it’s funny, but all the construction guys, all the people, they’re coming in and they’re just looking around at the plants. They can’t get over it. Every single day I get about two, three compliments from the various people that have never been to the neighborhood before. And they see what we’re doing here, they just want to encourage us to continue. They got to see it happen right in front of their eyes. Plants, flowers and light in a place that was lifeless a month ago. It was really encouraging.

EM: How is the community doing after such hardship?
DG: Well, it’s kind of crazy. I mean, it’s brought a lot of us together that maybe wouldn’t have been together. It’s almost like overnight we became like equal brothers and sisters in this community. It’s amazing really.

EM: You’ve mentioned that you’ll have a memorial on your site?
DG: I think we have a responsibility to do that. We have a big beam that was left from the building right on the middle of our property that we want to move to a certain spot to be the memorial garden. It’s a beautiful beam, a really meticulously decorated piece of metal, and the back side of it has these big holes, which you could plant things in. So we’re trying to figure out how to do that so that it looks tasteful. We don’t want to be insensitive, we want to do this right. It’s something that we’re working on, and I think it’s going to come to fruition once we get the greenhouse done.

EM: Will the investigation affect your operations this summer?
DG: No, no, we’re doing our first pig roast on Saturday, May 3, from 12 to 5. We’re hoping to do weekly events going forward. A Korean-style roast pig…people are going to love it. We’re calling it: “El Boar-rio presents Harlem Seoul.”