USA Pavilion: How the U.S. Represents at This Year’s Food-Themed World’s Fair

The USA Pavilion has chosen the theme “American Food 2.0: United to Feed the Planet” to represent the innovation happening within the American food system. 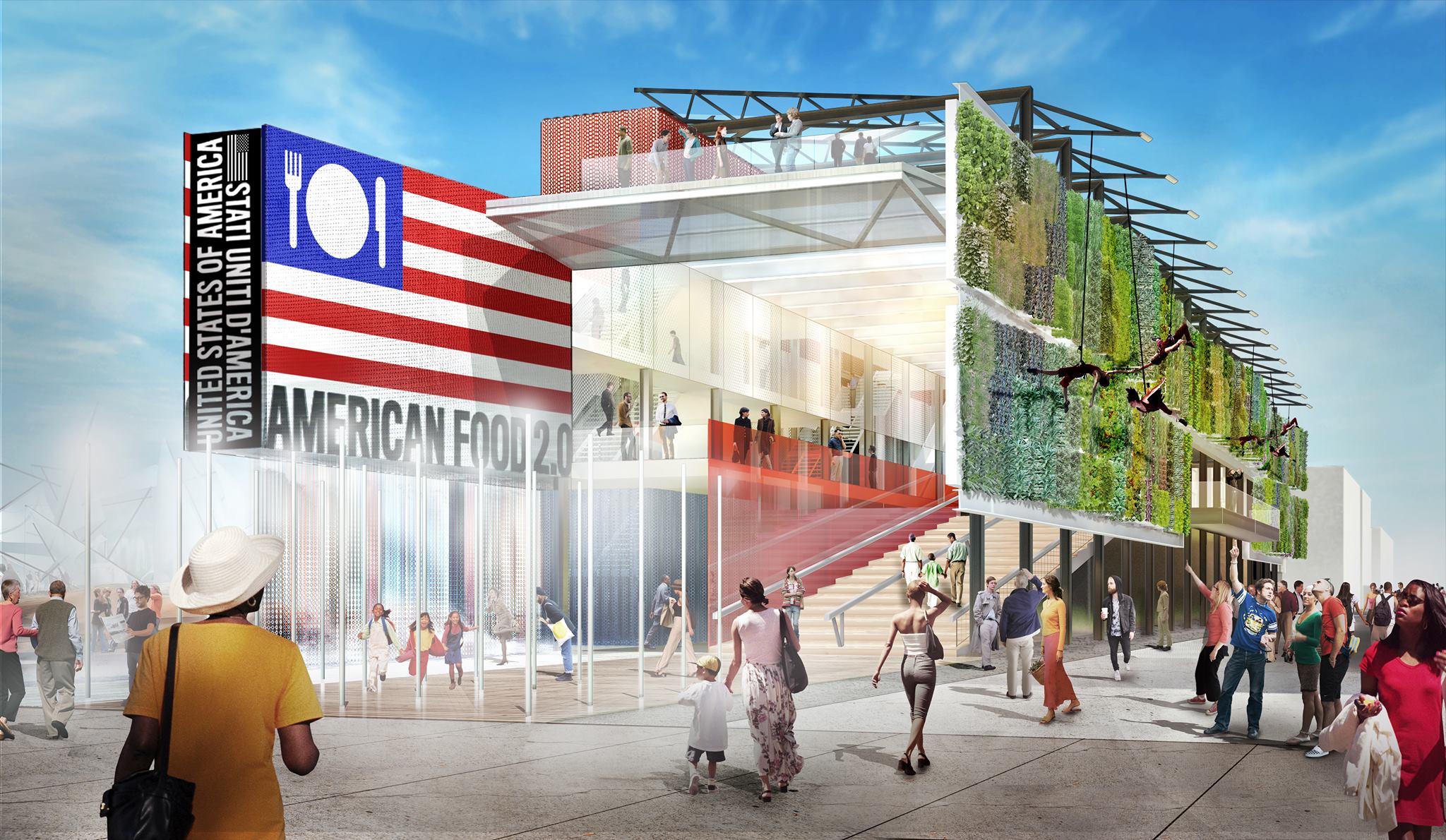 Editor’s note: In anticipation of our upcoming Innovation issue, we asked our writer Sari Kamin — who also worked on the USA Pavilion team — to interview fellow crew member Mitchell Davis. Both Kamin and Davis host their own separate Heritage Radio Network shows, entitled Taste Matters and The Morning After. Keep an eye out for a profile of HRN in our soon-to-be-released issue, too.

Mitchell Davis is the executive vice president of the James Beard Foundation and the chief creative officer of the USA Pavilion at the Expo Milano 2015: the next World’s Fair (yes, those still exist) that begins May 1 in Milan, Italy.

This year’s theme is “Feeding the Planet, Energy for Life,” and over 140 countries will participate with their own pavilions that showcase their unique vision for food security as the population grows to a projected nine billion by the year 2015. The USA Pavilion has chosen the theme “American Food 2.0: United to Feed the Planet” to represent the innovation happening within the American food system as we work toward producing food in a way that is sustainable and equitable.

I spoke with Davis to learn about some of the central philosophies behind about the USA Pavilion:

EM: What does the idea “1 in 9 Billion” represent?
MD: It is a really important idea because it means that each of us has a responsibility for the collective. It allows us to think about how the little decisions we make — what we have for breakfast, what we throw away, etc. — have an impact. Each one of us has an effect on the whole world and the future. Oftentimes with food system challenges people are overwhelmed with the magnitude of the problem. Global impact and change really can be as simple as people considering what they have for breakfast. When it comes to food security there’s an “it’s up to them” attitude, but in fact, it’s up to us.

EM: What does the USA pavilion want to convey in terms of how and what Americans eat ?
MD: Americans eat a whole bunch of different ways, and while we may be reduced to hamburgers and hot dogs, which are delicious, the way we eat is as diverse as where we live and where we are from. The surprise will be that visitors will see food from their country, Italy or other, incorporated into American food. That is what makes our food so wonderful and gives it so much potential as a cuisine.

EM: What do you think the takeaway will be from visitors of the USA Pavilion?
MD: I don’t think I want people to leave knowing what American food is. That will take some time, but the quality and diversity is important to get across as a takeaway. It is important for people to realize that America takes food seriously. Even though we don’t have long traditions because we’re a new country, we are great students and enthusiastic practitioners, and people all over the country are discovering the value of craftsmanship that these much older cultures have discovered over centuries. We are evolving with a certain mindfulness and thoughtfulness that is going to be a real surprise to people.

EM: America is such a diverse country in terms of cuisines and foodways. How was this dealt with in terms of conveying what American food is?
MD: It’s actually central to what we are expressing — we are not expressing a codified idea of American food. That doesn’t exist.

EM: What were the biggest challenges?
MD: One of the most unexpected challenges we had and continue to have is convincing others that food was an important enough topic. The notion that you could use food as a filter in which to view innovation, economy, industry development, etc. took come serious convincing of many of our partners. In Europe, there may be a more serious understanding of food, and for those of us who work in the food world, we take for granted that food can be used as a lens to examine so many different aspects of our culture. I do think we’ve made great strides. It is a project of the State Department and Secretary John Kerry, but a lot of people didn’t see a place for themselves or their companies because of the topic.

EM: Localism is such a deeply ingrained part of Italian food culture. How is American presenting its much newer but no less exciting foray into localized eating?
MD: A lot of people are trying to figure out what the role of localism is in the big picture of global food security. Italy has an understanding of localism to an extent that is maybe more so than any other country. Italy is the size of California, but you get tomatoes that come from a town 20 miles away and it’s not considered local.

In Italy, local food is profoundly tied to identity, and in the United States we are just beginning to dabble in local foods.

The size of the United States makes it difficult — if identity and food were tied in the same way that they are in France and Italy, we would have a different kind of country, but our scale makes it challenging.

Learning about local food is a metaphor for learning about the importance of agriculture. It’s a way for us to remember that food comes from the land and is not just a commodity. It’s important for us to remember that local food is also about economies and trying to retain a regionalized infrastructure in some of our new changing approach to development. The new paradigm of feeding the future — working with communities, empowering women and farmers — is really about localizing a food system.

Mayor De Blasio is coming to Milan in October with his family to visit the Expo. He’s going to be signing the Pact on Urban Nutrition, which is something that Milan is working on in light of the theme of Expo Milano.

Additionally, many New York–based artisans are being featured in the USA Pavilion, such as Liddabit Sweets, Raaka Chocolate and Garrett Oliver of Brooklyn Brewery.

EM: What is American food?
MD: We don’t have a definitive food culture here because it changes all the time — we tear it down and put it up again.

American food is really tied to entrepreneurship. It is almost driven by the market the way our lives are, and one thing we’re trying to do is balance it with agriculture. The stories we hear here are about successful businesses. I think, right now, American food is about cultivating a good business.

EM: What will you miss most about New York while you’re in Milan?
MD: Bagels and Chinese food.

American food is very popular in Italy right now. There are lots of hamburgers and a burgeoning barbecue scene that has developed a following. California Bakery is actually really good. It’s like having an Italian café in New York that is better than just okay, but I didn’t come here for a bagel.