Adjacent to the Union Square Greenmarket, Project Farmhouse will be a permanent and public community space. 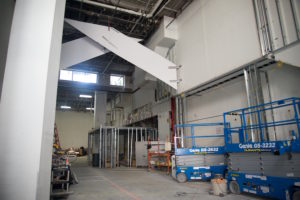 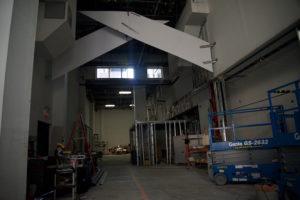 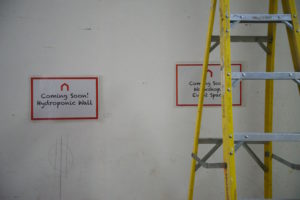 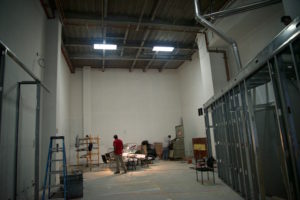 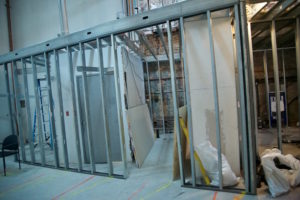 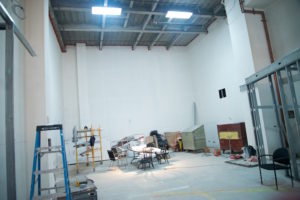 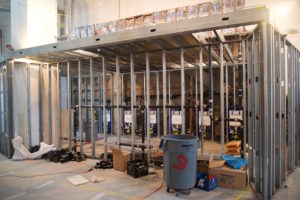 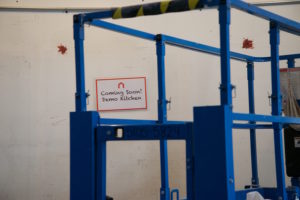 As GrowNYC celebrates the 40th anniversary of its Greenmarkets this year, 2016 will also mark the opening of its first permanent, public home. Project Farmhouse, an educational and community space managed by GrowNYC, is set to open in Hyatt Union Square’s ground floor by November.

The space itself is owned by Hyatt Union Square, who had previously set it aside for community purposes until they could find a nonprofit willing to use it for a sustainability-related project, according to Marcel Van Ooyen, GrowNYC’s executive director. The Hyatt is covering about half of the construction costs (mostly the essential structure and systems), and GrowNYC is paying for the other half.

Chura recently gave us a tour of the space that’s designed by Brooklyn-based firm ORE and still under construction. Its defining features, however, are already starting to take shape. The hanging acoustic baffles are visible and run the length of the 3,500-square-foot space, mirroring the shape of the entryway arch. Signs pointing out the demo kitchen’s future location can be found toward the front, and the skeleton of the hydroponic wall is already in place.

That hydroponic wall, custom designed by Newark-based City-Hydroponics, has the potential to be the space’s visual centerpiece. According to Chura, the magenta LED lights are designed to maximize the growing potential of plants on the wall, while also serving as a uniquely attractive backdrop for dinners.

“I think the growing wall is going to be super interesting. It’s the first time I’ve seen a hydroponic vertical wall that’s actually on a rotating system,” says Van Ooyen. “Instead of static trays where the plants are getting lit, they’re gonna be rolling through on a conveyor system, so if you’re sitting there having dinner, you’re gonna be bathed in this light of plants growing as they slowly rotate through the hydroponic glass wall, and that way, it improves the efficiency of the amount of plants getting the light for that system.”

Great to see the arch we designed with @interbrand for @grownyc is up in Union Square! Stop by the greenmarket to hear how they're transforming NYC

Recycled materials are being used throughout the space, down to the smallest detail. Tables, countertops, wall paneling and the entryway arch are all made of salvaged wood, with a lot of it being donated from Brooklyn-based M. Fine Lumber. The acoustic baffles are also made of recycled material, while the lighting and plumbing systems are both aggressively designed to minimize energy and water usage, respectively.

As for those dinners, Project Farmhouse is aiming to host educational dinners with local chefs, as well as private dinners for corporations and nonprofits, and the event rental costs are expected to be an important part of the project’s financial viability. In addition to providing chefs and restaurateurs with the ability to host dinners associated with the city’s long-standing sustainability program, Project Farmhouse will offer an alternative to hosting pop-up dinners at restaurants and the exceedingly high costs that come with doing so.

“Most restaurateurs, if they want to have a farm dinner or some sort of theme-related corporate dinner, it’s often difficult to do something over 20 people, because most restaurants don’t have a private room for that, and they have to shut down the entire restaurant to do events for the nonprofits like ourselves and other nonprofits,” says Van Ooyen. “So we’ll be able to have them host their events there at a more reasonable rate and allow them to use it as a vehicle to raise money for their nonprofit, and ours as well.”

But GrowNYC’s mission of improving New Yorkers’ quality of life through sustainability is still the key impetus for Project Farmhouse’s construction. Van Ooyen estimates that around 6,000 kids take tours of the Greenmarkets each year, and Project Farmhouse will allow those kinds of educational programs to continue with greater depth into the winter months. Project Farmhouse’s sample schedule includes events like recycling volunteer training, a stop ’n’ swap and a Sunday afternoon window for food box pickups. Van Ooyen also expressed excitement about hosting farmer training, School Garden Initiative training and the idea of bringing back old GrowNYC Educated Eater programs like canning demos and soil workshops.

“We do all this great work out in the communities, and our markets are put up and then taken down at the end of the day, but we’ve never really had a permanent space for us to both carry on our programming of educating New Yorkers about eating better, where food comes from and sustainability, as well as a place for us to hold events and showcase all of the wonderful work my hardworking staff at GrowNYC do each day,” adds Van Ooyen.

As of right now, GrowNYC has raised about $607,000 out of their funding goal of $800,000. Naming rights to various parts of the space, including the hydroponic wall and entryway arch, are available for purchase.