Under the Tracks and Off the Grid, Urban Garden Center Rises Up

Since opening in East Harlem two years ago, the Urban Garden Center has been the go-to spot for urban gardeners and hobbyists. Beyond that, it’s a community hub serving education, entertainment and fresh eats along the way. 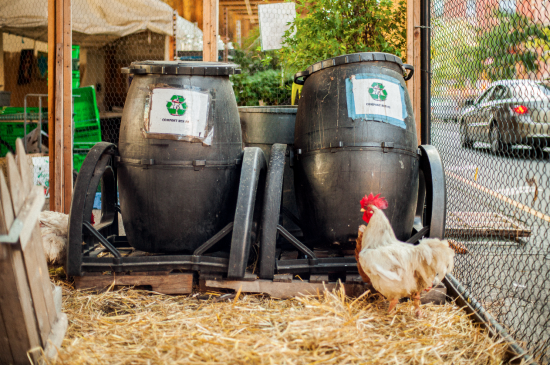 Their roost was rocked. The chickens were spared serious fallout from the blasts, as were two employees who were tending them when the explosion hit, leveling the greenhouse.

The March day before explosions shook East Harlem, Dimitri Gatanas, proprietor of the Urban Garden Center on Park Avenue from 116th to 118th, said, “everybody is subject to things, and obstacles and destruction and happiness and good things. We just have to learn how to deal with them, that’s it.”

The following day, Manhattan’s largest garden center had a front-row seat to destruction; it was shut down for weeks while used as a staging area for rescue and then investigation. But the two-year-old center indeed learned to deal with it. At press time the much-more-than-a-store was about to reopen and, by the time you’re reading this, will again be serving the community in more ways than one.

Since opening in East Harlem two years ago, the Urban Garden Center (UGC) has been an oasis in the food desert. The go-to spot for urban gardening pros, hobbyists and beginners from across the boroughs, it’s a scarce resource for everything from seeds and soil to plants and planters. Beyond that, it’s a community hub serving education, entertainment and fresh eats along the way.

“It’s a really great setup,” says Zach Pickens, the urban farmer who grows produce at Riverpark Farm in Murray Hill and whose Rooftop Ready seeds, which he custom selects for urban agriculture, are sold at UGC. “There’s no other garden store like that in New York City.”

This patch of green in the concrete vasts is a place of big dreams, big plans and enjoys heartfelt support from their customer base and community.

Gatanas, who transplanted the flourishing garden center here two years ago, has built something that feels as mission driven as a nonprofit. A place so dedicated to public health, they give away free compost, help with school gardens, host a CSA and support the latest revival of the historic La Marqueta. “They’re dug in deep in that community,” says Pickens. “It’s a great example of a business with more of a focus than just money.”

Situated in perhaps the unlikeliest location ever for a plant nursery, UGC occupies a noisy two-block stretch beneath the Metro-North Railroad’s Harlem line, where their off-the-grid existence includes no electricity, no running water and little to no natural light. As Gatanas puts it, “If I can do this, you can grow a veggie in your apartment.” 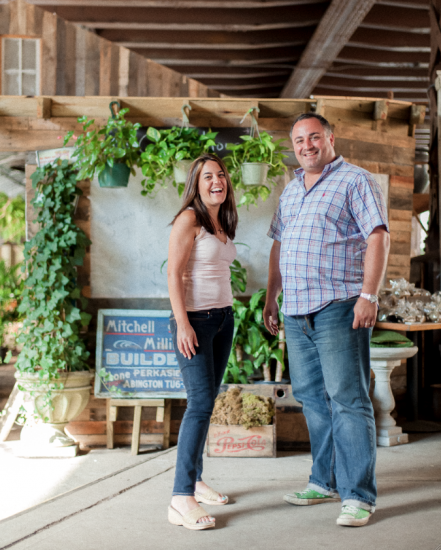 The 41-year-old Gatanas takes after his Greek grandfather-namesake in alt use of real estate. In the late 1960s, his “Pappou” set up Dimitri’s Garden Center on a rooftop on 86th and Lex that thrived for nearly two decades until leaky ceilings led to a loss of the landlord’s love. Gatanas, who worked in real estate post-college, only fell into the gardening business when his grandparents were struggling to secure property rights at the East Harlem location in the late ’90s. Then after an uncle working there walked out and took off for Greece, Gatanas temporarily covered for him. Only the uncle never came back, and Gatanas eventually went on to run the show. After the deaths of his grandparents, his immediate family came on board, first his mother, then brother Alex heading up carpentry, followed by his wife, Sara, who runs the kids garden programs, and finally his father in 2003.

After a stint in the Bronx, the newly named UGC arrived at its current East Harlem location in 2011, and they were just hitting their stride on March 12 when the massive gas explosion destroyed two buildings directly across the street, taking the lives of eight neighbors and leveling the center’s greenhouse.

At a time of year when the center would ordinarily be receiving truckloads of plants, soil and garden supplies, the location beneath the tracks instead became a receiving ground for emergency vehicles and the center of the rescue, cleanup and investigation efforts. “We’re here for the community,” Gatanas said in response to the unfolding chaos. “If this is the form it takes, so be it. We lost some friends today.”

And the community is there for UGC, too. A fund-raiser for the center was at the $15,000 mark at the time of this story. “I can’t get over how many people are calling us to try to help,” said Gatanas.

Gatanas has long been the one helping them. “I feel like East Harlem’s forgotten about. It’s pretty sad. And that’s why we do what we do,” says Gatanas.

What they do includes continued contributions to community well-being: They’re the pickup site for Corbin Hill Food Project, a Harlem-based organization that provides fresh local produce and nutrition workshops to underserved urban neighborhoods. Steve Ritz of the Green Bronx Machine comes with his living green wall to shows kids that they don’t need a yard to grow a garden. And every spring they host school field trips, when 20 to 40 kids at a time will come in for seed planting workshops. Some classes just pop by unannounced to feed the chickens and help with the compost.

The chickens roost in a red and white coop to the north of the greenhouse and were spared serious fallout from the blasts, as were two employees who arrived that morning to find a “donated” rooster in a bag thrown into the coop and entangled in the pigeon netting above. When the explosion took place, the employees were busy freeing the rooster instead of working in the now-leveled greenhouse.

When the chickens aren’t saving lives and educating schoolchildren, they’re contributing to compost. UGC mixes community food scraps with chicken and landscaping waste to produce 100 gallons of compost a month that’s offered to the community for free. While you can’t load up by the truck, “if you can walk or bike the stuff out and carry it, it’s all yours,” says Gatanas. 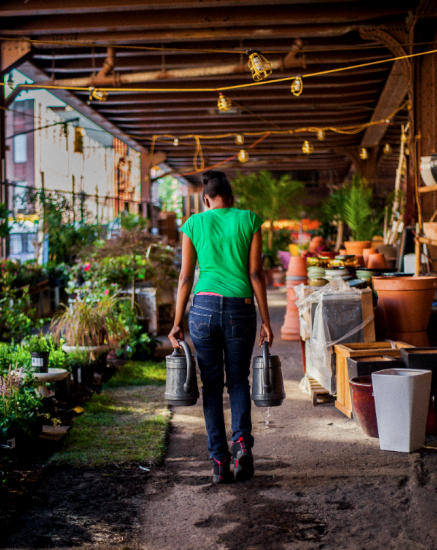 Off the grid. In perhaps the unlikeliest location ever for a plant nursery, UGC occupies a noisy two-block stretch under metro-North’s Harlem line, a space with no electricity, no running water and little natural light. Says Gatanas, “If I can do this, you can grow a veggie in your apartment.”

His approach to giving discarded items new life comes across as part survivalist and part Velveteen Rabbit. Looking around, everything that meets the eye was diverted from the dumpster: Planters of upcycled pallets or landscape remnants, the interior walls (of what was the greenhouse) lined with tree trimmings, the claw-footed bathtub and greenhouse brick floor donations from locals, while a mirrored disco ball amplifies sunshine in the low-light greenhouse.

That same thinking extends to Gatanas’s love of so-called “weeds,” wild plants that support his overall use-what-you’ve got philosophy. “Everything we do here promotes the concept that you could survive with stuff [that grows] on the sidewalk, like purslane,” he says. His own parents and grandparents lived on wild greens such as purslane, dandelion, chicory and amaranth in WWII.

His many dreams for expansion include an aquaponic vertical farm growing these survivalist sidewalk greens. In fact, his ambitions run grand as he imagines the center being to green living what Eataly is for Italian cuisine. For now, UGC has a full lineup of adult and kids workshops planned for 2014, on garden design, natural pest control with hot peppers and a possible micro-brewing class with Celeste Beatty from Harlem Brewing Co. 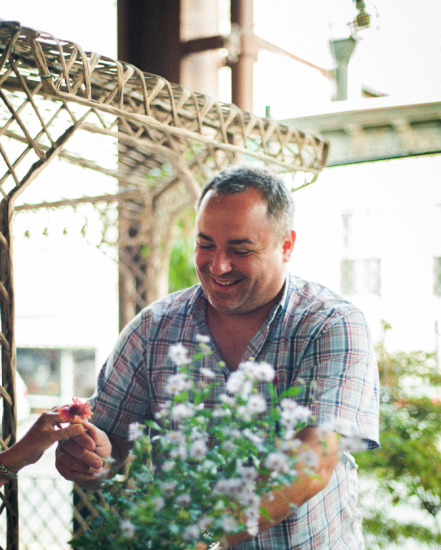 Last October their Harvest Fest pork roast, “El Boar-rio,” drew a thousand people. For $10, attendees received coleslaw, corn on the cob, chorizo, local pork, all washed down with Sugar Hill beer; latecomers had Flea Marqueta’s 30 vendors to choose from. A hundred free trees were given away that day with New York Restoration Project. Gatanas says, “We’re going to do that again.”

It’s about community outreach and drawing people in. “We’re like a band of brothers,” he says. “When we all support each other that’s a spark in the right direction.”