Urban gardeners found themselves in that position in 2001, when a drought inspired the folks at GrowNYC to help them harvest a vital new crop: rain. 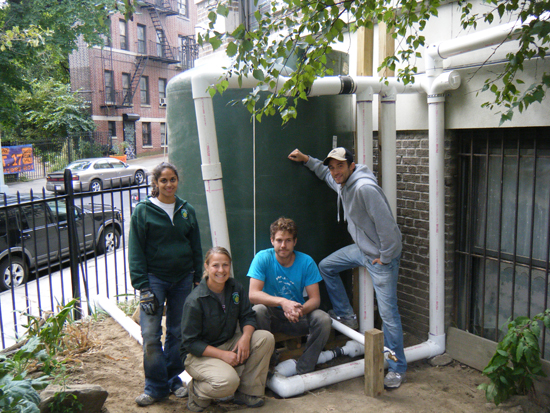 When it comes to rainfall, Manhattan gardeners have it good. The city can expect 50 inches annually, spread pretty evenly throughout the year. But averages are worthless when the sun is beating down on your tomato plants and it hasn’t rained in eight days.

Urban gardeners found themselves in that position in 2001, when a drought inspired the folks at GrowNYC to help them harvest a vital new crop: rain. Since then, they’ve had a hand in establishing about 90 “rainwater-capture systems” across the boroughs. GrowNYC’s two-hour rainwater workshops (you can catch one April 6 at the Queens Botanical Garden) are designed for backyard and community gardeners alike and point people in the right direction, which might mean a 50-gallon repurposed olive barrel catching runoff from a garden shed or a 1,000-gallon tank positioned under the downspout of an apartment building. And if there is no existing structure, they can give you the guidance to build one.

As a rule of thumb, one inch of rain on a 1,000-square-foot roof can yield 500 gallons of captured rainwater, but gardeners aren’t the only beneficiaries. New York City has what’s known as a “combined sewer system,” which means household waste and rainwater runoff go to the same place. That’s all well on a dry day, but heavy rains can overwhelm sewers, causing untreated waste to pour into the Hudson River, East River and Jamaica Bay.

Lenny Librizzi, assistant director of GrowNYC’s Open Space Greening Program, estimates that these systems collect about a million gallons of water per year. Which is good for much more than just those tomato plants.